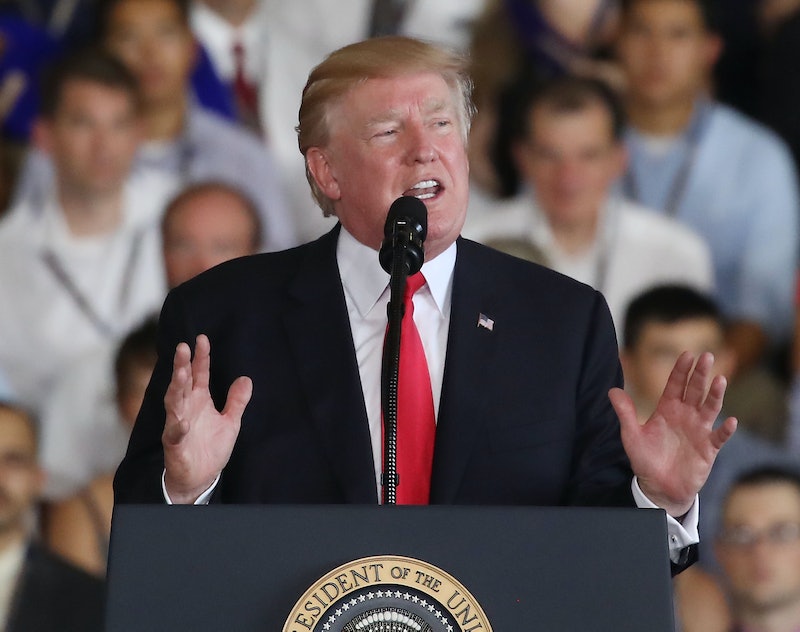 President Donald Trump's appearance at the National Scout Jamboree in West Virginia caught the attention and anger of critics on Monday when his speech shifted into highly political territory. The Internet responded to Trump's Boy Scouts speech, calling it "shameful," "icky," and "sad," among other things. Some even criticized the president for rehashing some of his oldest talking points to the crowd of children and essentially turning the event into a rally.

In his short speech, Trump managed to trash talk Obamacare, threaten to fire Health and Human Services Secretary Tom Price if his healthcare agenda doesn't get passed, take aim at his former presidential opponent Hillary Clinton for her campaign style, go after the "fake media," retell the story of his electoral college victory, talk about how people don't say "Merry Christmas" anymore, criticize (and encourage booing of) former President Barack Obama, and tell a long-winded story about being invited to another rich man's cocktail party. All in a day's work, right?

Trump's critics were troubled by the way the event seemed to mirror Trump's other rally appearances — particularly how it emphasized pro-Trump patriotism (and the "loyalty" he's so crazy about) without ever really offering too much of substance to the kids.

Considering the young audience involved, Twitter was full of people worried about the kids: