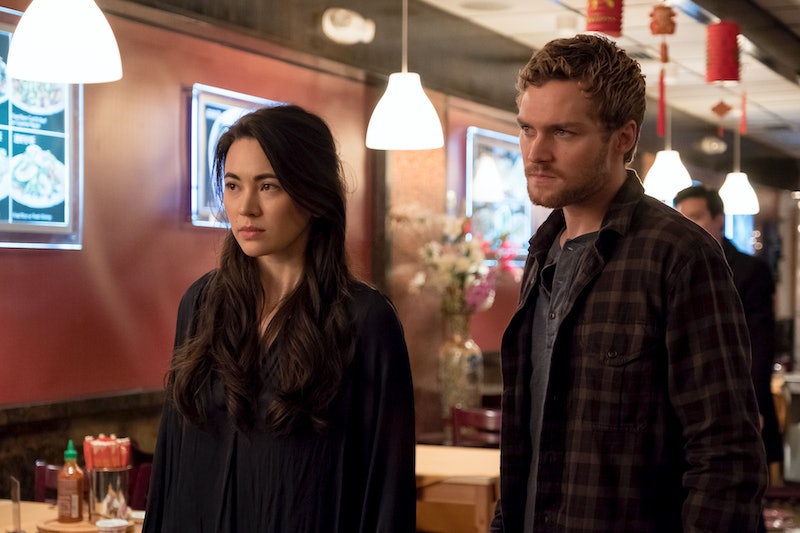 Spoilers ahead for Season 2 of Iron Fist. Iron Fist Season 2 explores assumptions that the characters have made and breaks them apart. Only Danny Rand can wield the power of the Iron Fist? Think again. Believe Mary to just be a kind-hearted artist who takes a liking to Danny for no reason? Not so fast. Meanwhile, a reference to the Pirate Queen Of Pinghai Bay in Iron Fist Season 2 seems to be an Easter Egg for fans at first, but it forces the characters and the audience to reckon with the possibility that Colleen Wing's mother may be alive after all these years.

While on the case to find Davos, Colleen Wing hears someone recalling a story they were told about "a princess and this fisherman she falls in love with. He's in hot water with a pirate king, whatever that is, and is marked for death. She goes to save him. The princess ends up taking down the pirate and takes over his ship." Colleen Wing instantly recognizes it as the plot of "The Pirate Queen Of Pinghai Bay," a bedtime story that her own mother made up.

Oddly, Danny takes interest not in the fact that Colleen's supposedly deceased mother is running around telling stories to black market antique dealers, but starts questioning the details of the story. Danny asks "Where would your mom hear a story like that?" and starts pressing Colleen for the name of the princess and the year the story took place in. It's almost as if Danny had read the Iron Fist comics, because he appears to know that The Pirate Queen Of Pinghai Bay isn't a story — it's a title associated with legendary Iron Fist Wu Ao-Shi.

The story of Wu Ao-Shi, the Pirate Queen of Pinghai Bay, is a little different in the comics than it is in the show. Wu Ao-Shi and the fisherman were both citizens of K'un-Lun, with Wu Ao-Shi on track to become the next Iron Fist. She eventually does so, but the violence in her life scares the fisherman, who leaves K'un-Lun to wander the Earth. Wu Ao-Shi follows, searching for him, when she eventually realizes that people on Earth need money to exchange for goods and services to stay alive. So she becomes a mercenary, and eventually gets kidnapped by a group of pirates when a mission goes awry. However, Wu Ao-Shi's powerful chi leads the fisherman to her, who frees her and then helps her take revenge on the pirates who kidnapped her — the pirates of Pinghai Bay.

Growing up in K'un-Lun, it's likely that the story of the Iron Fist who turned into a Pirate Queen was told to Danny Rand at some point, which suggests that Colleen's mother may not only be alive — but that she's from K'un-Lun. If this is true, the presence of Colleen's mother could bring about a huge shift in Colleen's life, or reveal that Colleen is descended from K'un-Lunians. Colleen may also have to talk with her mother about the fact that she was working with sworn enemies of K'un-Lun, The Hand for a bit, but that's hardly enough to ruin a family reunion that has been a long time coming.