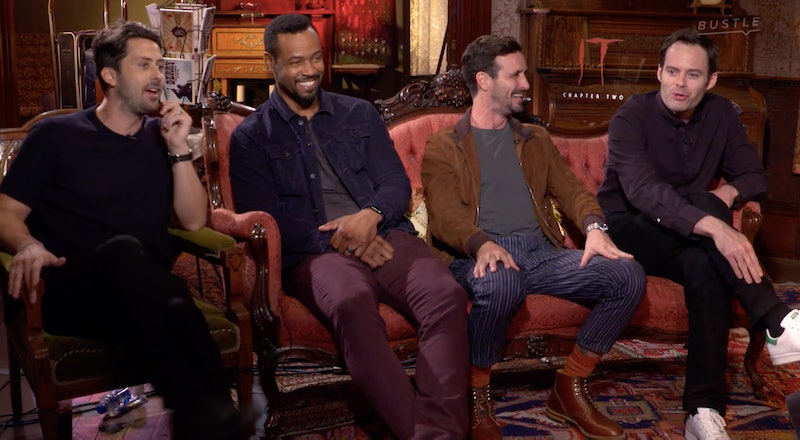 The 2017 horror film It, based on Stephen King's original novel, made history as the highest grossing R-rated horror film in history, beating a box office record previously held by The Exorcist. And now, the sequel It Chapter Two is hitting theaters on Sept. 6. The film is set 27 years from the first movie and boasts a huge cast, as fans will get to check in with the adult Losers (including the newly cast James McAvoy, Bill Hader, and Jessica Chastain) and see the young cast of the first film in flashbacks to the violent summer that first movie depicts. At the film's press junket in LA, Bustle tested both generations of It stars on some classic horror movie trivia, since they're now a part of a very bloody legacy.

Bustle entertainment reporter Ivana Rihter sat down with the cast and director Andy Muschietti and quizzed them on their knowledge of the iconic horror villains their own Pennywise is counted among. And they passed the test, though in some cases, needed a bit of a nudge.

Pretty much everyone knows who A Nightmare on Elm Street's Freddy Krueger is, and it's easy for Finn Wolfhard, who plays young Richie, and his adult counterpart Hader to identify the classic horror film The Exorcist from a mention of its iconic green, goopy vomit. James Ransone, who plays the grownup Eddie, adds a little fun fact, which is that the 1961 film actually uses pea soup for the barf. Hader tries to add another by saying that all the actors in the film were Australian, but Ransone corrects him, "They're from New Zealand, Bill! It's a totally different country."

Everyone's familiar with the iconic golden scissors from Jordan Peele's Us, as well as the creepy shower scene from Alfred Hitchcock's 1960 slasher film Psycho. Nothing really got past the cast, especially Wolfhard, Ransone, and director Muschietti, who knew the answer to a tough Hereditary question when the others turned up blank.

It joins the ranks of these horror films as it's solidified its place with a record-breaking release. The hope is obviously that It Chapter Two lives up to the first film. However, it doesn't seem like the adult cast feels any pressure for it to do so. Chastain, who plays adult Beverly, told Variety at the film's red carpet premiere in Los Angeles, “This ain’t my machine … I’m a peg. We’re all a part of the machine, I’m like a screw in the machine.” Hader agreed, saying that the pressure was "all on other people."

The younger actors, of course, feel a little more weight on their shoulders, having starred in both the first movie and its sequel. But, as Jeremy Ray Taylor (young Ben) explains, going into the first film there was already a lot of stress in translating one of Stephen King's mammoth novels. He told Variety, “To turn that in and do him justice is really hard to do and Andy [Muschietti, who directed both films] nailed it.”

You can see for yourself if that's true when It Chapter Two comes out this Friday.