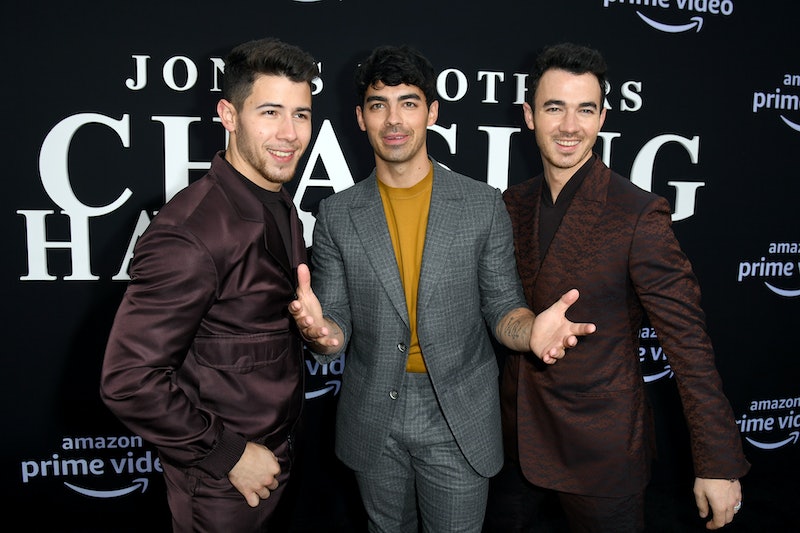 How are you handling the end of Game of Thrones forever? Decently? Gettin' through it? Well, odds are that no matter how bummed you are about it, you're most definitely handling it better than Joe, Nick, and Kevin Jonas because... they're not doing so great. The Jonas Brothers really miss Game of Thrones; in fact, they revealed how they're coping in a new video for their Harper's Bazaar cover shoot. And be warned that it's not only hilarious, it'll also increase side effects of OJD if you've experienced it in the past (Obsessive Jonas Disorder, in case you were unaware).

In the video, Nick is wearing a '70s inspired winter coat that looked an awful lot like Jon Snow's iconic fur, prompting Kevin to make a "winter is coming" GoT joke. How could be not? Joe, who recently married Game of Thrones star Sophie Turner, then just lost it, and this is where the story begins. He's visibly shaken up, on the verge of tears. But, it turns out, he's not the only one struggling to let go of the epic show.

Kevin deals with the show ending by reciting iconic GoT quotes, like Littlefinger's "Chaos isn't a pit, it's a ladder," or Jaime's "The things we do for love." Meanwhile, Nick is trying to play it off like he's unaffected, but his seeming obsession with swords and "swashbuckling" isn't fooling anyone. And then, of course, there's Joe, who can't even crack a smile, let alone focus on the shoot.

In all seriousness, Joe was probably the best emotionally prepared for the show's ending. After all, he knew how Game of Thrones ended due to the fact that he was on set for most of Season 8, and Turner told him the end. “I’ve just told Joe [Jonas],” Turner told Glamour UK, via Elle, in March. “But he’s so mad at me—he loves the show!” So maybe the Jonas Brothers video is actually just a recreation of how he acted after Turner spilled the beans on her becoming Queen of the North. She shrugged it off, though. “Well, I have to tell someone, otherwise I’ll burst.” Better spoil Joe than the rest of the world, that's for sure.

Turner later assured fans that she didn't totally ruin the show for her then fiancé, he had already figured out most of it for himself. “He was on set for most of it, so he kind of figured it out, and then he had to sign an NDA,” she told Good Morning America on April 2. “He had to have full photo approval on set, his camera was covered up, everything.”

And after the finale of his beloved show, Joe posted a pic on Instagram, with a caption praising the show and congratulating the cast on how it ended. "When you realize @gameofthrones is over vibes.... Congratulations to everyone that worked on this incredible show! life changing television. I have you to thank for introducing me to the incredible @sophiet 💜 long live the QUEEN OF THE MF NORTH." Supporting his queen is the only route to go, honestly.

While Joe, of course, can still be in his feels about the end of such a phenomenal piece of television history, crying in a bathtub isn't the way to go. He needs to get it together, because the Jonas Brothers reunion tour starts soon, and his fans need him!