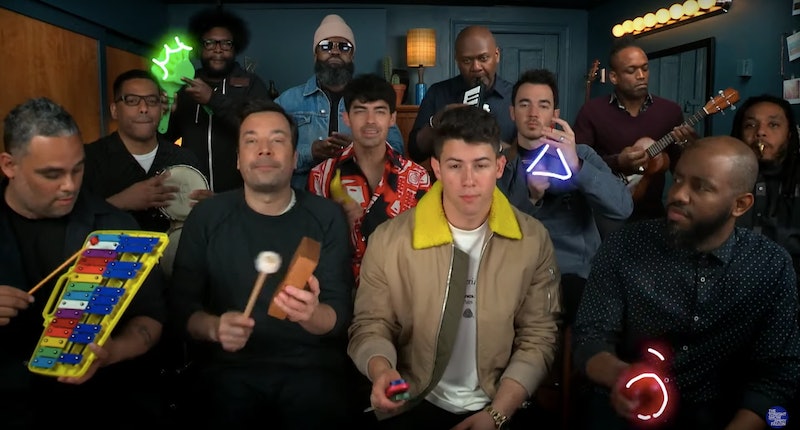 With the recent release of Happiness Begins, aka the Jonas Brothers' first album in 10 years, and their documentary Chasing Happiness, it seems like all eyes are on Kevin, Joe, and Nick Jonas as they take their second (and so far successful) stab at worldwide domination. Of course, a new album means the brothers are out doing promotion, which included a fun pit stop in New York City. To fans' delight, the JoBros visited Jimmy Fallon at The Tonight Show on Monday night, and they used classroom instruments to put a twist on "Sucker," the lead single from Happiness Begins.

The Jonas Brothers, joined by Fallon and The Roots, managed to turn "Sucker" — an upbeat, but sultry pop-rock jam in its original form — into a silly, quirky tune with their instruments of choice: a clapper for Nick, a "banana shaker" (whatever that is) for Joe, and the age-old classic triangle for Kevin.

Despite the change in sound, Joe and Nick still absolutely nailed their harmonies (was there ever any doubt they would?). Fallon, with his usual high-energy excitement, held down the fort with a wood block and an "avocado shaker," according to the video description (again, whatever that is). And even though they were cramming 12 people into one tiny green room, it was clear that everyone involved was having a ton of fun.

Classroom Instruments is a fan-favorite segment on The Tonight Show. Started in 2012 with Carly Rae Jepsen and "Call Me Maybe," the segment has since included musical stars like Adele, Shawn Mendes, and the Backstreet Boys, so it's nice to see the Jonas Brothers join those ranks.

Fans reacted to the video on Twitter by hyping the boys up, and also wondering what Joe was doing with a banana, which, same.

This musical experiment is just another example of the Jonas Brothers killing it on the late-night circuit since the announcement of their comeback. They took over The Late Late Show with James Corden back in early March, and fans delighted in seeing them joke around with each other and Corden, so it seems like people are hungry for more JoBros content on late-night TV.

It makes sense, then, that the Classroom Instruments segment is not the only way Fallon plans to connect with the band. Kevin, Joe, and Nick are scheduled to come back to The Tonight Show on Wednesday, June 12 both to perform as musical guests and to chat with Fallon for an interview.

The last time any of them had been a guest was in September 2018, when Nick appeared by himself and took the "Which Jonas Brother Are You?" quiz from BuzzFeed. (He got Joe.)

At the time, the band's reunion had not yet been announced, but Chasing Happiness shows the brothers had reconnected and discussed getting back together on a trip to Sydney, Australia months before in June 2018, so Nick could have been hiding the secret of their eventual return from both Fallon and the audience the entire time.

While hopefully there won't be any secrets this time around, fans are eagerly anticipating the Jonas Brothers' night on The Tonight Show, and if this Classroom Instruments performance is any indication, it's bound to be a lot of fun.