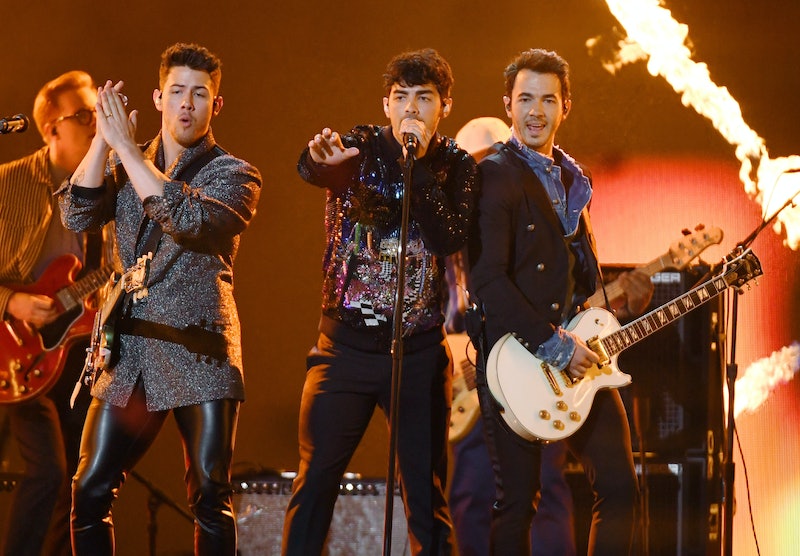 The Jonas Brothers are back, and they aren't slowing down any time soon. After reuniting on the Billboard Music Awards stage earlier this month for their first live show in years, the Jonas Brothers performed on SNL on Saturday night, where they pulled out a throwback to their Disney days. It was their first appearance on the sketch series in a literal decade, and like their stint at the BBMAs, it managed to combine the best of their old and new music.

The release of the Jonas Brothers' "Sucker" marked one of the biggest comebacks in recent music history: it debuting at No. 1 on the Billboard charts in March, marking their first No. 1 single ever. It came as no surprise, then, that they chose to perform it on SNL. But what fans couldn't have predicted is that the band would also be playing defendants in court accused of "burnin' up" a vacation house (don't worry, the judges overseeing the case adopted them and let them off the hook). Clearly, the comedic timing the JoBros fine-tuned during their days at Camp Rock are still strong.

However, their 2019 SNL appearance was a little less involved than their SNL debut 10 years ago, when they held their own against Alec Baldwin in a sketch that cast Baldwin as a fourth Jonas Brother, not to be mistaken with Frankie "Bonus" Jonas, that the rest of the Jonas' needed to kick out of the band.

While the cameo was a nice surprise for anyone who enjoys seeing the Jonases cut loose and get goofy, they saved the night's biggest surprise for last by following their single "Cool" with a classic Jonas track that is undoubtedly hot.

Prior to "Sucker," the Jonas Brothers' biggest song was their 2008 track "Burnin' Up," which peaked at No. 5 on the Billboard Hot 100. The brothers treated fans to a surprise performance of the classic track during SNL's second musical interlude, and based on Twitter reactions, everyone watching just about lost their minds.

The JoBros previously performed Nick's single "Jealous"and Joe's band DNCE's "Cake By The Ocean" at the BBMAs alongside "Sucker," and their SNL medley is a good indicator that their upcoming tour will similarly feature a mix of new and old material. The JoBros may be in a new era, but they certainly haven't forgotten the fans who supported them back in 2009 before they even had a No. 1 single.

While the Jonas Brothers had already been back in the mainstream culture for a few months by the time they hopped back on the SNL stage, their performances during the show felt like a victory lap for a group that appears to be in the process of pulling off one of the most successful comebacks in pop music history. Hopefully it won't be another 10 years before they return to SNL again, but if they happen to take another hiatus (knock on wood), they certainly gave fans a performance for the ages.

More like this
Kate Bush Revealed The Real Meaning Behind 'Running Up That Hill' Lyrics
By Darshita Goyal
24 Years Ago, 'Friends' Dropped Its Most Underrated Ross & Rachel Episode
By Grace Wehniainen
Netflix Reveals First Look At Wednesday In The 'Addams Family' Spinoff Series
By Bustle Editors
'School Of Rock' Changed Joe Keery's Life Forever
By Alyssa Lapid
Get Even More From Bustle — Sign Up For The Newsletter