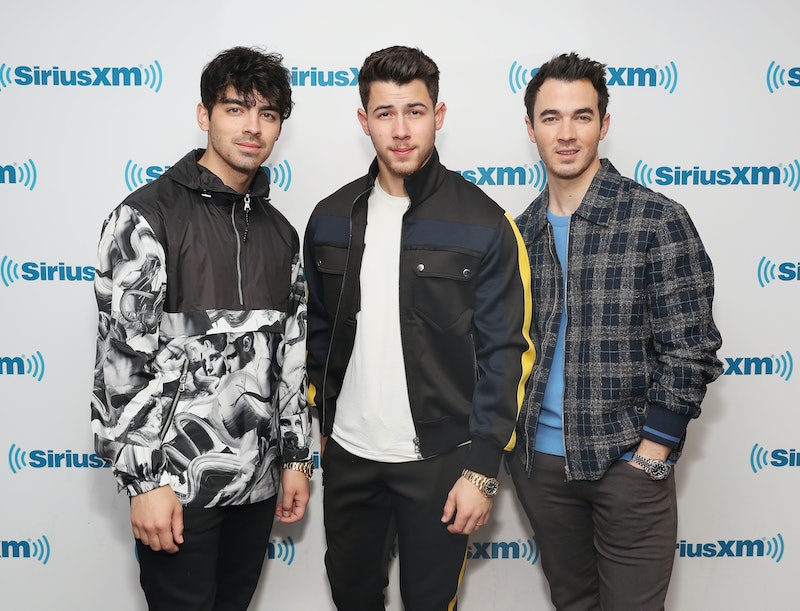 "This feels like the perfect #FlashbackFriday video," the band wrote alongside the clip on their social media platforms, from their 2009 episode of SNL, which was hosted by the model's uncle, Alec Baldwin. #VideoGirl on @nbcsnl in 2009! PS - thanks for the intro @haileybieber 😎" Baldwin — who married Justin Bieber back in September — was just 13-years-old at the time, and, as she revealed on Bieber's Instagram Story in March, was a massive fan of Nick, Joe and Kevin.

While Baldwin didn't react to the post on social media, she did talk about introducing the band during an appearance on the The Tonight Show Starring Jimmy Fallon in April 2018. "It sounds really cool when you say I was 'on' Saturday Night Live when in reality, I just went on there with Alec and introduced the Jonas Brothers when I was 13," the model recounted with a laugh after Fallon brought up her appearance in Studio 8H. "I was into it, for sure."

Despite her JoBros fandom, Baldwin revealed that it was actually her uncle's idea to have her introduce the band. "We went to Saturday Night Live when they performed, and Alec was like, 'Hey, come out with me, I want you guys to help me introduce their performance,' and I was like, 'Okay!'"

But even though that connection might have been the highlight of tweenage Baldwin's life, she admitted that she never talks about her fandom anymore because she interacts with the band all the time, now that they're all adults. "It is a little weird to say now [who my favorite was] because I do see them out and see them places and we're kind of all the same age now," Baldwin confessed with a laugh.

Whether or not Baldwin will return to Studio 8H on May 11 to introduce the Jonas Brothers once more, the band will likely continue to indulge all fans' nostalgia on their upcoming reunion tour — after all, Nick did tell James Corden that he was most excited to perform "Lovebug" on the road — while also paying homage to their new, grown up lives and sound.

"When we started to figure out what the sound was going to be like —balancing Nick's sound, DNCE's sound and, to be truthful, Kevin's bringing so much heart into this," Joe said on the Elvis Duran Show in March. "It's been incredible — his stories, his family and everything that he has going on now, it was really important to be able to blend the three and so, we have probably 30, 40 songs recorded that we can't wait to release."

Their May 11 SNL performance will likely reflect their new, grown-up sound, but for a few moments at least, fans can always return to the glory days of 2009 thanks to their pre-show throwback clip.