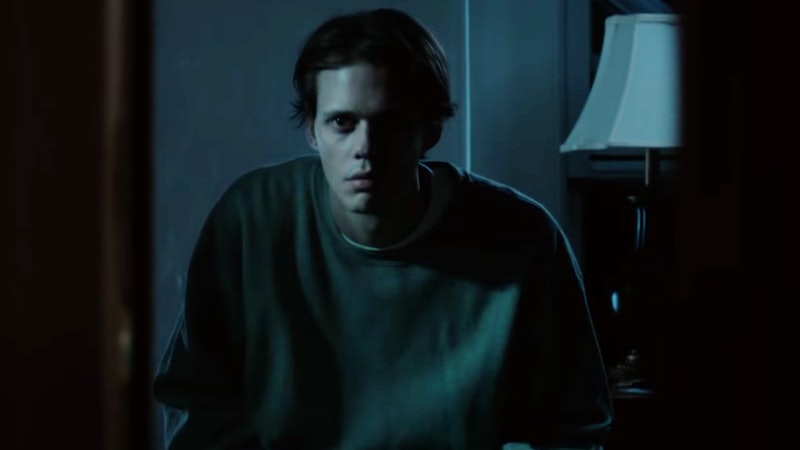 Out of all the mysteries brewing in the town of Castle Rock, Maine — and there are many — by far the most intriguing and inscrutable is the identity of the Shawshank prisoner known only as "the Kid." Most theories about the Kid on Castle Rock revolve around him being some sort of villain: a new incarnation of The Stand's Randall Flagg, or perhaps Flagg's son, or maybe even the Devil himself. But what if the Kid isn't evil at all? Spoilers ahead for the first five episodes of the series.

It's easy to see why so many viewers assume the character is bad news. First of all, he's played by Bill Skarsgård, who famously personified the shape-shifting clown monster in the 2017 big screen adaptation of Stephen King's IT. Secondly, his general bug-eyed appearance and ominous silence is admittedly pretty creepy. And finally, bad things do tend to happen around him: people who get too close to him end up dying of cancer, or gunning down their coworkers, or murdering their families at birthday parties.

But what if the Kid isn't trying to make these bad things happen? In fact, what if he feels bad about all the terrible events he's caused? In the most recent episode, he almost jumps off a roof seemingly out of guilt, and he even tries to build himself a makeshift cage in Molly's office to replace the one he was locked in for 27 years. But why?

Appropriately monikered Redditor jackie-torrance has a theory. According to this fan, the Kid is a "vessel for Castle Rock's sin" — but a cracked one, a broken vessel who occasionally allows some of the evil and pain inside him to accidentally leak out into the world. There are several pieces of evidence that support this theory. First of all, there are the aforementioned signs of guilt, which point to the fact that whatever bad things the Kid are causing are happening against his will. There's the fact that Castle Rock has been "boring" since the '80s (according to Jackie Torrance), signifying that none of the sins leaked out into the town during the 27 years the Kid was locked up in his cage. And finally, there's what Molly said about eavesdropping on the Kid's mind: "It's like I was listening to the pain of everyone in this town, all at once."

If this is true — if the Kid really is some sort of flawed receptacle for the evil residing in Castle Rock — then what is he, exactly? jackie-torrance hypothesizes that the Kid is a Sin Eater: a real medieval job where someone would charge money to ostensibly eat bread soaked in the "sins" of a recently deceased individual in order to guarantee the departed's entry into heaven. (TV audiences may remember the phrase from the FOX series Sleepy Hollow, where John Noble portrayed a Sin Eater named Henry Parrish.)

But Redditor SpiritedSun has a different idea: according to their theory, the Kid is a literal "scapegoat." (Get it? The "kid" is a "goat"?) In Biblical lore, a scapegoat was an animal that was symbolically laden with a community's sins and then driven away into the wilderness to carry them away. Perhaps Reverend Deaver, in an attempt to save his town from the evil that cursed it, performed some religious ritual that burdened the Kid with the sins of Castle Rock (and granted him immortality, apparently); then Warden Lacy literally drove him away and locked him in Shawshank, and it wasn't until their scapegoat was unleashed that the evil returned.

Interestingly, the original Hebrew word for "scapegoat" was "azazel," named after the fallen angel. All this time, fans have been theorizing that the Kid was the Devil… and it may turn out that he's literally an angel. Wouldn't that make for a great twist?