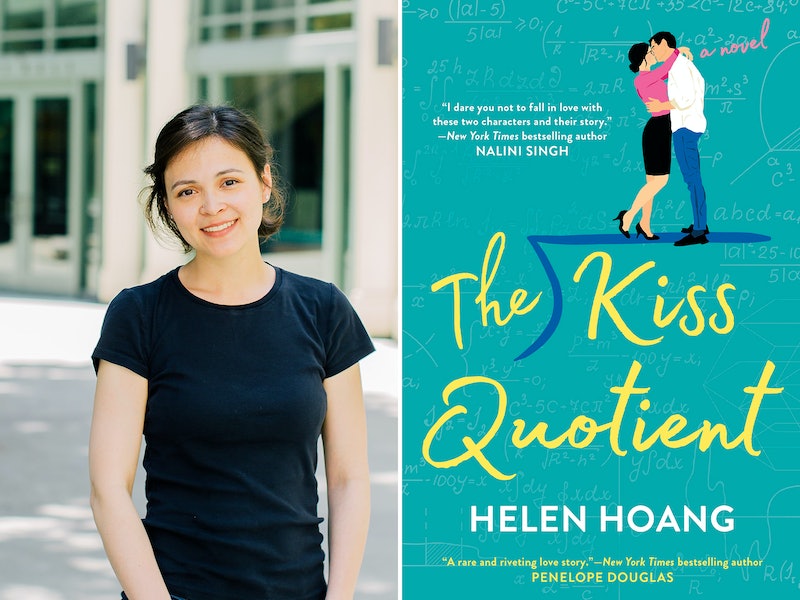 We talk a lot about championing Own Voices work in the bookish community, and for good reason. No one can more accurately, emotionally and powerful tell someone's story than themselves, and by raising up these authors we are making it possible for more diverse stories to make their way to the shelves. That's certainly the case for debut author Helen Hoang's romance novel The Kiss Quotient, out in June 2018. Bustle has the exclusive cover reveal and excerpt below!

The Kiss Quotient follows the story of Stella Lane, a woman with Autism Spectrum Disorder. Stella thinks math is the only thing that unites the universe. She comes up with algorithms to predict customer purchases — a job that has given her more money than she knows what to do with, and way less experience in the dating department than the average 30 year old. It doesn't help that French kissing reminds her of a shark getting its teeth cleaned by pilot fish. Her conclusion: she needs lots of practice — with a professional.

Which is why she hires escort Michael Phan. The Vietnamese and Swedish stunner can't afford to turn down Stella's offer, and agrees to help her check off all the boxes on her lesson plan — from foreplay to more-than-missionary position. Before long, Stella not only learns to appreciate all of the things he's making her feel. Their no-nonsense partnership starts making a strange kind of sense. And the pattern that emerges will convince Stella that love is the best kind of logic.

The Kiss Quotient sounds like a unique take on the typical steamy romance novel...and the Own Voices twist only adds an addition emotional element to the story. If you're already sold, check out the cover below!

The idea of utilizing sex surrogacy or sex therapy in and out of romantic relationships has become increasingly more mainstream in the last few years. But there are still a real lack of fictional stories about people who seek it out. And although Stella's take on the process is not exactly conventional, or licensed therapist supported, The Kiss Quotient seems like a refreshing take on the topic — with, of course, that added fantasy romance. Here's hoping Stella truly benefits from sex therapy... as unconventional as her methods may be.

Unfortunately you'll have to wait a few months to find out. The Kiss Quotient will be hitting shelves on June 5, 2018. Luckily, Bustle has an exclusive excerpt to tide you over until then. Keep reading!

Exclusive Excerpt from The Kiss Quotient

By the time Friday night rolled around, Stella was a jittery mess. She couldn’t stop her fingers from drumming on the restaurant table as she waited for Michael to arrive. She’d arranged the appointment through the agency’s mobile app—with the state-of-the-art set up, it was as easy as booking airline tickets, but without the frequent flier miles. They’d sent a confirmation email, but that was the only indication she’d gotten that the date was still on. She couldn’t help worrying Michael had changed his mind.

She wished she had his cell phone number, but she figured he never gave that to his clients. It was too personal. Especially if his clients had the tendency to get obsessed.

Which was actually one of her main weaknesses, and a defining characteristic of her disorder. She didn’t know how to be semi-interested in something. She was either indifferent…or obsessed. And her obsessions weren’t passing things. They consumed her and became a part of her. She kept them close, wove them into her very life. Just like her work.

Going forward with Michael, she had to tread carefully. Everything about him pleased her. Not just his looks, but his patience and his kindness. He was good.

She didn’t know how to be semi-interested in something. She was either indifferent…or obsessed.

He was an obsession waiting to happen.

Hopefully, she could keep a cool head during the coming weeks. Perhaps it was for the best there were only three sessions. Once they were finished, she’d focus on someone she could actually have. Like maybe Philip James.

When Michael entered the hotel restaurant, she noticed right away. Tonight, he wore a perfectly fitted black suit over a white oxford shirt. No tie. His collar hung open, drawing attention to his Adam’s apple and the sexy base of his throat. His gaze swept over the room and landed on her.

She looked down at the menu without seeing it, horribly aware of his slow advance toward her. Keep a cool head.

“Hello, Stella.” He sat down across from her and folded his hands on the tabletop.

Her lungs drew in a slow breath, and she caught his light scent. Everything inside of her turned over and sighed. With a sense of defeat, she lifted her eyes to his, counted to three, and looked away.

“Are you nervous already?”

She laughed slightly. “I’ve been nervous since Saturday.”

“About that… Who was that on the phone when I left?”

Her lips tightened as she tried to suppress a smile. “It was my mom. Her name is Ann. She thinks you’re my boyfriend now, by the way.”

He pressed a knuckle to his grinning lips. “I see. Will that be a problem?”

“Actually, I think it’s a good thing. Now that she thinks I have a boyfriend, she should stop trying to arrange blind dates for me.”

“Ah, the mother-arranged blind date. I’m very familiar with those.”

“Does that mean you don’t have a girlfriend?” As soon as the question left her mouth, she winced. “I’m sorry. Forget I asked that.”

She had no right to inquire about his personal life, but the intense curiosity burned inside her. She wanted to know everything about him. And if he did have a girlfriend, whoever that lucky girl was, Stella hated her guts.

“No, I don’t have a girlfriend.” He said it like it should have been obvious.

“What kind of girls does your mother try to hook you up with?”

She had no right to inquire about his personal life, but the intense curiosity burned inside her. She wanted to know everything about him.

He rolled his eyes. “Doctors, who else? And nurses. By now, I think my mom’s tried to hook me up with the entire second floor staff at the Palo Alto Medical Foundation.”

“That’s nothing. You don’t know my mom.”

She forced a smile and focused on the menu. What did it say about her that she wanted to know his mom? No, wait, she knew the answer to that. It said she was nuts. Mothers were scary she-bears when it came to their sons, especially sons like Michael.

And Stella wasn’t a doctor.

Enough of this. She wasn’t dating Michael. It didn’t matter what his mother thought of her. Stella was never going to meet the woman. She needed to get back to the matter at hand.

“That’s a good idea.” Michael leaned back in his chair, looking at ease.

Stella tried to copy his relaxed air as she retrieved three folded sheets of paper from her purse. “Because we’re pressed for time, I took the liberty of drawing up lesson plans. They’re not set in stone. In fact, please suggest changes where you see fit. I have no idea if what I’ve written is feasible, but it helps me to keep things structured. I don’t deal well with surprises.”

“Exactly.” She pushed the salt and pepper shakers and candle aside. After placing her papers in the middle of the table, she smoothed the creases out with her fingertips and pointed at the first sheet that was labeled Lesson One. “I put boxes next to each item so we can check things off as we go.”

Eyes on the paper, he opened his mouth to speak, caught his breath, and tapped a finger to his lips. “Give me a moment.”