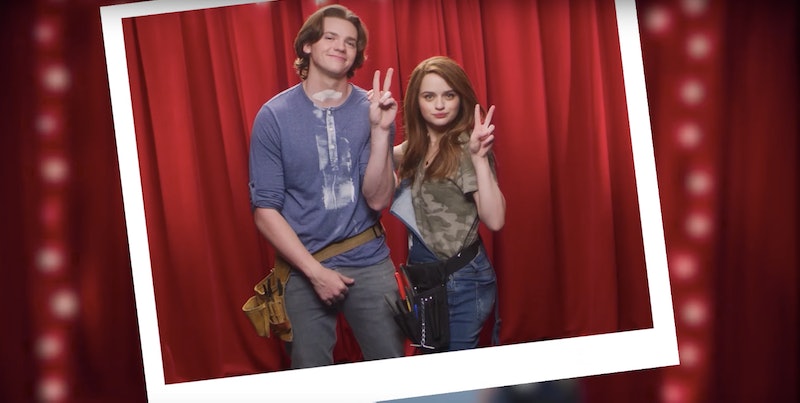 On Thursday, Feb. 14, Netflix announced that The Kissing Booth 2 is coming to the streaming platform — and its the Valentine's Day gift that you never knew you needed. Yes, the sequel to The Kissing Booth is officially happening. And it will reunite stars Joey King, Joel Courtney, and Jacob Elordi as they continue the tale, which is based on Beth Reekles' coming-of-age novel of the same name. Details surrounding the film still remain scarce. However, a press release reveals that the film is already in production, meaning fans could possibly have a finished product sometime this year.

In addition to the news, Netflix released a promo video that is sure to warm the hearts of rom-com fans everywhere. The clip features King and Courtney as they collaborate on building a handcrafted kissing booth. After the project is constructed, Courtney tells King, "I think we're just missing one thing," as he pulls out a wooden-piece shaped into the number 2. King snatches from him and hammers it next to the words "kissing booth" as they simultaneously exclaim, "nailed it" while high-fiving over their accomplishment. The snippet moves forward as the two dance in excitement about film's sequel. The pair, who play besties in the film, appear to be having a great time until the number falls off of the booth onto King's head while Courtney teasingly laughs.

Their camaraderie in the clip makes it clear that King and Courtney will pick up right where they left off in the inaugural film, reprising their roles as BFFs, Elle and Lee. With details surrounding the narrative still unclear, it is not known if Lee's older brother, Noah (Jacob Elordi) and Elle will still be together. It's quite possible that they've broken things off since fans saw Noah go off the college in the first film. Netflix seemingly intended to build suspense surrounding their relationship status by keeping Elordi out of the Booth 2 announcement video altogether. (King and Elordi are also reported to be a couple in real life, although there have been recent rumors of a split.)

As far as the sequel's narrative is concerned: filmmakers could potentially draw inspiration from Reekles' companion novel The Beach House, which takes place during the summer before Noah goes off to college. That storyline, however, would take some tweaking since that's not quite where the first movie left off.

Although the plan for a Kissing Booth sequel has, obviously, been in motion for some time, King managed to play it cool when asked about the possibility of KB 2 just days ago.

"Right now, we're not really sure," King told TV Guide at the Television Critics Association winter press tour on Monday, Feb. 11, "[The cast] would love for that to happen, but everything is still up in the air. We're still waiting on [Netflix]."

All-in-all, it seems that the sequel was an inevitable choice for the streaming giant following its Spring 2018 debut. Last May, Netflix president Ted Sarandos' told Deadline that The Kissing Booth is "one of the most watched movies in the world right now."

The Kissing Booth 2 announcement couldn't have come at a better time — arriving for fans on the world's most romantic day.