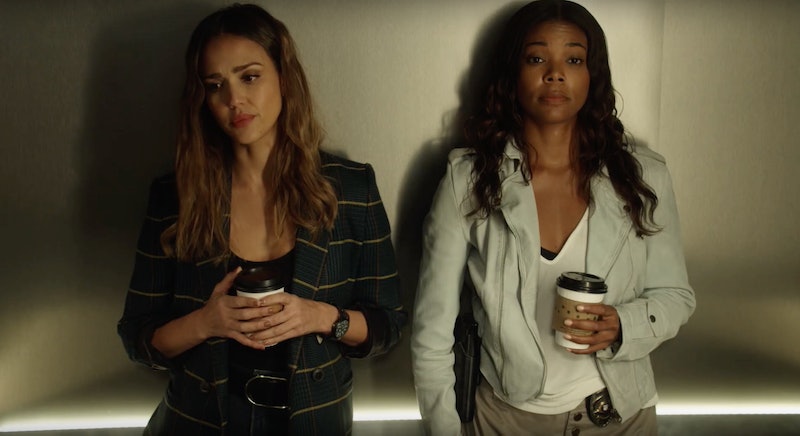 Fans who loved Syd in the Bad Boys franchise are in for some great news. Gabrielle Union is reprising her role for a new cop drama, and it looks thrilling. Union and Jessica Alba star in the L.A.'s Finest trailer as a set of detectives who are both playing bad cop, and it looks like a real treat.

Fans of Bad Boys II will remember that Union's Syd was Martin Lawrence's character, Marcus Burnett's, sister. But in the spinoff series, Syd is her own person, and it doesn't look like she answers to anyone.

As the show's title suggests, Syd is now an LAPD detective, and she's partnered with Alba's character, Nancy. Syd was once undercover for the Drug Enforcement Administration, Shadow and Act noted. But it looks like she's moved on to a new city and a new outlet for fighting crime.

In the new trailer, it looks like Nancy and Syd's partnership is off to a somewhat rocky start. Though they initially bond over the outrageous things they've done in the past — namely, Syd breaking the windows of an ex's car and Nancy stabbing someone with scissors — there's a good amount of tension between them, too.

There's one moment where Nancy tells Syd that they "have to trust each other," further suggesting that their partnership isn't smooth sailing at first. Still, this is a TV show, so there are sure to be plenty of character-bonding moments for the two detectives as the show goes on. And despite their differences, it looks like Nancy and Syd will be a good detective pair, too.

As Bustle previously reported, the idea for L.A.'s Finest seems to have come from Union herself. Apparently, Union had been reminiscing about where some of the characters she's played over the years would be now. After the trip down memory lane, she decided to contact producer Jerry Bruckheimer.

Evidently, plenty of people were on board with expanding Syd's story in a new TV series. It's not clear whether or not L.A.'s Finest will play into next year's Bad Boys 3. Either way, though, there's plenty for the new show to dive into before the next sequel.

And if you're wondering how to catch the upcoming cop drama, well, you won't be able to watch it on the same channels or apps as your other favorite series. L.A.'s Finest will be a Charter Communications series, Union tweeted last year, as NBC passed on the show after it was developed there. But the Spectrum series order will include 13 episodes, and it will be the first Spectrum Original show, Shadow and Act noted.

While fans might currently think of Spectrum as their cable provider, not as a home for original content, that could all change with the new show. After all, more outlets for new series should be a good thing, since fans will have more entertainment options. So it will be interesting to see where Charter and Spectrum take their original offerings after the Bad Boys spinoff premieres on May 13.