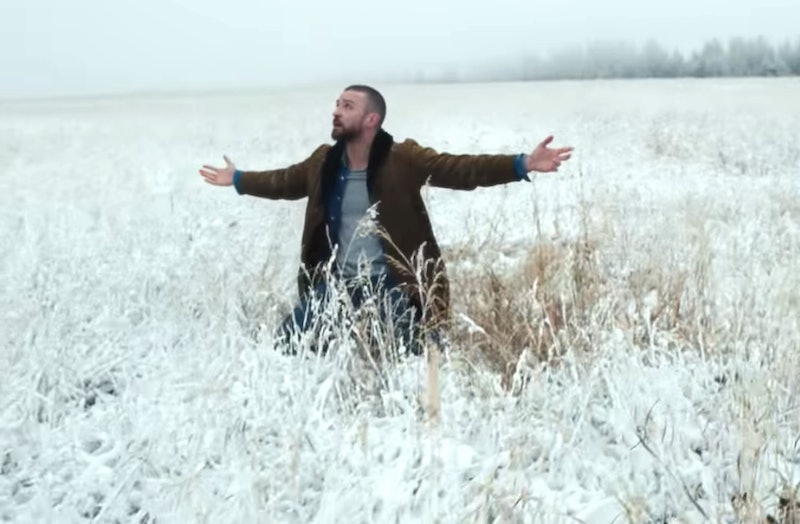 Before his highly-anticipated Super Bowl performance, Justin Timberlake released Man of the Woods after a rather confusing lead-in. After all, singles "Filthy" and "Supplies" hardly sounded Man of the Woods-y and were subject to mixed reviews by fans, who responded more positively to "Say Something" with Chris Stapleton. Now that the full album is out, the man speaking on Timberlake's "Sauce" might lead to more than a few people scratching their heads. As it turns out, the single samples an enlightening YouTube video that will make the exuberant song make a lot more sense.

Although initially speculated by Vulture to be "a song about pretending to enjoy whiskey" back when Man of the Woods was nothing more than a track list on Timberlake's Twitter, the actual lyrics of "Sauce" turned out to be about the confident pursuit of a nameless lover. "I love your pink. You like my purple," Timberlake sings over a funk-rock beat. "That cover right between those, that's where I worship. Let's make some new details up in your journal." Despite that, the fact that the songs opens by sampling an explanation of the difference between "juice" and "sauce" might need some context for even the most diehard Timberlake fan. Luckily, there is context.

As Complex reported in a 2017 article, Tupac Shakur's 1992 film Juice was released, and the plot followed "NYC teens were going ham in the city streets, all for a piece of the 'juice.'" (For reference, urban dictionary defines juice as "respect and credibility on the street.") In 2013, Gucci Mane explained the meaning of the slang phrase "the sauce" by saying that, "Even when I ain't had no money, I still had sauce. If you ain't go no money, then you're lost. But you can also get lost in the sauce." (Again, urban dictionary as "confidence... you can sprinkle sauce to others [but] you aren't born with confidence, you learn it (becoming seasoned).")

Hence why, as @Gino_Russ explains, "Juice is temporary. Anyone can obtain the juice... it's something that kind of comes and goes. Sauce is forever." Respect is fleeting, but confidence lasts. And that's the theme that Timberlake was apparently hoping to bring to his Man of the Woods single "Sauce," though how effective he was at it is really open to interpretation. He certainly seems to be exuding confidence, but, according to The Guardian's Alexis Petridis, "'Sauce’s ungainly lurches from funk-rock to Nashville and back again... flatly awful." According to Time Out London's Oliver Keens, Timberlake's colorful imagery, "[sounds like] a ghastly innuendo. If not, mate: see a doctor." And, according to NME's Leonie Cooper, the song features a "deeply rude" line — and she "[hopes] his mother isn’t listening."

Ultimately, "Sauce" might not be the best song on Timberlake's Man of the Woods, or even the most Man of the Woods-y, but the singer clearly took some risks with this new album. Whether you loved it on the first listen, are hoping it'll sound better when and if he performs it during the Super Bowl, or never want to hear this song again, at least you now know the difference between the juice and the sauce — if you didn't already. So, there's that.