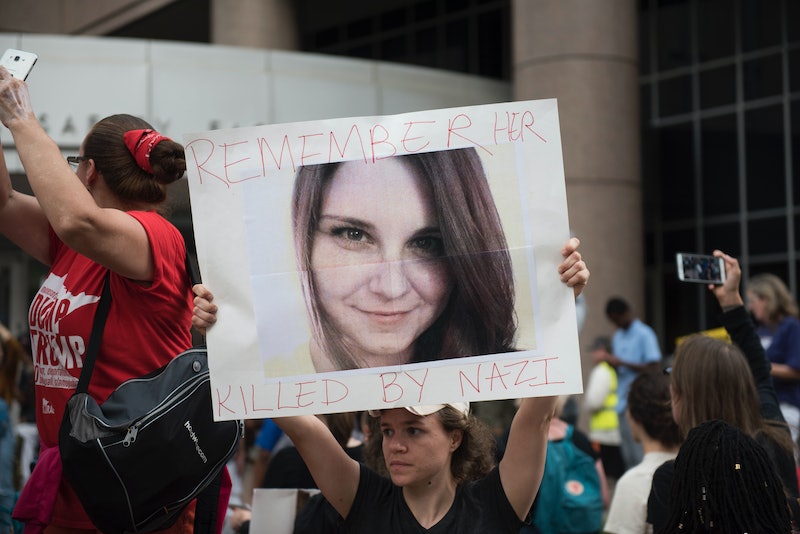 In August 2017, the neo-Nazi rally in Charlottesville, Virginia, shook the country to its core. When counter-protestors clashed with the gathering of white nationalists, the protests turned bloody. One woman, Heather Heyer, lost her life when a self-described neo-Nazi, James Alex Fields Jr., drove his car into a crowd of counter-protestors. Now, the man who killed Heather Heyer in Charlottesville has just been sentenced to life in prison for his actions at the rally.

Only four days prior to his sentencing, Fields was found guilty of murder in the first degree after about a week of testimony in Charlottesville. According to The New York Times, the jury concluded that he had driven his car into the crowd of counter-protestors intentionally. As Vogue explained, Fields still faces 29 hate crime charges: 28 charges of "hate crime acts causing bodily injury and involving an attempt to kill" that referred to the numerous other counter-protestors who he injured with his car, and one charge of a "hate crime act resulting in the death of Heather Heyer." The trial that has just resulted in life in prison for him, however, was on an entirely different set of charges, as the date for the hate crime trial has not yet been set.

In the end, the jury convicted Fields on 10 different charges, according to The Washington Post. The resulting sentence is life plus an additional 419 years in prison, plus fines amounting to $480,000.

While Fields' defense lawyers argued that he “acted out of fear” when he drove his car into the crowd — which they did not contest that he had done — prosecutors were able to convince the jury of his murderous intent using numerous different pieces of evidence, according to The Times. This included an Instagram post of his that showed a car driving into a crowd of protestors and a text conversation with his mom in which he sent a picture of Hitler and told her that “We’re not the one[s] who need to be careful" after she told him to be careful.

Prior to Fields' sentencing, numerous people affected by his actions gave victim testimonies to the jury, as The Daily Beast recounted.

“Heather was full of love, full of justice, and full of fairness. Mr. Fields tried to silence her, but I refuse to allow that,” Susan Bro, Heyer's mother, told the jury, according to The Daily Beast. “My family has been to therapy as the darkness has tried to swallow us whole. We are survivors, but we’re much sadder survivors.”

"Please know that the world is not a safe place with Fields in it," said Wednesday Bowie, one of those whom Fields injured with his car, in her testimony.

According to The Washington Post, Fields will now wait in a Virginia state penitentiary before his federal hate crimes trial. While one of his charges holds the possibility of the death sentence, The Post wrote that the Justice Department has not announced whether or not they will seek it in Fields' case.