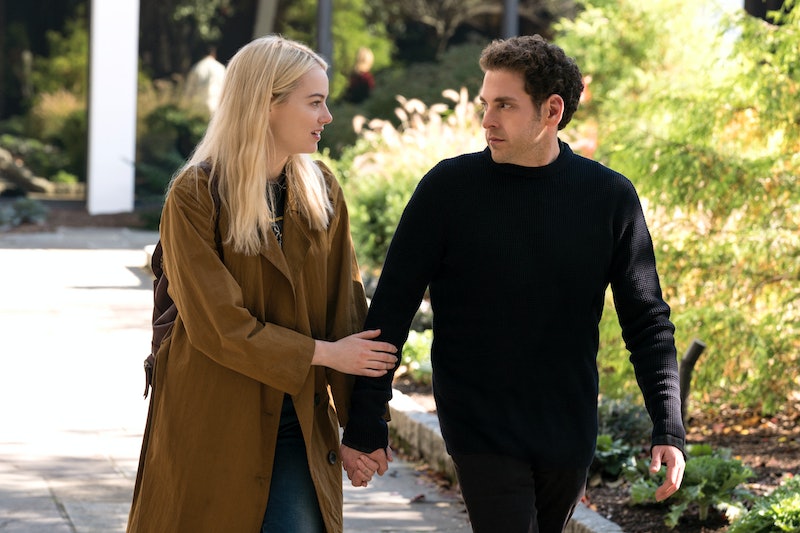 Spoilers for all of Maniac ahead. Throughout its 10 episodes, Maniac is, overarchingly, a bleak and pain-steeped show, so it's somewhat unexpected that the Netflix miniseries gives its protagonists a seemingly hopeful resolution. In the Maniac ending, Annie and Owen confront their past traumas, make it out of the trial (mostly) unscathed, and, after a brief separation, rekindle their friendship and ride off to Salt Lake City — where Annie had long planned to take her sister. But before viewers can take comfort in this light at the end of the tunnel, the show once again subverts reality. In the Maniac end credits scene, a hawk and dog pop up on-screen and follow the car's path, calling into question whether Annie and Owen actually escaped GRTA's attempt to trap them in their subconsciouses, or if they're just in another simulated fantasy. So what's the deal?

First, let's break things down. In "Option C," Annie is finally able to accept her sister's death and move forward with her life, while Owen stands up to his browbeating family and tells the truth about his brother Jed, who blackmailed him into testifying in his favor after being accused of sexual misconduct. Unfortunately, Owen's family then has him committed to a psychiatric ward. At this point, he and Annie aren't speaking — after the experiment, they decided to go their separate ways — but Annie shows up to rescue him as soon as she finds out what's happened. Owen, who's still struggling with his potential schizophrenia, is initially hesitant to believe she's real, but eventually agrees to let her break him out — which is how they wind up on the road to Salt Lake City.

Viewers may recall that after the lost chapter of Don Quixote heist, Owen told Annie he had a dream that they'd run off together. "We were gonna go somewhere together. We were in a car. We were driving really fast. Someone was chasing us, I don't know who. It felt like an escape. I was just laughing. And I had this huge smile on my face. It hurt it was so big. We were just two people looking out for each other," he explained.

This lines up exactly with how the series ends, suggesting that it may just be another fantasy. Further complicating things, the trial's creators, James Mantleray and Azumi Fujita, drive by Annie and Owen as Mantleray launches into the voiceover that opened the show — which seems a little too coincidental to be real. That brings us to the hawk and dog.

Though animals are important throughout the miniseries — there's the lemur Annie and Owen rescue from the fur store, the owl at the Neberdine séance — these two are especially significant. The dog is Groucho, Annie's sister Ellie's former pet, who Annie lost, and the hawk is a callback to Owen's brothers, who mocked him in the first episode for once nursing an injured hawk back to health. When the hawk ate Jed's gerbil, Owen's brother killed the hawk. Owen also turns into a hawk when he tries to save Annie from GRTA, but is ultimately thwarted. Groucho then, represents the memory of Annie's sister, while the hawk represents Owen's desire to protect those around him, sometimes to a fault. In the end, those things are still a part of Annie and Owen, but they're no longer holding them back — which means that Groucho and the hawk don't signify that Annie and Owen are still trapped in their minds, but rather the real freedom they've finally been able to achieve.

To strengthen the point, the show's creator, Patrick Somerville, confirmed to The Hollywood Reporter that the ending of Maniac is intended to be hopeful. "It is pretty dire in the beginning episodes: life is sad, these people are lost. And there's no way to do the show, to me, unless you go to a much more hopeful place by the end. There's no justification for punishing the audience in that way, unless there's a hopeful story to pull out of it," he said. "To me, the story is two people who have not accepted who they are at the front end of the show, both finding a way to do that for themselves, and the fruits of that being that you get to have new relationships."

Of course, art is open to interpretation. But if you go by Somerville's vision, then you don't have to view the hawk and the dog as a despairing sign Owen and Annie are still stuck in their imaginations. Instead, the animals symbolize Annie and Owen releasing the part of their pasts that have for too long haunted them. And now, they're moving on together.

To go back to Dr. Mantleray's theory that bookends the series, he says, "We're lost without connection." And that's what Maniac is all about in the end. The trial — whether it was scientifically successful or not — actually gave Annie and Owen the ability to connect to another person, and not through Friend Proxies or Ad Buddies or self-help books by Dr. Greta Mantleray. Their connection is legitimate and while they might not be healed completely, in the words of Annie, maybe they'll get there someday.

More like this
There's At Least 1 Major Difference Between The 'Vampire Academy' Book & TV Series
By Grace Wehniainen
The ‘Emily In Paris’ Season 3 Release Date Is Here, Plus The First Footage
By Bustle Staff
The ‘You’ Season 4 First Look Shows Joe’s New Identity And Potential Victims
By Bustle Editors
Devi Is Going To Meet A “Smoldering Bad Boy” In ‘Never Have I Ever’ Season 4
By Jack Irvin and Gabrielle Bondi
Get Even More From Bustle — Sign Up For The Newsletter