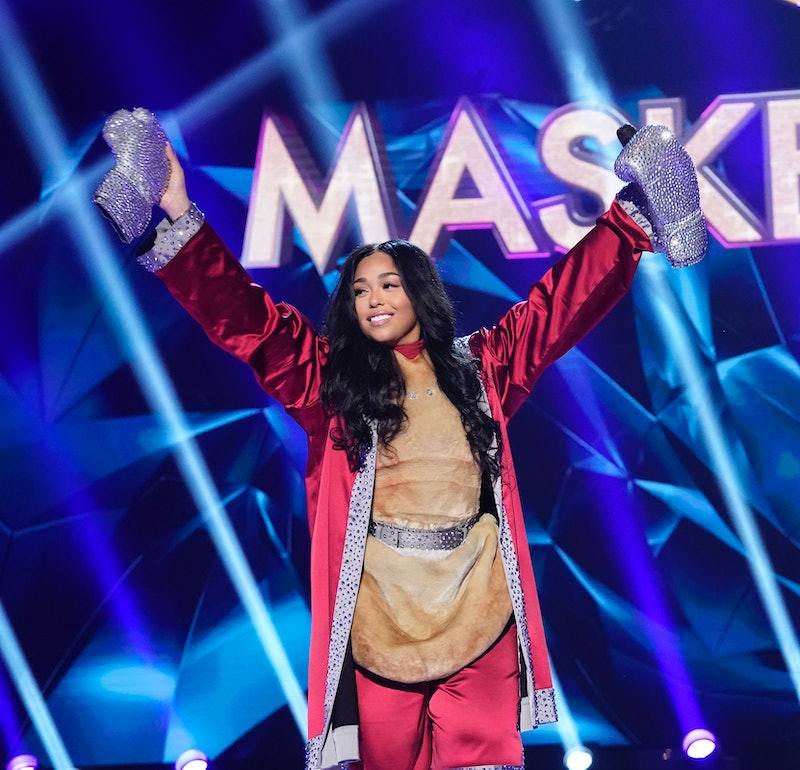 After wowing everyone on The Masked Singer as the Kangaroo, Jordyn Woods is ready to record an album. In an interview with People following her unmasking and elimination on April 8's episode (she lost to Astronaut during their smackdown), Woods confirmed music is still very much in her future. And when social distancing comes to an end, the 22-year-old told the publication that one of the first places she'll visit is the recording studio.

"Yes, there will be an album!" Woods told People. "Stay tuned for when this is over and I can actually get to the studio to record the music I’ve made." It sounds like fans won't have to wait long, as she hinted that she's already created songs for her album. It's unclear if she's written music or has had help from other songwriters. Whatever the case, Woods has made a name for herself musically as the Kangaroo on The Masked Singe, and she's not giving it up.

During her final episode and prior to her unmasking, Woods shocked viewers and the judges when she revealed The Masked Singer is the first time she's sang publicly. She told People that it always just a dream for her. "I felt like The Masked Singer was one of those opportunities of a lifetime where you can’t pass up if you get the opportunity to even be on it," she said. "And singing and music is something I’ve always loved, but it was a childhood fantasy. I didn’t think I would ever be on stage performing."

Throughout the weeks, the Kangaroo has spoken about her nerves performing, something Woods reiterated in her farewell to The Masked Singer, telling the judges that they helped build up her confidence. She later thanked the show in an Instagram post with a pic of herself holding her Kangaroo mask. "It was the experience of a lifetime and I couldn’t be more thankful," she wrote. "The kangaroo mask may be off for good but this is just the start of something so exciting."

Not only has she proven that she's much more than someone who was once friends with Kylie Jenner and involved in Kardashian-Jenner drama, but that she has a true talent that she's ready to share with the world — and without a mask.