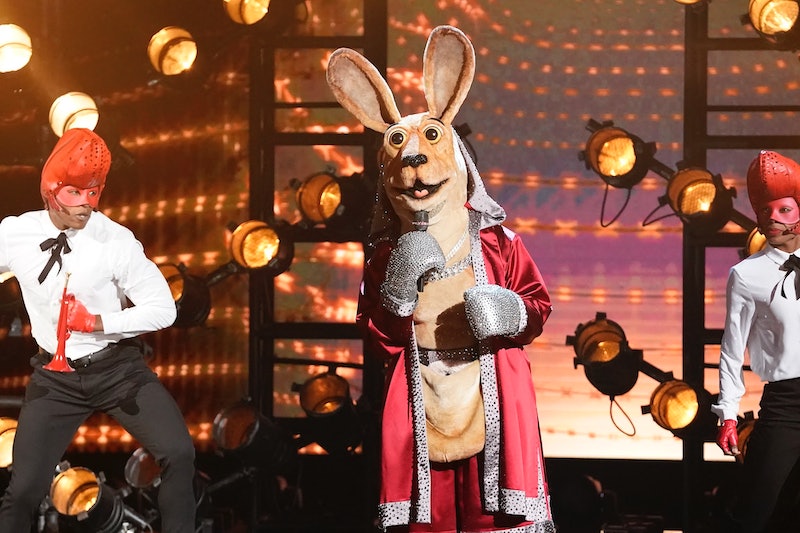 Two contestants have already gone home on The Masked Singer Season 3, but it sure looks like the Kangaroo isn't bouncing out anytime soon. She's one of the frontrunners so far this season and after only two episodes, fans already have some convincing Masked Singer Kangaroo theories. And they both have ties to reality TV.

The first, and what seems like the most popular guess, is none other than Jordyn Woods, Kylie Jenner's former best friend. Not only does she sound like Woods, who was frequently featured on Keeping Up With The Kardashians and co-starred on Jenner's own reality spinoff Life of Kylie, but the clues add up. In the Kangaroo's first clue package, she expressed how she recently lost someone who held her family together. Woods' father died in January 2017 after battling cancer.

The Kangaroo also said that "by her own admission" she was in the spotlight for "all the wrong reasons." She even said she "had to fight for her family" and show everyone that "bullies never win." Many thought this could refer to Woods' public falling out with the Kardashian-Jenner family following an incident with Tristan Thompson, Khloé Kardashian's ex and father of her daughter, True. Plus, Woods even appeared on Red Table Talk with Jada Pinkett Smith, where she admitted that Thompson kissed her, but said nothing "intimate" happened.

As for the Kangaroo's second clue package, there was plenty of evidence pointing to Woods. The video showed her playing basketball wearing the number 23, which could hint to Woods's birthday, Sept. 23. The basketball court shown was also named "Kangaroo Kourt," which could be another reference to the Kardashians and maybe even Kourtney Kardashian, as theorized by @ItsLisaD on Twitter. And, Kangaroo also said she had to be a good role model for her "little roo," which could be Woods' way of referring to her little sister.

As pointed out by Twitter user @adrianneromcel2, the Kangaroo said she was most likely to be on a list with Seal and Mike Tyson. Woods, like Seal and Tyson, used to have a gap in her teeth before closing it.

And, the gramophone shown in the first clue video could be referring to Woods' father, who was a television sound engineer on The Fresh Prince of Bel Air, as noted by @VickyDelece tweeted on Feb. 5.

As for that "Dee Jay" on the back of the basketball jersey's in the second clue video, Woods played a character named Dee on Freeform's grown-ish. So far, it all adds up.

If Kangaroo is not Woods, then there are plenty of fans who think American Idol winner Jordin Sparks might actually be the person behind the mask. As @AngelaG97348094 tweeted, Sparks' stepfather died in May 2019, which might be the loss the Kangaroo was referring to.

The 23 jersey number might also represent Michael Jordan, since they share the same name. (Jordan was was no. 23 on the Chicago Bulls). Or, the number could also refer to May 23, 2007, when Sparks won American Idol Season 6. And fans have floated the idea that the basketball court and sports references might refer to Sparks' passion for sports.

Another convicing clue: "Dee Jay" is also the name of Spark's son — though she spells it DJ — as @SkolShannon shared on Twitter. Remember, the Kangaroo also mentioned her "little roo."

Sparks has been out of the spotlight for awhile now and like the Kangaroo said, "it's scary putting myself in the spotlight again." As for the controversy that found her facing scrutiny, it's unclear how that could relate to the singer. But, Sparks did address criticism surrounding her husband, Dana Isaiah, in December 2019 about a photo he shared with a female friend.

And if that isn't enough, the gramophone might be Sparks' way of teasing about her Grammy nomination and the makeup shown in the second package could refer to Sparks once being an Avon spokesperson, as @EdenHonaker tweeted. (Then again, Woods also shared a Kylie Cosmetics collection with her former bestie.)