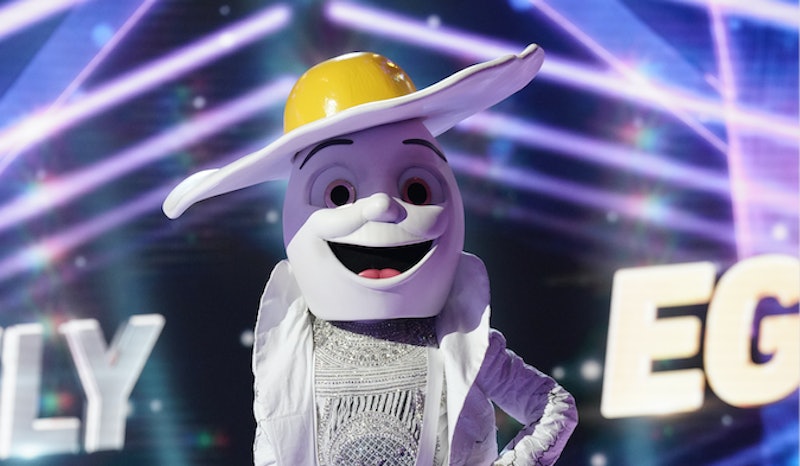 It's hard to imagine topping T-Pain dressed as a giant, blue, furry monster, but The Masked Singer Season 2 costumes are even stranger and more elaborate than the first time around. That's impressive considering the design team had even less time to craft them than they did in Season 1, for which they were given less than two months to put together characters for each of the celebrity performers, costume designer Marina Toybina told Deadline. In addition to the accelerated schedule, they also had four more costumes to create: Season 2 features 16 contestants, while Season 1 featured 12. But Toybina and her crew were up to the task.

"I am very proud of Season 2 because I think [with] everything that we've learned from [the] experiments and the dilemmas that we might've had in Season 1, we definitely upped our game," she told Deadline. "You'll see a lot more detail in all the costuming, you'll see a lot more elaborate creatures on stage, and I'm excited for people to see it."

The end result is 16 unique costumes that will keep fans guessing all season long. Here's who you'll see on the stage this time around — and how their outfits came together, as detailed in a sneak peek video shared ahead of the season.

Much like Season 1's Deer, this cyborg Fox looks like he was pulled right out of a steampunk novel. His outfit combines leather, metal, and cloth. According to the preview video, his furry tail alone took over 80 hours to construct.

The Skeleton costume looks like it was ripped straight from My Chemical Romance's Welcome To The Black Parade album cover. According to the preview video, every bone was hand carved — including a matching custom microphone — making it one of the most expensive suits of the season.

The person inside The Butterfly said the costume's wide wing span makes it a little hard to manage, but this attention-grabbing outfit is perfectly suited to the Masked Singer stage. According to the sneak peek video, it's the "most detailed [costume] the show has ever created," and features 10,000 individual sequins.

The Eagle's music festival vibe was a request from the celebrity it's disguising, who wanted to feature their "signature" red bandana. Could there be an actual rock star behind the mask? Perhaps even an actual Eagle?

Ice Cream was one of the heaviest and "most difficult" costumes to build this season, taking several weeks for designers to get the head's balance just right. Whoever is inside of it deserves extra credit just for being able to go onstage without falling over.

The ladybug was the only contestant not featured in the Masked Singer's sneak preview, so there isn't much known about the costume or any clues as to who might be in it.

Rottweiler was designed with a hip-hop aesthetic, hinting that the person beneath the massive dog head may be a recognizable rapper.

The Flower costume includes over 30 layers of hand-sewn petals. Its fitted dress design doesn't do much to hide the celebrity's silhouette, but that doesn't make it any easier to guess who it is.

Easily the most dapper outfit of the season, Penguin leans into the bird's butler-esque appearance with a stylized tuxedo. Over a dozen "fabricators" worked together to make Penguin's headpiece, which is apparently the most difficult of any mask to see out of this season.

Extra care went into ensuring that Panda had the largest head of the season, but the bear also arguably has the loudest outfit. Anyone looking for clues about the singer's identity should pay special attention to the '80s-inspired color scheme.

Season 2 of The Masked Singer is especially insect-heavy, but the show's only arachnid proved especially challenging to design. The hand-molded outfit required 100 feet of protective foam just to construct the legs.

One of two flora-inspired outfits this season, the Tree was inspired by 1950s pin-up models, with hula hoops serving as the basis for the tinsel-adorned rings.

With a patchwork suit and leopard-print glasses, Thingamajig appears to be a better-dressed relative of The Masked Singer Season 1's breakout star, Monster. According to Season 2's behind-the-scenes special, Thingamajig is covered in over 50,000 strands of hair and requires "dozens of hairspray cans" to maintain.

Leopard's Elizabethan outfit was constructed over 30 consecutive days and is designed specifically to hide the silhouette of the celebrity. Leopard claims to have "been spotted with the president," but they're dressed more for a meeting with the queen.

The Flamenco-inspired Flamingo required over 120 hours of construction and features more than 1800 pink feathers. The Flamingo claims to love mascara, which could be a joke about the mask's long lashes or a clue that whoever is behind the beak is associated with makeup, either as a creator or an enthusiast in some way.

Despite all the cracks in their outfit, the smile will never fade away from Egg's face. Over 2,000 stones and beads were used to make the majestic outfit, which was inspired by Fabergé eggs.

The Masked Singer may be about a bunch of celebrities participating in one of TV's weirdest shows, but it would be nothing without its funny, fancy, and fantastical costumes. See them all in action when Season 2 premieres Sept. 25 at 8 p.m. ET.