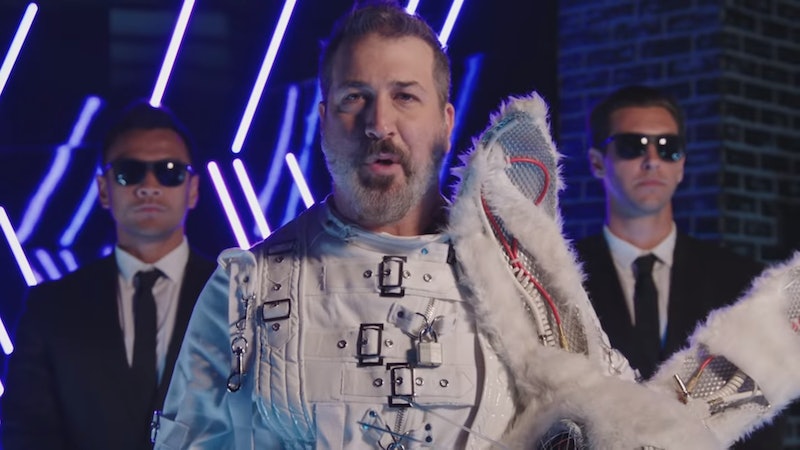 The Rabbit has been revealed, but at least one of Joey Fatone's *NSYNC bandmates realized he was on The Masked Singer long before his unmasking. In a new interview with People, the former boy band member shared that his fellow *NSYNC singer, Lance Bass, figured out he was the Rabbit when the second episode aired. That just goes to show that these '90s pop star pals are still close after all these years, even when one of them is trying to hide his identity for a wacky new TV show.

Bass wasn't the only boy band favorite who was convinced that Fatone was on The Masked Singer. The now unmasked Rabbit revealed to People that 98 Degrees singer Nick Lachey was pretty certain that his friend was under that mask, even though Fatone wouldn't confirm anything. He told the publication, "I didn't tell Nick specifically I was on it. He kind of asked me and I brushed him off until now. Lance [Bass] talked about it and I just kind of kept it quiet a little bit. But the minute the second episode aired he goes, 'Dude, I know it's you.' They know exactly my voice, my tone and everything. So then last night Lance texts me like, 'Yay! I can finally tell people now. I don't have to shut my mouth anymore.' It was funny!"

Fatone didn't mention any of the other *NSYNC guys figuring out his Rabbit status, but he did have some advice for J.C. Chasez, who some suspected was the Rabbit before the big reveal. If The Masked Singer comes calling for a second member of the band, he thinks his friend should do it.

"Of course I would!" Fatone told People when asked if he would encourage Chasez (or any of his other band mates) to join Season 2. "I doubt they would do it. Who knows? Maybe they're too good for that, I don't know. But for me, I like to do what's fun and exciting and entertaining. At that time, I wasn't promoting anything. It was just a lot of fun."

Having another member of *NSYNC on the show in Season 2 might be too obvious for the Fox hit. Given the lengths the show goes to in order to keep the contestants' identities under wraps, it would be surprising if they returned to the *NSYNC well so soon. But there are plenty of other boy band members who could pop up on the show. Given how convinced Lachey was that his friend was the Rabbit, he could be a great choice for a contestant or guest judge.

After Fatone was unmasked, Lachey tweeted to him, "This whole time!! How could you not tell me!?" Fatone replied, "Sorry I had too plus they specifically told me .....don't tell Nick Lachey." A quick glance at his Twitter feed reveals that the 98 Degrees singer has been dealing with major Rabbit suspicion from fans for weeks now. That probably makes his pal's secret keeping skills all the more frustrating.

While some fans may have gotten their boy band voices confused, it's nice to know that Fatone's brothers in boy band arms knew he was the Rabbit right from the start.

More like this
Netflix Reveals First Look At Wednesday In The 'Addams Family' Spinoff Series
By Bustle Editors
A New 'And Just Like That' Table Read Pic Confirms A Key Character's Return
By Jack Irvin and Grace Wehniainen
How To Stream 'Pretty Wild'
By Arya Roshanian
20 Years Later, Kelly Clarkson & 'American Idol' Judges Reunite For Her Hollywood Walk Of Fame Star
By Radhika Menon
Get Even More From Bustle — Sign Up For The Newsletter