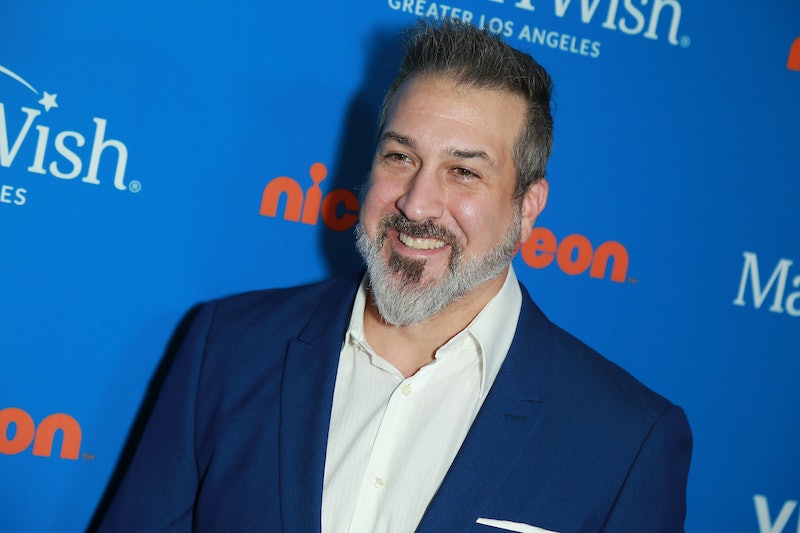 The Masked Singer said bye, bye, bye to the Rabbit last night. And this I promise you, it is tearin' up my heart. But do you know what has the opposite effect on my heart? Joey Fatone's behind-the-scenes photo from The Masked Singer. The artist formerly known as the Rabbit's time on the singing competition series has come to an end, but his time sharing fantastic The Masked Singer content has only begun.

Right after Wednesday’s episode of The Masked Singer aired, Fatone posted a picture someone took while he and his longtime manager Joe Mulvihill were walking around at a taping of the reality series. Their faces are covered, but the Rabbit's buckles and boots and whatnot are totally visible. “Just to give you a behind the scenes look at what I had to do and so did anyone who came with me!” wrote the *NSYNCer.

The Rabbit’s identity has been unveiled, and the human behind the glowing bunny eyes is free to talk all about his experience on the show. And what do you know, he and Mulvihill have a brand new podcast where they do just that. Shortly after the Rabbit was unmasked on national television, the first episode of Two Cups of Joe appeared and gave me The Masked Singer BTS content I crave.

In the ep, Fatone explained what it was like singing on this particular show (yes, they really sang live), admitted he felt bad for telling reporters over and over again that he was not the Rabbit when he was definitely the Rabbit, and offered up some fun facts about the costume itself. The former boy bander revealed that those glowing red eyes on the Rabbit mask were his idea, and also shared that the buckles on the coat were “legitimately locks.” “I was padlocked into the actual jacket,” Fatone said. “So god forbid I had to get out of that jacket, I could not get out of it.” He kept a spare pair of keys to the padlocks in his pocket just in case production lost their copies. Dare we say, he was not going to get *NSTUCK.

Fatone and Mulvihill also got into just how serious the show is about keeping the contestants’ identities under wraps from not just the audience at home, but the judges, host Nick Cannon, the director, the crew, and the dancers. On the first day of rehearsal, a P.A. handed Fatone some accessories the second he entered the studio gates. Fatone said,

“Your P.A. had a sweater and a mask and a robe and all of this other stuff, and they’re like, ‘Put this on.' And I’m like, ‘What are we doing?’ And they’re like, ‘Nobody’s supposed to know.’ So there is nobody there, so they put on this mirrored visor and the sweaters that say ‘Don’t talk to me.’ That was the first day we ever went in.”

The contestants weren't the only people milling about the studio lot in masks. As The Masked Singer executive producer Craig Plesits told The Hollywood Reporter earlier this year, "If [the contestants] were accompanied by a manager or a loved one, those individuals had to wear cloaks because, as we know very well in this town, if a big celebrity came and their manager or agent came, it's kind of easy to figure out who it is." You spot one member of a celebrity's team, and bam, the cat's out of the bag.

And so, when Mulvihill visited Fatone on set, he more or less ended up in a G-rated version of Eyes Wide Shut. Mulviill recalled,

“So I come to the second taping and they tell me to meet him at a 7-Eleven down the street and I’m like, ‘Huh?’ So I get in the car and [the P.A.] goes ‘Hi, Joe.’ And I say, ‘Hi, what’s up?’ And she goes, ‘Throw this on.’ It was a purple robe and it was a mask. And I put it on and I get out of the car and everybody, not representatives, but publicity people and everybody who worked for any of the acts that were on the air, they all had a mask and robe.”

All of this sounds amazing. I hope Fox releases hours and hours of behind-the-scenes footage.