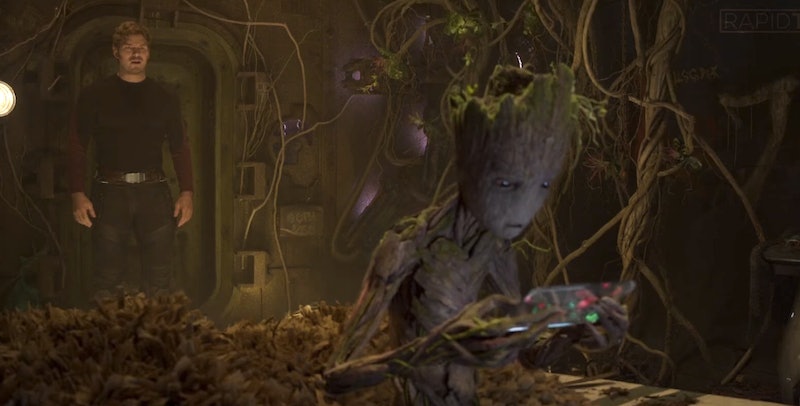 Spoilers ahead. As if the ending to Infinity War weren't sad enough on its own, new behind-the-scenes info has recently come out to re-open the wound for everyone. James Gunn, the creator of Guardians of the Galaxy just told fans on Twitter what the meaning of Groot's final line in Infinity War was, and — are you sitting down? — it was "Dad." As you can imagine, Twitter users were quick to reprimand Gunn for ruining their perfectly good Sunday nights with such heartbreaking news. Gunn responded to the criticism by saying, "I’m sorry! He asked! It’s in the script!"

Groot's tragic death — one of many at the hands of Thanos following an epic battle involving almost every Avenger and their allies in Wakanda — happened right next to Rocket. While Rocket and the audience heard Groot say his repeated line "I am Groot," the angsty teen actually had meant to call out to his raccoon friend, and apparent father figure. And you thought that Peter Parker dying in Tony Stark's arms was sad, not only does Gunn's tweet confirm that Groot thinks of Rocket as his dad, but it makes the angsty teen's early death all the more heartbreaking. This might be one MCU script secret that was better off unknown.

This isn't the first time Gunn used Twitter to crush people's souls while explaining what happens to Groot. After Guardians of the Galaxy featured Groot's death and Guardians 2 introduced fans to Baby Groot, Gunn took it upon himself to clarify to fans that Baby Groot was not, in fact, a reincarnation of the original Groot. Last February, Gunn tweeted,

"The internet is like Groundhog Day every time I point out first Groot died. Baby Groot has a different personality, a different body, no memories of adult Groot & adult Groot’s sacrifice actually meant something. New round of news stories & collective gasping again & again."

When Guardians fans questioned Gunn's clarification, the director/writer said, "It may not be obvious but it is 100% clearly in Vol. 2 for anyone paying attention," Nerdist reported. After fans continued to point out that Baby Groot resembled the first Guardians tree-alien, Gunn again wrote on Twitter, "Well... when it comes to talking trees the difference between clone and son is minimal." Then Gunn tweeted, "First Groot is dead. Baby Groot is his son."

All of this is to say that the teenage Groot in Infinity War was the original Groot's son, and the former thought of the latter's best friend as his father. It's kind of confusing if you think too much about the original Groot's position in this, but the bottom line is that Rocket played such an important role in both Groot and Baby Groot's lives, and the fact that the young Groot in Infinity War called him "Dad" is enough to make you need to call in sick to work in order to recover from the heartbreak.

People on Twitter reacted with as much angst and emotion as you might be feeling right now, so take heart in the fact that you are not alone.

If you think about it, Infinity War had a few instances of sad dad moments. First, Thanos sacrificed Gamora, his adopted daughter to get the Soul Stone. And as mentioned before, Peter Parker died in Tony Stark's arms, which resembles another father-son, or at least mentor-son relationship. Maybe the unreleased title to the fourth Avengers movie will be something like, "Avengers: It's Up to Dad." (Probably not, though.)

Watching some of your favorite MCU characters evaporate before your eyes at the end of Infinity War was probably sad enough to put you in a funk. Now, with this new info about Groot's death — now that you know how much he really loved Rocket — the rest of the year should probably just be canceled.

More like this
Letitia Wright's Aisha Encourages A Vital Conversation Around Immigration
By Maxine Harrison
Idris Elba & Tom Hollander Lead This Year’s Must-Watch Christmas Flick
By Maxine Harrison
You Definitely Know The Voice Of Shuri's AI In 'Black Panther: Wakanda Forever'
By Brad Witter
This James Bond Event At Abbey Road Studios Was A 007 Fan's Dream
By Samantha Rollins
Get Even More From Bustle — Sign Up For The Newsletter