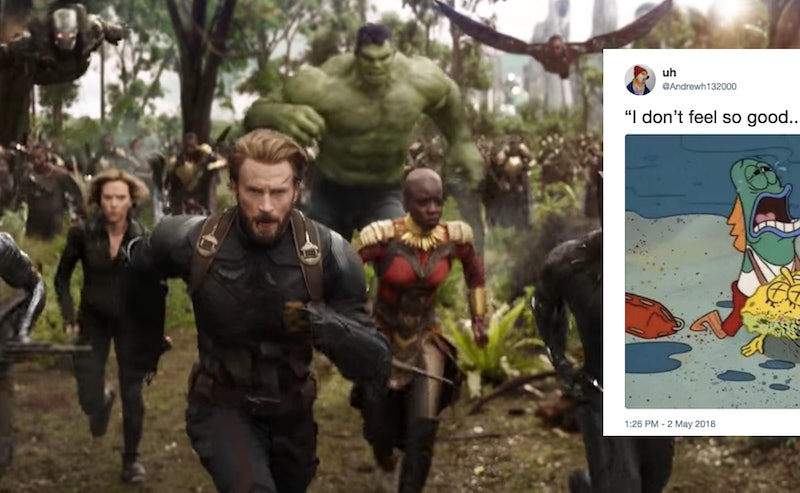 Spoilers ahead for Marvel's latest movie. While Avengers: Infinity War dominates the box office, memes inspired by the movie continue to dominate the Twittersphere, turning one of the film's saddest scenes into viral content. As BuzzFeed reported, there's a new Infinity War meme circulating that will make you laugh — if it doesn't make you cry first.

Fans who have seen the film will remember the heartbreaking scene when Thanos (played by Josh Brolin) snaps his fingers after collecting all the Infinity Stones, and half of the universe, including Spider-Man (played by Tom Holland), eventually disintegrates. Spider-Man tells Robert Downey Jr.'s Iron Man, "Mr. Stark, I don't feel so good," and embraces him, just before he disappears. Perhaps for fun (and also perhaps as a coping mechanism), people on the internet have taken those words and gotten creative with with them, tweeting that caption alongside photos of characters and people from different shows, movies, and other entirely unrelated contexts.

The film — which just had the highest opening weekend ever, making $250 million domestically and $380 million overseas for a combined record-breaking total of $630 million worldwide, according to The Hollywood Reporter — was the focus of great anticipation in the lead-up to its release. Other cast members include Chris Evans as Captain America, Scarlett Johansson's Black Widow, Mark Ruffalo as the Hulk, Robert Downey Jr. as Iron Man, Chadwick Boseman's Black Panther, Chris Hemsworth as Thor, Chris Pratt's Star-Lord, and Benedict Cumberbatch's Doctor Strange, and the movie has been the subject of numerous memes.

For some fans, the "I don't feel so good" posts provide catharsis and entertainment, but for others they are a complicated emotional experience. As @floofyparker wrote,

"y’ALL BETTA STOP WITH THE 'i don’t feel so good' MEME OR IM GONNA SUE ALL O YALL FOR EMOTIONAL DAMAGE HOW DO YOU WANT TO LAUGH AND SOB AT A TWEET AT THE SAME TIME."

Another fan @LCBebop tweeted, "OH MY GOD I TRIED TO MAKE A 'I DON’T FEEL SO GOOD” MEME AND I ALMOST CRIED,' along with an original meme of a pixelated Tails from Sonic the Hedgehog.

Below you'll find a few of the funniest and most heartbreaking takes on this latest round.

Will did not move to Bel-Air all the way from West Philadelphia for the show to end like this.

Harry and He Who Must Not Be Named were using wands and not Infinity Stones, but the similarity is striking.

Let's be honest, this is every bit as heartbreaking as Spider-Man's death. Spencer was an integral part of iCarly and the fans would not have stood for this.

The Force Was Not With You

And there goes the innoncence of childhood.

And then there were four.

When you suddenly remember the part of the syllabus that read, "The final exam will count for 30 percent of your your overall grade."

The Circle of Life

This might be the most glamorous goodbye of all.

While there is no doubt that Spider-Man's death in Infinity War was heartbreaking, fans can rest assured that his story is far from over. Holland will appear in Spiderman: Homecoming 2, due out in July 2019, according to Digital Spy. The film will pick up minutes after the Infinity War sequel, which will be released in May 2019. Fans will have to wait to see how things unfold for his character, but in the meantime, these memes might provide some comic relief.