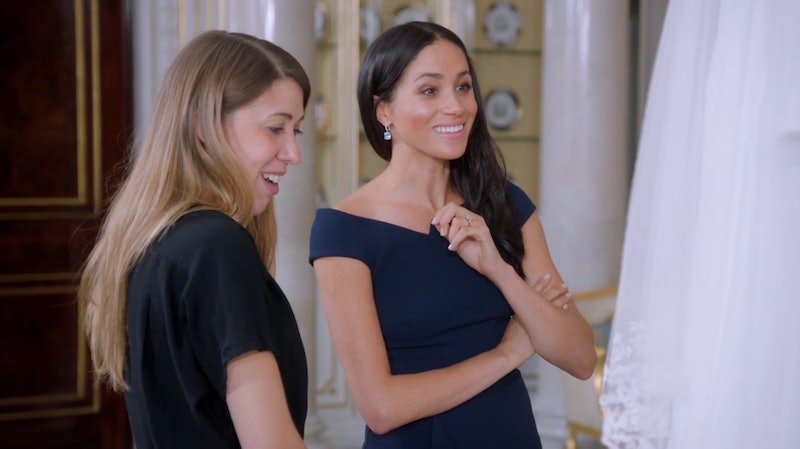 There's no question that Meghan Markle's wedding to Prince Harry earlier this year marked a new era for the British monarchy. Much has been written about how the addition of a biracial, divorced, American actor to the royal family symbolizes a more inclusive generation of royals. Markle, now referred to as the Duchess of Sussex, seems to have embraced that role head on. As the major face of the new documentary, Queen of the World, which airs Oct. 1 on HBO, Markle's importance in the world, not just within England, becomes all the more evident. One sequence in particular, in which Markle is reunited with her wedding dress, shows just how important she is as a symbol for diversity and proves that the monarchy is trying to move beyond its colonialist past.

Queen of the World explores Queen Elizabeth's role as the figure head of the British Commonwealth of Nations, a union of 53 nations, most of which are former colonies of England. But despite its title, the doc's most prominent face, and the member of the royal family who seemingly devotes the most time to the film is that of its newest. Markle's prominence in the film is an interesting choice, considering the subject matter (the Queen herself doesn't sit down for an interview for the doc, but then again she almost never does). But Markle's importance, it seems, is already evident to the young people of the Commonwealth. "Meghan Markle is the daughter of a black woman, and she's entered the royal family. That gives me pride," says Benjamin Fraser, a member of the Caribbean Scholarship program. "She is going to be a symbol of hope to women all across the Commonwealth and I'm inspired. It means there's serious movement in this country."

The scene that emphasizes this multicultural embrace the most is when Markle revisits her wedding dress before it joins an exhibit. Her wedding veil features embroidered flowers representing all 53 nations around the world that are a part of the British Commonwealth. "With Harry's role as youth ambassador for the Commonwealth, it was so important to us to have the spirit of inclusivity at our wedding," Markle says in the doc about the choice to include the floral detail. As she runs her fingers over each flower, examining the intricate stitches of the embroidery, you can sense that her role comes with great responsibility, as well as a great opportunity to bring a sense of diversity to a monarchy with a problematic history.

Indeed, the documentary shows this by moving beyond the royal family and highlighting young people from all over the world whom are being recognized for their achievements. Designer Euphemia-Ann Sydney-Davies, a refugee from Sierra Leone, is honored at a fashion event in Buckingham Palace. Elizabeth Kite of Tonga is one of a few recipients of the Queen's Young Leadership Award. Prince Charles travels to India to visit school children, and the film captures moments from the Commonwealth Summit, an event where all of the leaders of Commonwealth countries have meetings with members of the royal family.

If the documentary's goal is to take the focus off the Queen and put it on her subjects, it works. While at first it seems strange that the film doesn't focus much on Elizabeth II herself, it's much more interesting to see how widespread her (and Markle's) influence actually is.

But the big question is, will it work? Can Britain shed its historically stuffy, white image by moving beyond its colonialist past and embracing the diversity of its citizenry? Not everyone was thrilled with Markle's veil and its symbolism. Aparna Kapadia, a historian of South Asia at Williams College wrote that the choice to include floral representatives of former British colonies reminded Indians of a painful and bloody time in their history. Additionally, Prince Harry may be incredibly charming, but even he slip up. In the doc, his encounter with some of the participants of the Caribbean Scholarship program gets a little cringe-worthy when he asks if they've been given nice rooms. "They've not all got you bunked into one room?" he asks, awkwardly making conversation, reminding us that he's an incredibly wealthy white man with a ton of power, speaking to another class.

But the royals will never be without their criticism. The more important matter will be if Markle's addition to the family indeed does inspire the monarchy to move into a more progressive, 21st-century ideology with all of the inclusive representation that that requires. As Queen of the World points out, the Commonwealth itself isn't lacking in diversity, but including a place at the table for its members means more invitations have to be sent out.

More like this
An Extremely Messy Ranking Of What Actually Happens In 'Don't Worry Darling'
By Chloe Foussianes
Paul Mescal, Man Of Mystery
By Samantha Leach and Heather Hazzan
Twitter Is Unravelling Over Wolverine’s Return For 'Deadpool 3'
By Darshita Goyal
Florence Pugh Reflected On Her ‘Don’t Worry Darling’ Experience On Opening Day
By Brad Witter
Get Even More From Bustle — Sign Up For The Newsletter