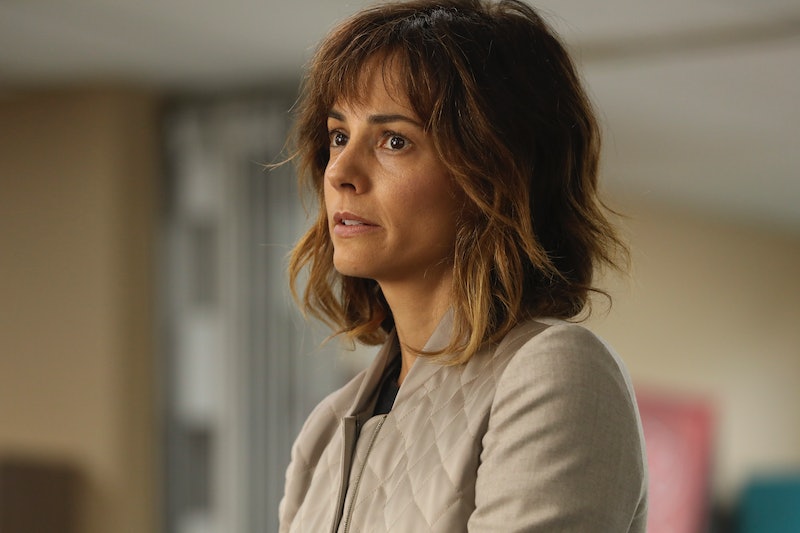 From the moment Delilah revealed her very unexpected pregnancy on A Million Little Things, one had to wonder if she would keep the baby. If the baby was her husband Jon’s, well, he died in a tragic suicide and that child would be a constant reminder of his death. If the baby was her lover Eddie’s, well, Eddie was one of Jon’s closest friends and it would be a huge debacle. Delilah’s pregnancy is a turning point for her character, but Delilah’s abortion story on A Million Little Things shows just how far our culture has come — and how far it needs to go — when it comes to discussing abortion on television.

Delilah is still grieving and reeling from her husband’s death, so it’s an understatement to say that she’s thrown for a loop when she finds she’s pregnant. Jon will not live on this baby, she says to her friends , because Jon is dead. And also because the baby isn’t his — it's Eddie's. She very understandably does not want to continue with this much upheaval in her and her kid’s lives, and so she schedules an abortion and has Gary take her. Delilah’s abortion scene shows her nearly weeping on a surgical table, and, in the end, she doesn’t complete the procedure.

This makes sense for plot development on A Million Little Things, but the consequences surrounding her abortion do a disservice to those watching on television. To start, Delilah, in her vulnerable state, opted out of her abortion, but that’s not always the case. Some women decide to not terminate their pregnancy at the very last minute, like viewers so often see on television, but, according to Reuters, more than 95 percent of women who do have an abortion don't regret it and report that it was the right decision for them at the time.

Decision-making notwithstanding, the portrayal of Delilah’s abortion is misleading. She is on an operating table, alone, quietly crying, her legs already spread up into stirrups. That’s traumatizing, and it could lead other women to think that’s what their experience would be like, too, should they need or want an abortion.

We don’t know exactly how far along in her pregnancy Delilah is, but she is suffering from some nausea and vomiting — classic morning sickness. According to the Cleveland Clinic, morning sickness can start around six weeks of pregnancy and last until about the 12th week. This means that Delilah’s pregnancy is still in the very, very early stages — early enough that she probably would not have needed an in-clinic abortion. According to Planned Parenthood, pregnancies up to ten weeks can be terminated by a combination of mifepristone and misoprostol, more commonly known as a medical abortion. Taking these two medications at home causes the patient to have what’s akin to a “really heavy, crampy period, and the process is very similar to an early miscarriage," according to Planned Parenthood. Most abortions done in the U.S. are done during the first trimester, according to the Guttmacher Institute, and many doctors even advocate for telemedication abortion, where 99 percent of telemedicine patients had a successful abortion, as per research done by Advancing New Standards in Reproductive Health (ANSIRH).

While taking the abortion pill is still having an abortion, it is a much simpler process. Both women and men need to know about all of the options when it comes to family family, and this tearful, solo experience on an operating table isn't what happens to most women who have abortions. There wasn't even a nurse there. This misrepresentation of what an abortions really look like is dangerous for abortion rights, as it change peoples' perceptions about the procedure itself and why a woman might need or choose to have an abortion. This is backed up by some very insightful recent research.

According to the Washington Post, San Francisco sociologists Gretchen Sisson and Katrina Kimport analyzed how women on television and in film have abortions, and the results skew toward just that — the fictional. They found that of 78 abortion storylines from 2005 to 2014, about half of the women in question completed the procedure. Most were white and upper-to-middle-class. They were also in committed relationships. This doesn’t reflect real-life, as about a third of women who have abortions are African-American, and 40 percent of women who choose to have an abortion are at the poverty level.

The real-life versus fictional reasons for having an abortion are commonly different, too. According to Sisson and Kimport, fictional characters tend to use the reason of wanting to continue their career and lives as they are as the main reason for terminating a pregnancy. While that can often be the case for some, this also leads to a perception that abortion is about some capricious want rather than a need, whether it be medical, economic, or something else. But wanting an abortion is also a woman's constitutional right.

With abortion rights under siege in America, it is continuously groundbreaking that movies and television shows show women thinking about and deciding on abortions and their own family planning. It was good to see Delilah's decision making process play out on a Million Little Things. In the end, Delilah did what was best for her family (and for the driving plot of the show), but Hollywood in general could do more to incorporate the real-life demographics, reasons, and actual abortion options into their scripts. It’s imperative for women to know their options and their rights and not be afraid to explore them.