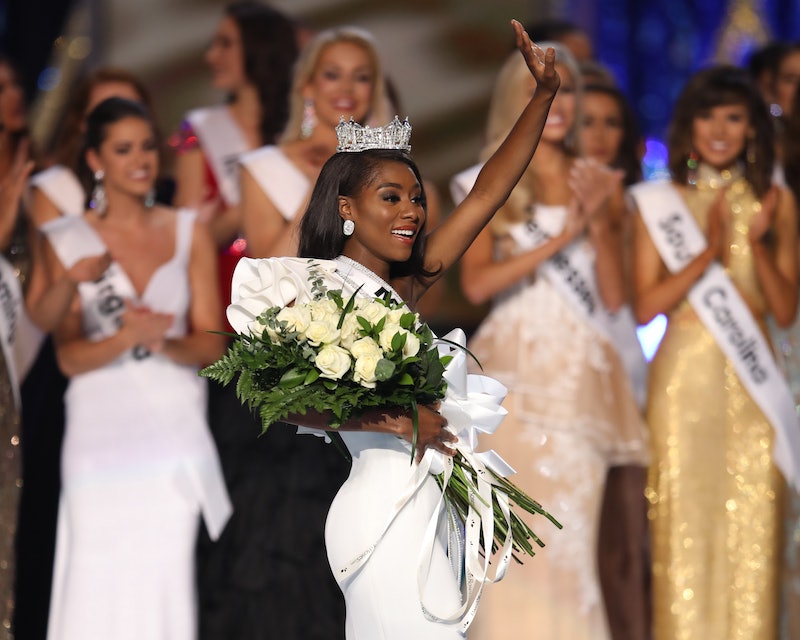 The current Miss America, Nia Franklin, will relinquish her crown to a lucky new winner during this year's competition broadcast on Thursday, Dec. 19. Kit Hoover and Mario Lopez will host the two-hour NBC competition, while Karamo Brown, Superstore actor Lauren Ash, and Kelly Rowland will serve as judges. And while it sounds like an entertaining evening, the jury's still out on how much Miss America 2020 will win.

That said, it's unclear whether the winners will receive the same amount this year or not. The Miss America Foundation's site was broken at the time of publishing; however, Bustle reached out to the organization but did receive an immediate response.

Whatever the exact numbers are, it's clear that scholarships are a huge incentive for the Miss America contestants. In an interview with the radio show Sway in the Morning, Franklin said that she was drawn to the pageantry circuit because of their extensive scholarships, which she was looking for to fund her graduate education at the University of North Carolina School of the Arts. "So between [hoping to make friends] and wanting to help put myself through my Master's degree, I decided to try and get some scholarships from the Miss America scholarship organization," Franklin said. "It's actually the largest provider of scholarships to women." And thankfully she did.

Franklin is not alone in her motivations, either. Victoria Hill (Miss Georgia) told Miss America 2013, Mallory Hagan, that she became involved with the organization two years ago when she learned about the scholarship opportunities. "I paid for my bachelor's, and I'm now saving up for my Master's," Hill said.

The reigning Miss Georgia continued, saying that she has won over $42,000 in scholarships through the Miss America Organization. At the time of her interview, Hill had just won the Talent Portion at Preliminary Night 1 and consequently received a $2,000 scholarship, which was calculated into her estimated $42,000, and $1,000 during Preliminary Night 2, which wasn't.

So while this year's scholarship amount is still undetermined, audiences can rest assured that the money is going to a deserved cause.

More like this
'Love Island' Has Added Yet Another Bombshell To The Villa
By Bustle UK
This 'Bachelor' Contestant Had The Best Reaction To Wearing The Same Dress As Another Woman
By Grace Wehniainen
'Bachelorette' Vet Clare Crawley Unveiled 2 Special Wedding Day Accessories
By Stephanie Topacio Long
Erika Jayne's Estranged Husband Tom Girardi Has Been Indicted On Fraud Charges
By Jake Viswanath
Get Even More From Bustle — Sign Up For The Newsletter
From hair trends to relationship advice, our daily newsletter has everything you need to sound like a person who’s on TikTok, even if you aren’t.