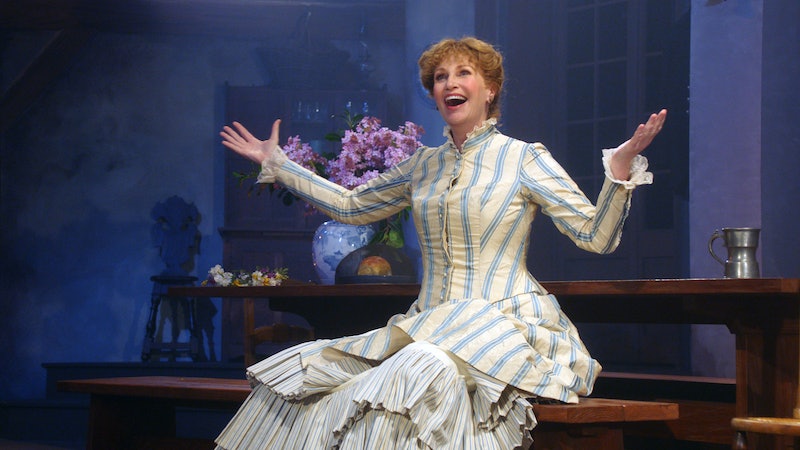 Light spoilers ahead for The Marvelous Mrs. Maisel Season 3. One of the more amusing twists in The Marvelous Mrs. Maisel Season 3 is that Midge Maisel's sworn enemy, the arrogant and affluent Sophie Lennon, is now also being managed by Susie Myerson. Susie and Sophie's relationship is understandably rocky in the beginning, and it's tested early on by Sophie's pie in the sky ask: she wants to transition from being a comedy caricature to a serious stage actor, beginning with a role in a play called Miss Julie.

From the get-go, Harry Drake, Sophie's prior manager (who still owns essentially all of her intellectual property) warns Susie about "Strindberg," a message that confuses her until she's called to Sophie's house to talk career goals. Susie quickly learns that "Strindberg" means Swedish playwright August Strindberg, and Sophie is set on performing one of his more famous plays, Miss Julie. Miss Julie is a naturalistic play, meaning it mainly takes place within a single location (the manor's kitchen) and is a restrained, simple study of human circumstances and psychology. The story explores the simmering tension between the selfish and aristocratic Miss Julie, her valet Jean, and his servant fiancée Christine as Miss Julie crosses lines and lures Jean into an illicit and volatile relationship.

Sophie naturally imagines herself as Miss Julie, who delights in alternating between flirting with and lording over Jean, and who generally shocks everyone with her brazen, inappropriate behavior. (She attends a barn dance and dances with the servants and commoners, but also derides them as being beneath her.) Susie bends over backwards to get the play's production rolling for Sophie, and even manages to book a top director and Broadway star Gavin Hawk (The Princess Bride's Cary Elwes, who Sophie bemoans she's not sure she can be attracted to because he might not have a "nice firm butt.")

Really, everything for the show lines up perfectly thanks to Susie, but when it comes time for rehearsals, Sophie calls them an "unmitigated disaster." She hates being ordered around by the director, feels Gavin does not worship her enough, and forgets Moira, the actor who's playing Christine, is even in the play.

This amusingly all mirrors Miss Julie herself: she hates following rules, disregards that Jean is engaged, ignores Christine's presence, and continuously trades scathing barbs with Jean so she can have his attention all to herself. She's an upper class woman revolted by the lower class, and yet at the same time she desires Jean and "the fall" from her position.

It's a joke within itself that Sophie has her heart set on staging Miss Julie because it's a play that requires a ton of cooperation between the actors — and Sophie, like Miss Julie, notoriously doesn't know how to share or play fair. As Gavin points out, there are literally only three characters in Miss Julie, and so chemistry and working together are key for the entire thing to work. (Compare this to the works of Shakespeare, for example, where characters are often left on stage alone so they can deliver a soliloquy.) Sophie may be exactly like Miss Julie in real life, but she's actually pretty terrible at pretending to be Miss Julie.

When the director tells Sophie to "play tennis," for example, he's not just trying to frustrate her with a sports metaphor. (Though really, he could explain himself a little better!) He's referring to how the entire play is like a verbal duel between Miss Julie, Jean, and Christine. Sophie is acting like she's the only one on the stage, which doesn't work when she needs to be reacting off of and feeding into Gavin's delivery. The audience is supposed to feel the slowly coiling tension between the two, not that Sophie is trying to break away and monologue on her own.

All in all, Susie has her work cut out for her with Miss Julie. As Midge grows in her own career, so too does Sophie have a chance to do something outside her comfort zone; now, she just needs to swallow her pride and get out of her own way.

More like this
The Plane Crash In 'Dear Edward' Is Based On A 2010 Tragedy
By Grace Wehniainen
Keyla Monterroso Mejia Is Finally The Star Of The Show
By Gabrielle Bondi
This 'One Tree Hill' Wardrobe Error Is Going Viral On TikTok
By Brad Witter
A 'Terminal List' Sequel & Spinoff Are Reportedly In The Works
By Kadin Burnett and Grace Wehniainen
Get Even More From Bustle — Sign Up For The Newsletter
From hair trends to relationship advice, our daily newsletter has everything you need to sound like a person who’s on TikTok, even if you aren’t.