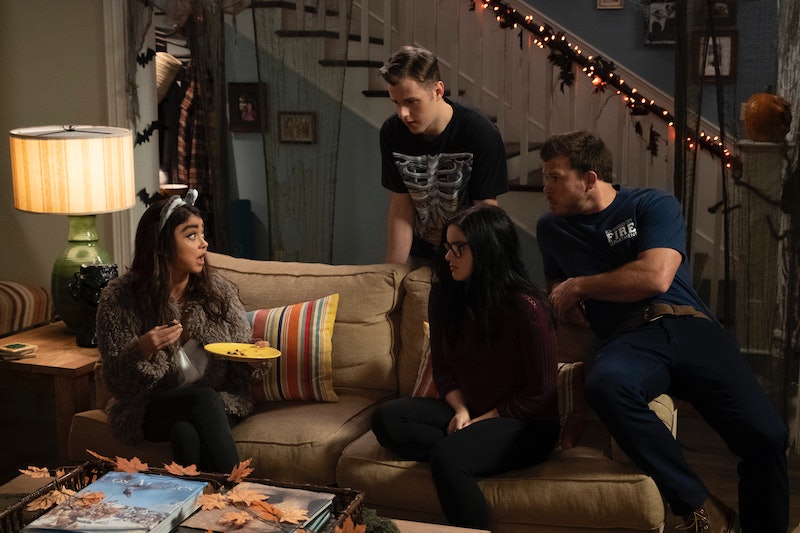 Modern Family is full of plot twists this season, but it's latest wasn't one for its star. Spoilers for "Did the Chicken Cross the Road?" ahead. While fans might have been shocked by the Modern Family pregnancy reveal which came only episodes after DeDe Pritchard died, Sarah Hyland definitely wasn't. And honestly, there's a case to be made that Hyland's Instagram followers shouldn't have been all that surprised either when they found out Haley Dunphy is pregnant.

On Tuesday's (Nov. 8) episode, it was revealed that Haley is pregnant after she had to go to the emergency room after an interesting bumper cars incident with her old new boyfriend Dylan (Reid Ewing). See, while bumpering she accidentally got her lipstick stuck up her nose, which is so very Haley. And the lipstick situation was so bad, it sent her right to the ER. No surprise, when Haley was told she was pregnant she was definitely in shock.

On her Instagram Stories, though, Hyland admitted she's actually been keeping Haley's bump under wraps for months. She told fans she knew about the twist "before the season started" but she was given "zero information on details."

But, maybe if fans had read into some of her recent Insta posts, it wouldn't have been a surprise for them either. Hours before the episode aired, Hyland teased the reveal with a photo of her in a bumper car, "Buckle up for tonight’s brand new episode of @abcmodernfam guys. It’s gonna be a BUMPY ride!" Get it?

Not to mention, Hyland also hinted that there were more big reveals beyond the death of Haley's grandma to come from Modern Family Season 10. Last week, after the Halloween episode aired and revealed Dede's passing, she told The Hollywood Reporter that something was going to happen that was “bigger thing than the death.” She added that "there's a lot happening with Haley, but I can't say." Clearly, a baby would be a pretty big thing.

Fans had already guessed that Haley might be pregnant based on some clues in the Halloween episode, like how she was eating the whole time and talking about using eucalyptus as birth control, perhaps a suggestion from her deal ol' grandma. But, it wasn't until the latest episode that the theories were confirmed.

"Well I guess the cat's outta the bag!!!" Hyland captioned a photo of her wearing a fake pregnancy belly shared to Instagram after the episode aired. "Or more like the bump's outta the shirt!..... that was a horrible joke. I apologize." No apologies necessary for a good pun.

The drama of Haley's pregnancy will no doubt loom over the rest of the season, as the show hasn't yet confirmed who the father of the baby is. While it's clear Dylan thinks it's him, Haley started dating him quite recently. In fact, they didn't pick back up until right after she officially broke things off with her astrophysics professor beau Arwin (You're The Worst's Chris Geere), so it's quite possible that Arwin could be the father.

As for what Hyland wants for Haley in what could be Modern Family's final season? She told The Hollywood Reporter last month that she'd like Haley to learn some responsibility. “I think it's about five years past her time," she said. Well, a baby is bound to teach her responsibility real quick. Getting to see Haley as a mom means the show has come full circle, not to mention, Modern Family still has a few tricks up its sleeve.