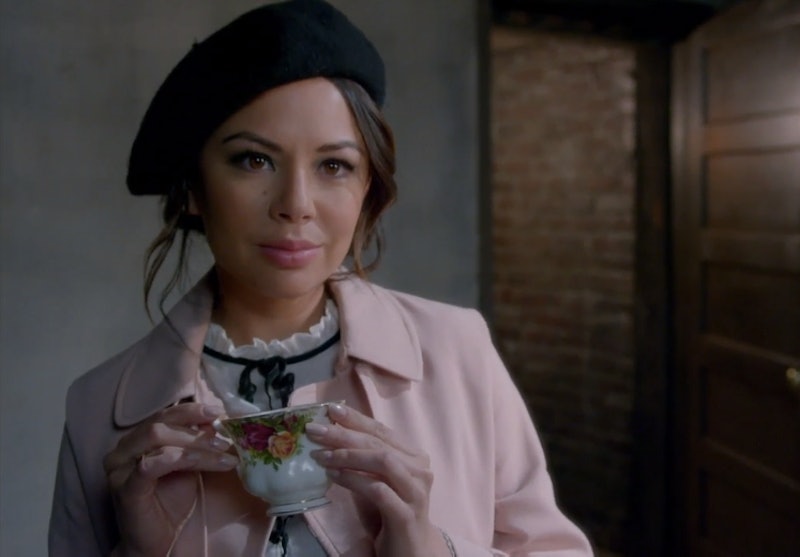 To say the Pretty Little Liars finale was shocking would be an understatement. Spoilers ahead for the Pretty Little Liars series finale. Not only was A.D.'s identity finally revealed, but Mona's finale reveal proves she was the best A of all. Just when you thought the episode was wrapped up, viewers see Mona working in a French doll shop, where she keeps a doll house in the basement. But no, it's not an ordinary doll house — it's a replica of a real house, holding Mary Drake and A.D. hostage.

But, before diving into Mona's ending, let's back up. Who is A.D. anyway? Alex Drake, aka Spencer's identical twin sister and Mary Drake's daughter. Alex was jealous of Spencer getting a better life, and thus, tried to take over it — even concealing her British accent to do so.

While Alex manages to capture Spencer and Ezra and hold them hostage, the rest of the Liars soon figure out what's going on. Thanks to Toby, Caleb, and yes, even Jenna, they go rescue Spencer. Mona's in on the rescue too, revealing that she as on the good side once and for all (well, sort of).

It looked like the cops showed up to take Alex away, yet here she and Mary are, living in Mona's Parisian fantasy. So, how did she get them there? Honestly, fans may never know the full story, but it sure looks like Mona's boyfriend (who kisses her in the doll shop) posed as a cop. From there, the Drakes must've been taken to the doll house.

While holding people hostage is never something to condone, the point is that Mona has been the show's genius all along — even if that means being an evil genius. She's one step ahead, using her brains to combat the other negative forces out there. And she ultimately got revenge on those who were making the Liars' lives miserable.

The fact that she one-upped A.D., who was supposed to be the ultimate villain, proves you don't want to mess with Mona — ever.