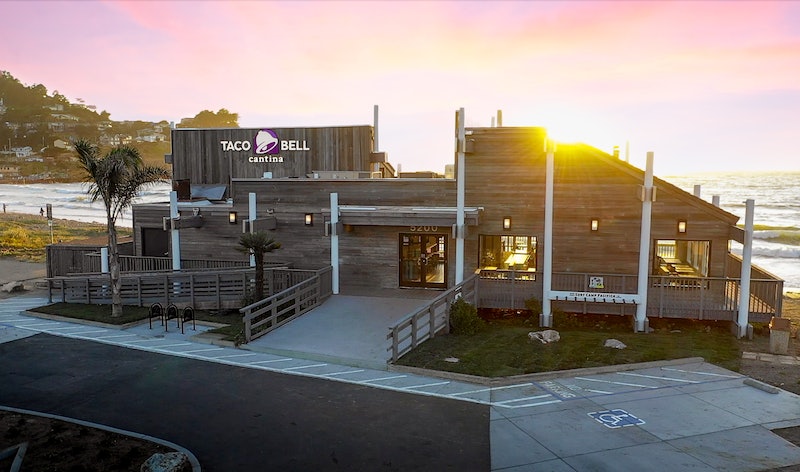 I’ll be honest: When I think “fast food joint,” I don’t typically think, “WOW, I CAN’T WAIT TO SEE WHAT IT LOOKS LIKE!” But, uh, folks? I stand corrected: The most beautiful Taco Bell locations in the United States actually are something to write home about. Besides being perhaps unexpectedly pretty, they’re also each quite unique — and very specific to the cities in which they’re based. Who would’ve thunk that Taco Bell would become a legit tourist destination?

Taco Bell’s history actually dates back further than most people probably think (although not as far back as, say, McDonald’s). The chain’s founder and namesake, Glen Bell, opened his first fast food joint in San Bernardino, Calif. in 1948 — but it wasn’t a Tex-Mex spot; it was a hot dog stand. He followed that venture up with a second burger and hot dog joint in 1950, and after befriending the owner of the taco restaurant across the street and learning how to make hard shell tacos, he opened a third spot called Taco-Tia. By the time the early 1960s rolled around, Bell had opened up a number of other taco spots — four of which were called El Taco — which he eventually sold to a business partner. It was at that point that he opened up the first Taco Bell in Downey, Calif., and, well… here we are.

In recent years, Taco Bell, which is now owned by Yum! Brands, has been boosting its portfolio somewhat; in addition to regular Taco Bells, of which there are around 7,000 worldwide, it now operates a handful of urban in-line spots and Taco Bell Cantinas. The Cantina concept, which opened up its first location in Chicago in 2015, includes not just the standard Taco Bell menu, but also things like a “shareables” menu and — perhaps most notably — alcohol in the form of beer, wine, and spiked Freezes.

The Cantinas tend to be the most unique restaurants of the bunch, so it’s no surprise that the prettiest Taco Bell locations are also generally Cantinas. Take, for example…

Located at 5200 Coast Highway in Pacifica, Calif., this Taco Bell has long been considered the most spectacular Taco Bell in existence — even before it was slated to become a Taco Bell Cantina. Articles such as this 2013 Thrillist piece can be found hailing it as “the greatest Taco Bell in the world,” even though the announcement that it would transform into a Cantina wouldn’t happen until last year. The renovations were carried out in 2019, and the results are nothing short of astonishing.

(Yes, I did just describe a Taco Bell as “astonishing.”)

Given that the Tex-Mex spot is situated right on the beach, it naturally features a walk-up window accessible from said beach; surfers, sunbathers, and other beach-goers can literally step right up and order their favorite Taco Bell fare with ease. There’s even “surfboard parking” outside. The interior is also brand new, complete with a mural by San Francisco street artist Nora Bruhn and an indoor/outdoor fireplace. Oh, and it’s one of the first Taco Bell Cantinas to have both recycling and compost bins on the premises. All in all, it looks like quite the experience.

The best part is that the building hasn’t always been a Taco Bell — but it’s always been notable. According to a 2018 history of the joint aptly titled “Chalupa in Paradise” by Peter Hartlaub published at the San Francisco Chronicle, the structure originally went up in the 1960s. It operated as an A&W burger place for around 10 years, but it’s had many identities over the years, being “passed down through generations” in the community, as Hartlaub put it. “Every resident seems to have worked there, or given birth to someone who worked there. At the very least, everyone has a good story to tell about it.”

It’s not totally clear when it became a Taco Bell — it likely happened sometime in the ‘80s — but by the 1990s, it had made its way into a national travel article as “one of the world’s most scenic fast food establishments." The rest, as they say, is... well, you know how it goes.

But not all scenic Taco Bell Cantinas are on the ocean; some of them — many of them, in fact — are in the city. Like…

Three new Taco Bell Cantinas opened in 2018: One at 224 7th Avenue, one at 500 8th Avenue, and this one at 840 8th Avenue (between 50th and 51th Streets, for those who navigate via the grid). All three of them boasted a specialty beer on the menu not too long after opening — a collaboration with New York brewery Blue Point, the Big City Bell Pilsner — as well as fancy-schmancy urban-inspired designs and super late hours. Want a taco at 4:30 in the morning? That can be arranged; the 840 8th Ave. spot is open from 7 a.m. to 5 a.m. every day. It may not quite be a 24-hour Taco Bell, but 22 hours is pretty close.

If, however, you’ll settle for nothing less than a Taco Bell that’s literally all day, every day, there’s always…

Of course Taco Bell’s flagship location is in Las Vegas; where else would it be? As then-Taco Bell Corp CEO Brian Niccol said in a press release when the restaurant was announced in 2016, “When we talked about where to establish a flagship store, it didn’t take long to realize that having a presence in the heart of Vegas would undoubtedly create a unique, distinctive, and fun destination and experience for Taco Bell fans.” And with an address located right on the Strip — 3717 South Las Vegas Boulevard — this Cantina is far and away the flashiest of the bunch.

What contributes to the glitter and glow of this spot? Maybe it’s the bright lights and original artwork. Maybe it’s the fact that it’s got two floors and a patio, ensuring not just plenty of seating, but plenty of stylish seating. Maybe it’s the open kitchen, which lets you see exactly how your beloved Crunchwrap gets made. Maybe it’s all of these things, and much more — the Freeze Wall, for example, which dispenses all the boozy Twisted Freezes you could ever want, the tablet menus and ordering system that are now standard at many Taco Bells, the giant merch shop, and on, and on, and on. Oh, and it’s open 24 hours a day, so you can burrito yourself up whenever you want.

Did I mention, by the way, that you can also get married at this Taco Bell if you want? Because you can. It’s in Vegas, so obviously there’s a wedding chapel onsite. The $600 package includes a half-hour ceremony with an ordained officiant, a private area for your reception with space for up to 25 of your favorite people, the use of a Taco Bell hot sauce packet bouquet, and tons of wedding-ready merch. Dream wedding, or dream wedding?

These three locations are, of course, far from the only notable Taco Bells in the United States; heck, there are even more bizarrely unique (or uniquely bizarre, depending on your point of view) Taco Bells not just across the country, but all over the world. If you’ve been thinking about planning a road trip, though, I can think of worse ideas than the plan your route according to the most interesting Bells throughout the land. Now, how much vacation time do you have left this year?