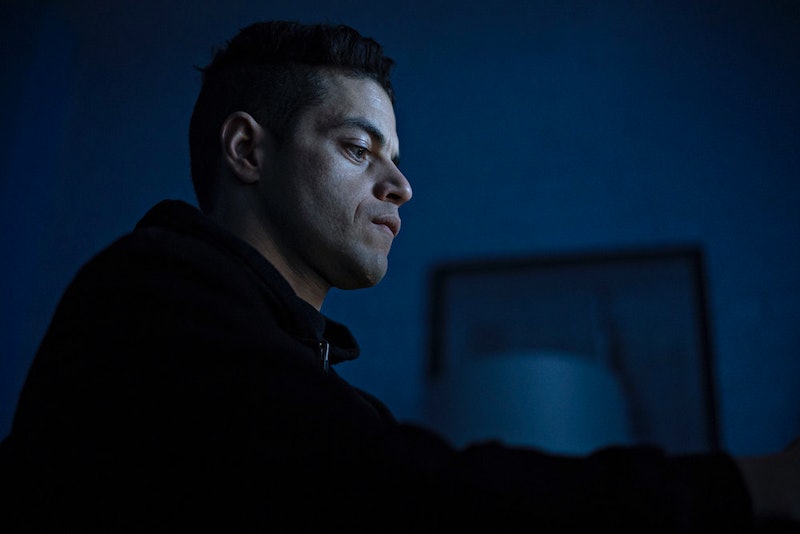 Spoilers ahead for the Mr. Robot series finale. Mr. Robot may have started with "Hello, friend," but the series finale ended with another greeting: Darlene uttering, "Hello, Elliot." With the reveal that the Elliot viewers have been following for the past four seasons hasn't been the real Elliot at all, the Mr. Robot series ending recontextualizes the entire show. Rami Malek's character has been an unreliable narrator from the beginning, but the final twist of Mr. Robot proves just how untrustworthy Elliot — well, the "mastermind" identity of Elliot — has been to the audience and to himself.

The first half of the two-part series finale follows Elliot as he seemingly navigates the world Whiterose's machine has created. With everyone in this alternate reality mistaking him for the other Elliot, our Elliot gets to experience love and support as his and Angela's families prepare for their wedding day.

During his meeting with Angela's very alive parents Phillip Price and Emily, Elliot fully realizes that an alternate reality also means an alternate version of himself. Once the two Elliots meet, the truth about this parallel universe — and the entire series — is revealed, making for an inevitable conclusion that exposed the real identity of Elliot Alderson. Let's break down all the big reveals.

Elliot Kills The Alternate Reality Version Of Himself

Elliot learns that the parallel universe Elliot daydreams of a hoodie-wearing hacker persona who leads a more exciting life. But our Elliot also has dreams, and he covets the normalcy and happiness that this Elliot knows. An earthquake caused by the two identities interacting leads to Elliot 2.0 suffering a head injury, which Elliot takes advantage of. Rather than call for help, Elliot murders his other self so that he can be the one who marries Angela the next day. Elliot pleads for his viewer friends not to judge him, but killing the other version of himself is dark even by Elliot's standards. He's not brought to justice, either, since he escapes the law when Dom (as an alternate reality NYPD officer) detects his crime.

The Alternate Reality Isn't Part Of Whiterose's Machine At All

Mr. Robot comes into the picture after the murder to provide Elliot with a reality check. Mr. Robot says that there was never going to be a wedding because this isn't actually some perfect alternate reality created by Whiterose and her mysterious machine. (In fact, the audience never learns the purpose of Whiterose's machine.) Instead, our Elliot evidently made this place as "a prison, a recursive loop that you constructed about a year ago to keep him occupied so you could take control," Mr. Robot says. Who did our Elliot take control from? "The real Elliot."

"The Other One" Is The Mastermind

To help him see the truth, Mr. Robot explains that this Elliot has been in the prison reality before. In a dream state while he was going through morphine withdrawal in the fourth episode of Mr. Robot, "eps1.3_da3m0ns.mp4," Angela and Elliot had met in the Fun Society arcade at Coney Island. The wedding-dress-wearing Angela told him, "You're not Elliot. You're the—." While her line was cut off then, Portia Doubleday returns in the finale to expose the truth about his identity, "You're not Elliot. You're the mastermind."

Krista Explains The Origins Of All Of Elliot's Identities

Despite Mr. Robot and Angela's efforts, the message that he's not the real Elliot doesn't get through until Krista gets involved. In the fake reality, Elliot's therapist outlines the many identities that exist due to Elliot's Dissociative Identity Disorder diagnosis. Mr. Robot was created to be his "protector" after Elliot jumped out of the window to escape his father's sexual abuse. The Mother is the "persecutor," which was Elliot's way of blaming himself for the abuse his father had perpetrated on him. His younger self is another personality "who emerged to handle the abuse [Elliot] couldn't tolerate." This family is joined by the audience, who are the "voyeurs."

Finally, Krista makes him face the truth that he's also an identity — a vigilante hacker full of anger and vengeance, who shielded Elliot and formed fsociety. "The personality that had gained so much control he forgot. He forgot he was only just another personality," she says. "Now it's time for you to give that control back to the host — the real Elliot."

Darlene Helps The Mastermind Confess In The Real World

The mastermind Elliot wakes up in the real world in the hospital with Darlene by his side. She tells him he destroyed Whiterose's machine and that Whiterose is dead, so he officially saved the world. He's moved to confess to Darlene that he's not the real Elliot. And while Krista had never figured out the truth about Elliot, Darlene admits that she knew all along that the Elliot she orchestrated the 5/9 hack with was not the brother she grew up with. Seeing how Darlene cares for Elliot makes the mastermind realize the fake world he created doesn't have everything the real Elliot needs because it doesn't have Darlene.

The Mastermind Gives Up Control And The Real Elliot Wakes Up

The mastermind joins the other personalities once he's ready to relinquish control and let the real Elliot wake up. But he reminds the audience it's not just him that needs to let go — the viewers need to part with the mastermind persona they've been following as well. The four personalities watch Elliot's life play out in a movie theater and the film projector morphs into the real Elliot's eye as he wakes up. While the mastermind's "friends" never see the real Elliot in action, Darlene instantly knows he's back and welcomes her brother with a, "Hello, Elliot."

Mr. Robot fans never really knew the real Elliot. But with the mastermind finally stepping back and letting Elliot Alderson's true self come forward, the voyeur friends he acquired over the show's four seasons can say goodbye knowing Elliot will always be looked after by his sister and his personalities.