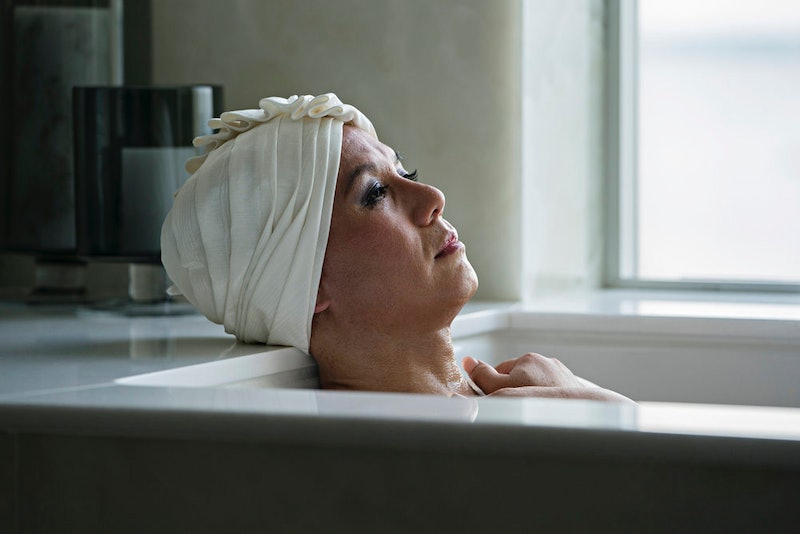 The violent events of the Mr. Robot Season 3 finale remind viewers that Whiterose is still the master manipulator. Major spoilers follow. From afar, she manages to turn Elliot, Darlene, and even FBI agent Dom to the Dark Army. In order to save Darlene's life, Elliot says he can move the Whiterose's project from Washington Township to the Congo. His superior hacker skills give Darlene and him their lives, but they have to sell their souls to the Dark Army in exchange. And while viewers still have no idea what her project is, it does seem that creator and showrunner Sam Esmail has set up Mr. Robot to go in a sci-fi direction in Season 4.

Perhaps it's more accurate to say that Esmail is the master manipulator rather than his character Whiterose. Because right when Angela finally starts to disbelieve what Whiterose told her back in Season 2, I start to genuinely think there must be some truth to it. It's still unclear why, butt seems safe to say that Angela thought Whiterose could change the past and bring back her mom, and her plan must have something to do with the machine that Whiterose wants to be moved from power plant to the recently annexed Congo. Some viewers think this machine from the Season 3 premiere could be a quantum computer or a particle accelerator, and the supernatural theories that she wants to change time or expose a parallel universe don't seem as out-there as they first did after the Season 3 finale.

But E Corp CEO Phillip Price thinks that Whiterose's project "stems from an obsessive, psychotic denial of reality." At least, that's what Price says to convince Angela. He also says that Angela is his daughter and that he's trying to help her through a psychotic break that Whiterose fostered. However, Price is a character I trust even less than Whiterose, so not only am I not entirely convinced that Price is Angela's father (though it does explain his obsession with her), I can't be sure that he's telling the truth otherwise. He could be attempting to undermine Whiterose by converting Angela to his side. But even if Price is being honest with Angela, that doesn't mean that Price is right about the Dark Army boss— no matter what Bob Barker and Drew Carey tell you.

Whiterose is so fixated on moving the machine to the Congo that she lets her devoted assistant and lover Grant (who promptly kills himself) go to keep Elliot on. She disposes of her assistants/lovers fairly regularly, but considering that Irving reveals he once was in Grant's position, her project is obviously top priority for her. And because of Whiterose's dedication to it, I'm becoming like Angela at the beginning of Season 3 and believing that there might be some truth to the idea that Whiterose can change the course of history.

Just like Whiterose, I don't believe in coincidences — well, at least not in the world of Mr. Robot. Unless Esmail is inserting red herrings, there is a point to every little reference that he incorporates. So it's intentional that toward the end of "Eps3.9_shutdown-r," Elliot walks by a store that is playing 1978's Superman in the window — and that the scene is when Christopher Reeve's Superman flies around the earth and rewinds time to save Lois Lane.

I also don't think it's a coincidence that Mr. Robot embedded the data to reverse the Five/Nine hack in a photo of a young Elliot and his dad dressed up as Marty McFly and Doc from Back to the Future. Now, you could argue that Superman and Back to the Future are used to reference how Elliot is able to change the past by undoing the hack. But fixing a mistake is not the same as going back in time and making it so it never happened. As both Mr. Robot and the person that Darlene befriends after the end credits say, undoing the hack might not fix anything. And even if Whiterose can make it so the hack never occurred, things still might not improve.

Whiterose probably experienced a loss when she was younger that she cannot accept, just like Elliot and Angela. And just like Elliot undoes the Five/Nine hack for himself, Whiterose most likely wants the machine up and running in the Congo for her own selfish reasons. But as most shows and movies about time manipulation have warned, there are always unintended repercussions when it comes to changing the past. So if Whiterose really does want to change the past and is capable of doing so, it still could not make life any better for anyone, which Elliot might realize once he sees what happens to the world now that he has recovered E Corp's data.

It would be heartwarming to see Edward Alderson and Emily Moss alive again, but I'm not entirely certain Mr. Robot will end with a big family reunion. So Elliot helping Whiterose is probably bad news. At least Elliot makes amends with his Mr. Robot side in the Season 3 finale. With his brain operating at full capacity, he should be able to figure out what Whiterose's plan is. That means fans are one step closer to knowing what this machine is and what it's capable of — even if they'll have to wait until at least next season to find out.