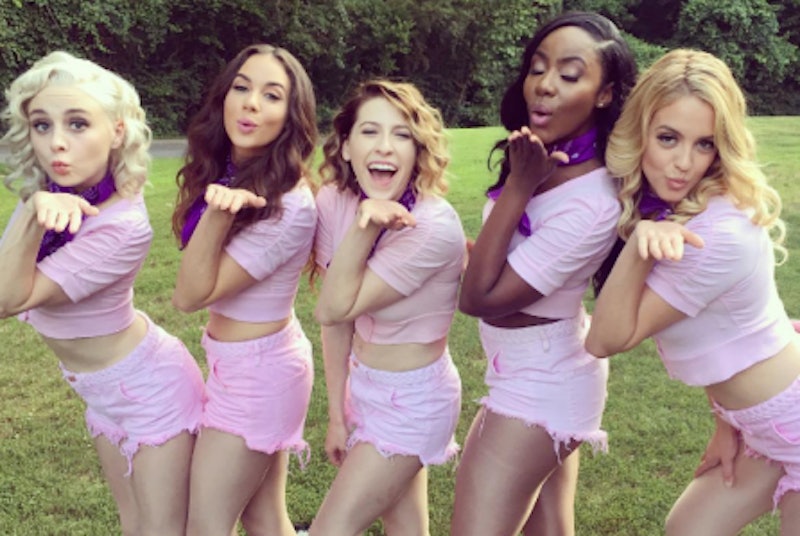 Step Sisters might seem like your typical dance movie such as Step Up or Stomp The Yard, but this Netflix film, streaming as of Jan. 19, is nothing of the sort. Instead, it's a comedy about race relations between the Black and White community, written by Dear White People's Chuck Hayward. The story follows Black college student Jamilah (Megalyn Echikunwoke) who gets asked by her dean to teach the art of Black Greek stepping to a White sorority whose chapter might be terminated due to a scandalous party. When Jamilah agrees, she faces scrutiny from both the sorority and her parents. Her biggest skeptic, though, is her White boyfriend Dane (Matt McGorry), who consistently uses his "woke" mentality of being an African-American studies major to narrate Jamilah's Black college experience in a way that'll seriously resonate with many people watching the movie.

As Step Sisters depicts, White people who use their knowledge of Black history to relate and connect to what Black people go through today might mean well, but they can't actually understand what it means to be Black. Throughout the film, Jamilah and Dane have several conversations based off the different Black and White experiences on campus. When Jamilah decides to take on the role of step teacher for the White sorority girls, Dane doesn't give her his full support, as he sees her decision to get involved as "betrayal to her own community."

He's not just ignoring her valid reasons for agreeing to teach the women — Jamilah needs get the dean's letter of recommendation to Harvard Law School — but he's out of line and ignorant. Stepping is a dance style that is mostly performed by African-American fraternities and sororities on college campuses, and Jamilah has every right to teach it to others. Dane simply wants to believe that he knows Black history well enough to tell Jamilah what she can or can't do, and he ignores her own own personal agency in favor of his performance of Blackness.

White people like Dane's character might not realize their own problematic tendencies, as the notion of “woke White liberal” is viewed as meaning that a person is in full support of Black lives and Black equality. But that's not enough; knowing the history of Black oppression is good, but White allies can't fully understand today's tense race relations despite their best intentions. And when they try, they sometimes come off condescending and ignorant, as Dane does so often in the film. Throughout the movie, he tells Jamilah how she should feel when it comes to the struggles she faces from the White sorority members and the college dean. But even if he or she wants to make a conscious effort to understand the things people of color go through, a White person should never tell a person of color how they should feel about their individual experience or an act of racism.

Too many people do this, however, and it can cause them to think they deserve pats on the back for being woke and supportive. White people might think they're doing good here, but they should let their Black peers speak for themselves and not tell them what they should or shouldn't feel, especially when it comes to discrimination. Step Sisters depicts this all too frequent situation, and its portrayal of the often overlooked or unspoken gray areas of crossing racial lines and cultural appropriation makes the Netflix movie a must watch. This particular satire about race relations helps continue important conversations, and get White viewers to understand when they need to step back and let Black people live their experiences for themselves.