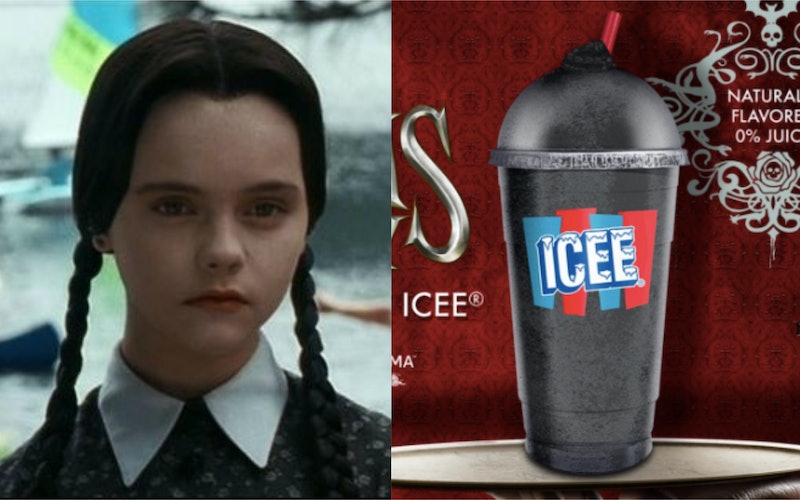 If I go to the movie theater, I'm driven 7% by the love of cinema and 93% by the love of snacks — but when the love of snacks is combined with the love of film, that's 100% happiness. Now there's a new themed drink that meets all of my needs, with the arrival of The Addams Family Spooky Black Cherry ICEE from AMC Theatres. Just in time for the new The Addams Family movie, coming out Oct. 11, you'll be able to snag this spooky, spooky treat at participating AMC Theatres and totally up your movie-watching game.

And Black Cherry isn't just a flavor — this ICEE is black enough to fit in with the entire Addams Family aesthetic or to remind you of your cold, cold black heart. It's a win-win, no matter which way you play it.

If you're not familiar with the new film, it looks like a total winner. "Based on the famous New Yorker creations of Charles Addams, this animated action-comedy will follow the Addams family whose lives begin to unravel when they face-off against a crafty reality-TV host while also preparing for their extended family to arrive for a major celebration, Addams-style," the description explains.

This animated version may feel like a big jump from the beloved 90s film, but it has a star-studded cast lending their voices to the project. Oscar Isaac as Gomez, Charlize Theron as Morticia, Chloe Grace Moretz as Wednesday, Finn Holfhard as Pugsley, and Allison Janney as Margeaux Needler (the villain of the film), will be taking center stage and are sure to make the new animated version a success among fans.

And now you can enjoy it in style, with an ICEE to help you channel your inner Morticia — or, in my case, Wednesday. All hail, Christina Ricci for speaking to my awkward millennial kid soul.

Of course, AMC Theatres isn't the only place getting in on the The Addams Family Action. Kids of the '90s and wanna-be goths alike are reveling in the return of the creepiest family out there, who managed to get us though some of our darkest and most awkward times.

One of the most exciting developments was the IHOP's Addams Family Menu — because nothing says Addams Family like breakfast foods with an added layer of creepy. The menu featured Addams-y twists on their favorites, such as Wednesday's Web Cakes, as well as gothic drinks like Uncle Fester’s Chocolate Ice Scream Shake and Morticia’s Haunted Hot Chocolate. If you aren't going to check out the movie in theaters, then this might be the next best thing (and arguably far more delicious).

Whether you're a huge fan of the '90s movie, you're highbrow enough to love the New Yorker cartoons, or you're just here for the ICEE, there are a lot of reasons to check out the new The Addams Family movie. And Oct. 11, just weeks before Halloween, is the perfect time to touch base with your favorite creepy family. If you happen to hit up an AMC, keep your eyes peeled for the The Addams Family Spooky Black Cherry ICEE, the sweet and spooky treat that you've been waiting for.