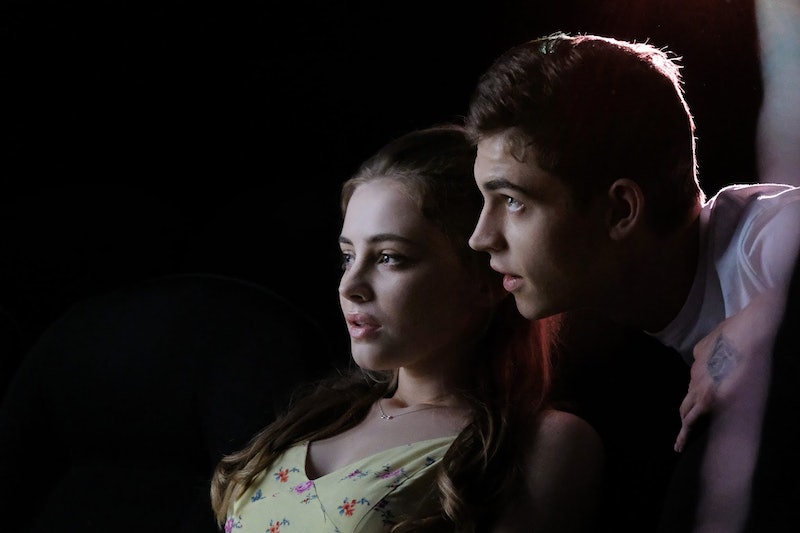 It's a sign of the times that the new movie After is Harry Styles fan-fiction come to life. And for those who are wild about Harry, this movie casts him as a romantic bad-boy with a secret. So, it's only fitting then that the new After trailer would drop on Valentine's Day to make fans fall even more in love with Styles and the character he inspired.

In After's new trailer, college freshman Tessa (Josephine Langford) comes to face to face with a mysterious dreamboat named Hardin Scott (Hero Fiennes Tiffin). That British accent, those hand tattoos, that guitar: how could she possibly resist him? But resist, Tessa, who is committed to her high school sweetheart, does, turning him down during a game of truth or dare. Yet, she can't stop thinking about this guy who seems to be everywhere.

"Who is Hardin Scott?" Tessa asks as Selena Gomez's "Good For You" plays, a cheeky clue at what he ends up doing to her. Whether she wants to admit it or not, Hardin helps Tessa see who she is and what she really wants out of life, but is she seeing the real him?

The film, based on the popular 2013 YA novel of the same name, in theaters April 12, is being sold as a "teen 50 Shades of Grey," according to Collider. And while it's true that Hardin is giving some serious Edward Cullen vibes — just, you know, without all the skin sparkling — the real fans know that After is really based on a Harry Styles fan-fic.

Back when the teaser for After first dropped, the former One Directioner's fans wanted to make it very clear that in no way is this story based on Styles' real life, which also might be why the film isn't leaning too hard into any similarities between this character and the pop star. (Harry Styles' name was changed to Hardin for the book series in 2014, as reported by Cosmopolitan.) This is purely a work of fiction from author Anna Todd, who started the five-part series on the storytelling platform Wattpad before getting a book deal.

In fact, in 2014, Todd told Cosmopolitan that she wasn't even all that into One Direction before writing this series. She was actually a bigger fan of The Fray, until she ended up down a YouTube rabbit hole of 1D videos. No surprise, that got her hooked on these guys, especially Styles. "I was reading fan fiction but I had never read 'Punk Harry' fan fiction," Todd told Cosmo, so she created it herself.

After might be straight-up fiction, but Styles's real life is the inspiration behind the CBS's Happily Ever After. The sitcom is very loosely based on the time the comedy's executive producer Ben Winston let Styles stay in the attic of his London home for 18 months.

At a panel at last summer's Television Critics Association press tour, Winston said that he didn't "think anyone knew he was living with us," except for maybe a few neighbors, according to USA Today, but Styles enjoyed living in a suburban house instead of a mansion by himself.

But, even this take on Styles is only partially inspired by the real Styles. "We had a chat," Felix Mallard, who plays Styles' proxy Cooper James on the show, said at the TCA panel, according to USA Today. "He gave us a call and described what it was about," he then added that Cooper's "definitely not based on Harry."

Sure, it would be nice to spend this Valentine's Day with the real thing, in an attic apartment or anywhere else, but all this Harry Styles-inspired content will have to do for now. So no one will blame you for playing this trailer on repeat for the next 24 hours or so.