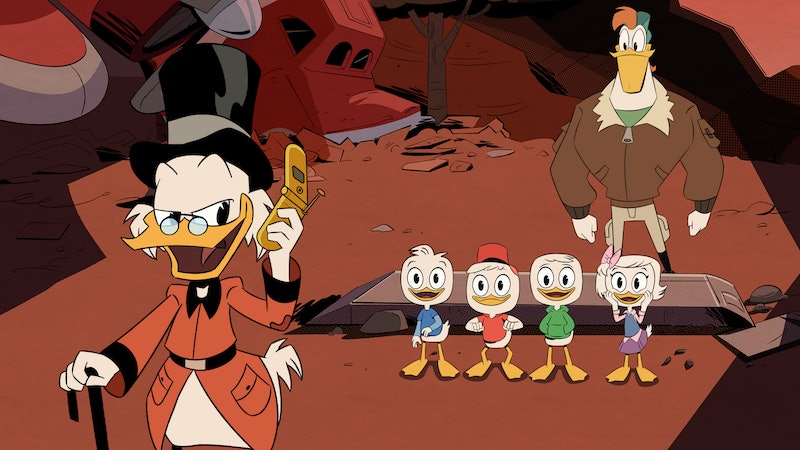 While the new DuckTales theme music changes up the vocalist and some of the instrumentation, it still features all the same lyrics and has the same jovial tone of the original. The new DuckTales theme, performed by Felicia Barton, swaps out its iconic horns and a strong bassline for some exciting synths and some diverse percussion, but the spirit of the original is still there.

Youtube user Yello took it upon themselves to set the sequences next to each other, and looking at them simultaneously highlights some interesting patterns. For example, the "race cars, lasers, aeroplanes" lyric is timed exactly to corresponding shots in both, even giving Launchpad MacQuack nearly the exact same amount of screentime for that lyric in each version of the song. At the point that Scrooge and the nephews are exploring a dungeon in the original, Webby and the nephews are exploring a dungeon in the new one. Both intros even feature the cast getting chased by mummies at the exact same time. This attention to detail proves that the creative forces behind the new DuckTales are putting their hearts and souls into the project. And fans should probably keep an eye out for more references to the original series as the reboot goes on.

Of course, just having a good theme song doesn't make the new DuckTales as good as the original. But while it doesn't indicate the quality of the show, it's nice to see that that the forces behind the reboot care about the show just as much as its fans.