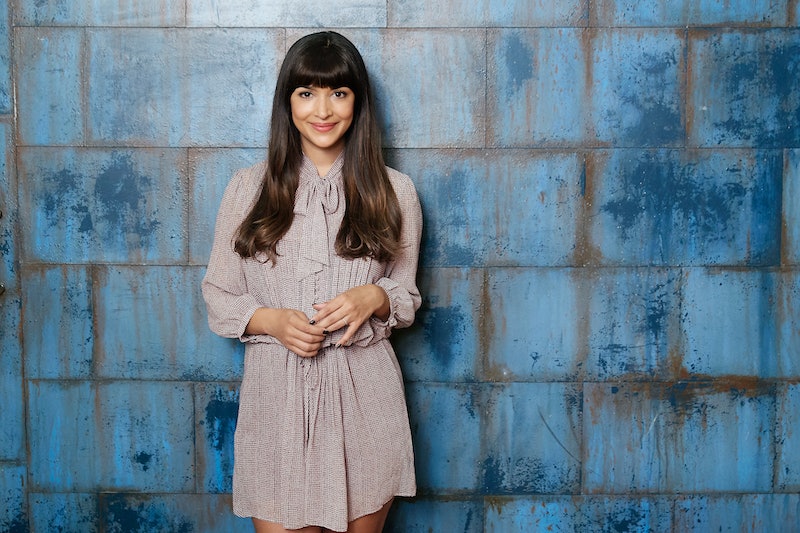 New Girl's seventh and final season debuts on April 10, and though the last batch of episodes will only air over eight weeks, don't worry — there's plenty to be excited for. According to star Hannah Simone, who plays Cece, New Girl Season 7 will have Easter eggs for fans who have been around since the beginning. And since the new season kicks off with a three-year time jump, the show finds plenty of clever ways to delve into both the past and the future.

"I think that [creator] Liz Meriwether, and all of us, were really paying attention these past seven years to what the fans really loved and wanted to see," Simone tells Bustle. "And so we had these eight opportunities to kind of show where [the characters] were in the future, but also be able to answer questions from the past that we never did." One of those Easter eggs for longtime New Girl fans, Simone says, is the reveal of what the very first classic "Winston-Cece mess-around" was — fans will learn the origin of Winston and Cece's inside jokes and hijinks. "I thought that was a really cool gift for the fans, to show how that all started between the two of them," she says.

The time jump finds Cece and Schmidt a couple years into their marriage, and now they're parents. While it might seem that their stability as a couple would make for boring TV after so many seasons watching Cece and Schmidt's romantic entanglements, Simone is glad that this season allowed her to explore other aspects of Cece's personality outside of her love life.

"The last full season we shot, Cece and Schmidt were married. And I remember there was just a sense of relief from that for Max [Greenfield, who plays Schmidt] and I, because for five seasons, we’d played that will-they-won't-they dynamic, which took up a lot of our storyline," Simone says. Instead of creating any "false conflict" between Schmidt and Cece, according to Simone, the writers allowed their characters to fully devote themselves to parenthood and their careers. "You really get to see Cece figure out her career and where she’s at [in the new season], what she wants to do, and figure herself out as a mom because her relationship with Schmidt was so solid," she continues. "It’s really nice."

Cece has grown a ton since fans first met her in Season 1, and Simone says she's loving taking on this new stage of life with her character. "Cece as a mom is great. It’s great because you know, children have a mind of their own, so you’re trying as an adult to corral a tiny young mind and it’s just very funny," she says. "It’s funny to watch her deal with it, and see the amount of love Schmidt always had for Cece, he now has for his daughter. To watch this little girl run him was really funny."

This deep bond with Schmidt is a far cry from what Simone says she imagined for her character when she first got the role of Cece. When I ask her about some of her favorite memories of playing Cece over the years, she says she always goes straight back to the beginning — the very first scene Cece ever shares with Schmidt, Coach, and Nick. "She's facing across from the three boys, and Schmidt is just laying it on extra thick. She is disgusted and bored by him at the same time," she laughs, adding that she thought Cece wouldn't ever take these guys seriously. "And then in Episode 4 she ends up in bed with Schmidt! What?! Are you kidding me? I was so, so taken off guard. It was just really funny. I remember thinking, 'This is going to be such an interesting show,' because they play it true to life. We don't pick the people we fall in love with. Things just happen sometimes."

Of course, emotions were running high as Simone and the rest of the crew shot their final scenes. She describes the final weeks on set at New Girl as if they were the nostalgic last days of a relationship she knew was going to end. "It’s kind of like if you were in love with the love of your life, and someone was like, 'So, I’m going to break up with you — in eight weeks. No one’s moving out for eight weeks,'" she says. "And you both really love each other, and no one did anything wrong, but you know in eight weeks that the relationship’s going to end. It’s heartbreaking."

"I think it’s very rare in life with something you love that you get to say an actual, proper goodbye."

She's thankful, though, that the show was afforded this goodbye. As New Girl's sixth season wrapped, there was some doubt over whether it'd come back, according to Deadline, but luckily for fans and the cast, the they were given the opportunity to wrap the show up with a final season. "I think it’s very rare in life with something you love that you get to say an actual, proper goodbye," Simone says. "So I’m really happy that they gave us that opportunity, just as human beings who all work together and built the show together for so long, we got to really say that goodbye for ourselves and for the fans."

New Girl has cultivated characters and narratives over the years that have really withstood the test of time, and according to Simone, these last episodes will be a fitting sendoff for everyone who's been along for the ride.