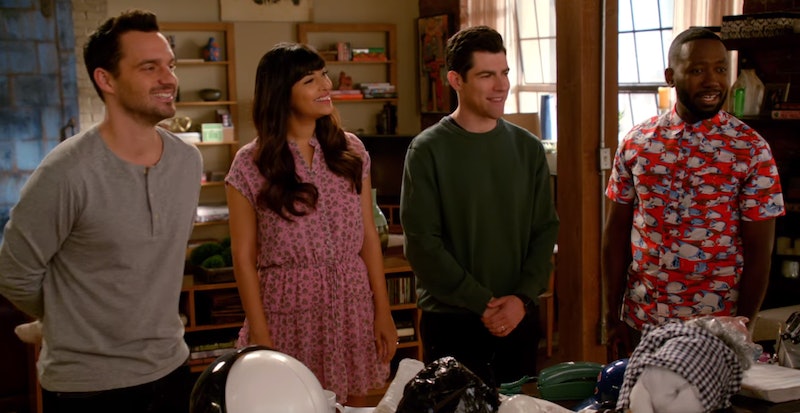 It's time to pack up the loft, but at least the New Girl Season 7 trailer promises one last game of True American before the gang leaves their old haunt behind for good. As reported by TVLine, the final season will pick up a little over three years after Nick and Jess shared that epic elevator kiss. Since then, Schmidt and Cece's daughter, Ruth, has arrived (and Schmidt has grown a mustache), Winston and Aly are expecting their first child, and when the season begins, Nick and Jess will be just returning from an eventful book tour. Basically, everyone is all grown up, and feeling a little a nostalgic for the old days if the trailer is any indication.

Fox's first trailer for the final season promises that Jess and her pals will be "friends, roommates, and idiots" until the end. But there's no denying that a lot has changed since Jess and Nick's reunion. For one thing, it's not clear who is still living in the loft — Jess and Nick are a safe bet, but what about Winston and Aly? TV Line's exclusive pictures from the premiere reveal that Schmidt, Cece, and Ruth appear to still be living in the house they spent so much of Season 6 renovating, but everyone else's living arrangements are up for debate.

What's not up for debate is how amazing the quick scene around the 18 second mark that appears to show Nick and Winston playing True American is. The confusing, yet brilliant game has been a staple of the show since Season 2, and it just wouldn't be right for New Girl to sign off without the characters playing one more round.

New Girl had yet to be renewed when the Season 6 finale aired, so there was a chance that the final scene of the show would be the elevator kiss. However, it seems that the cast didn't see that ending as a particularly satisfying way to wrap up the show. In an interview with Aol, Jake Johnson explained,

"And Zooey [Deschanel] and I, we've talked a lot about Nick and Jess, and she and I have always had a take on that relationship. And we were both like, that didn't feel like it was "the thing." You do a kiss and a cool song comes on, and you could end it there, but as the guy who plays that character, it didn't feel right."

The last episode of Season 6 did feel final in many ways, but having eight more episodes to say goodbye should allow the writers and actors to offer up a satisfying ending for all of the characters. It also allows the show to bring back many of its classic guest stars. According to TVLine, Damon Wayans Jr., Dermot Mulroney, Jamie Lee Curtis, Rob Reiner, David Walton, and Nelson Franklin are all set to appear in Season 7. They'll be joined by J.B. Smoove, who has been cast as Winston's dad, and Tig Notaro, who is appearing in a mystery role.

If the thought of New Girl ending makes you feel as emotional as Jess is at the end of the trailer, then at least you can take comfort from the fact that you're not alone. Saying goodbye to Jess, Nick, Cece, Schmidt, and Winston is not going to be easy, but at least these final eight episodes appear to be packed with throwbacks to all of the things that have made the comedy so much fun to watch over the years. From True American to the return of Coach, there's still a lot to look forward to before the series finale airs on May 15.