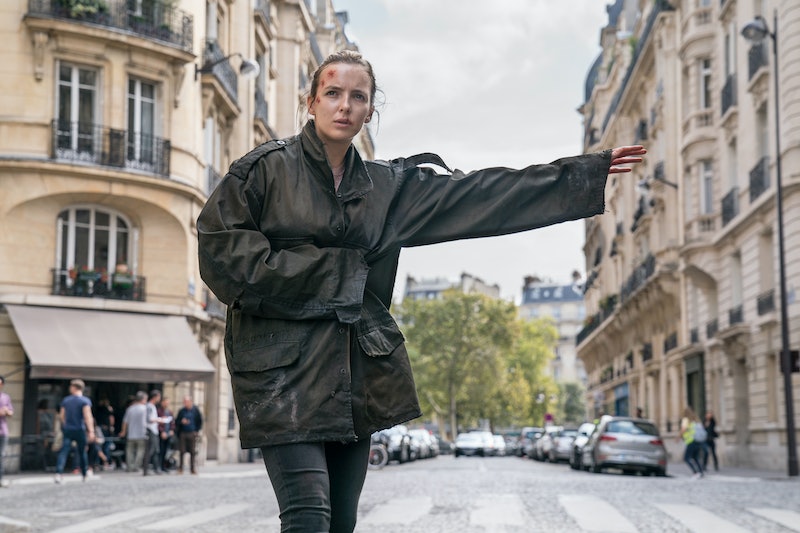 BBC America's brand new trailer for Killing Eve Season 2 reveals just how deep and twisted the obsession is going to get between assassin Villanelle (Jodie Comer) and MI5 intelligence officer Eve Polastri (Sandra Oh) when things kick off this April — and the rollercoaster of emotions doesn't stop there.

The clip opens with a glimpse of Villanelle, as she eerily reveals in a voiceover, "Sometimes when you love someone, you will do crazy things." While its unclear exactly who her comments are about, Eve and Villanelle’s relationship was so unpredictable in the first season that you never really knew if they were going to kiss each other or kill each other — spoiler alert. The Season 1 finale left fans wondering where the relationship between the professional killer and the officer determined to catch her would stand after Eve finally found Villanelle's flat. When Eve collapsed on the bed beside her, Villanelle became confused by her emotions, and then Eve stabbed her, leaving the lines between them even more blurred.

Villanelle, of course, survived the attack, and from the looks of it, she's continuing on her murderous voyage while changing into several different personas throughout trailer. The new clip also alluded to the notion that both Carolyn Martens (Fiona Shaw), head of the Russian MI6, and Eve are initially unsure whether or not Villanelle actually survived the stabbing. Carolyn seemingly urges Eve to continue going after Villanelle as she, too, tries to understand their obsession with one another. In one scene, Carolyn asks Eve point blank, "Why are you and Villanelle so interested in each other?"

During the 2019 Winter Television Critics Association (TCA) press tour, Oh and Comer shared some insight into the upcoming season's narrative. "What is most interesting about Eve stabbing Villanelle ... is Villanelle’s reaction to that, and just how emotionally she perceives that," Comer said per The Hollywood Reporter. "It both affects them and changes them in a way neither of them are quite expecting. At the start of the series we see Villanelle in a very different way. She has no control of the situation."

Oh agreed, adding, "You see them vulnerable in slightly different ways. They’ve crossed a line and there’s kind of no going back. We have a lot of energy at the beginning of the series and that pushes both of them into a different place of vulnerability."

And just when it seemed that the complicated cat-and-mouse relationship between Villanelle and Eve couldn't get more weird, the second season will seek to stir up some new drama between the two by adding another psychopath to the mix. Amidst their Winter TCA press tour, which also included Shaw and executive producers Sally Woodward-Gentle and Emerald Fennell, it was revealed that Eve will begin hunting a new killer early-on in Killing Eve's Season 2, according to IndieWire. So there's no telling how entangled things are going to get should Villanelle become jealous of Eve's new pursuit.

Though the new trailer is only just over one-minute long, the details are enough to know that Killing Eve's forthcoming season is going to be one to watch when it premieres on April 7.

More like this
Who Plays Trent In 'Never Have I Ever'? Benjamin Norris Calls His Character A “Himbo Stoner”
By Grace Wehniainen and Radhika Menon
Everything To Know About 'Westworld' Season 5
By Sophia Moore
Everything To Know About 'Evil' Season 4
By Meguire Hennes
'The Sandman’s Ending Is A Departure From Neil Gaiman’s Comic Book Series
By Kadin Burnett
Get Even More From Bustle — Sign Up For The Newsletter