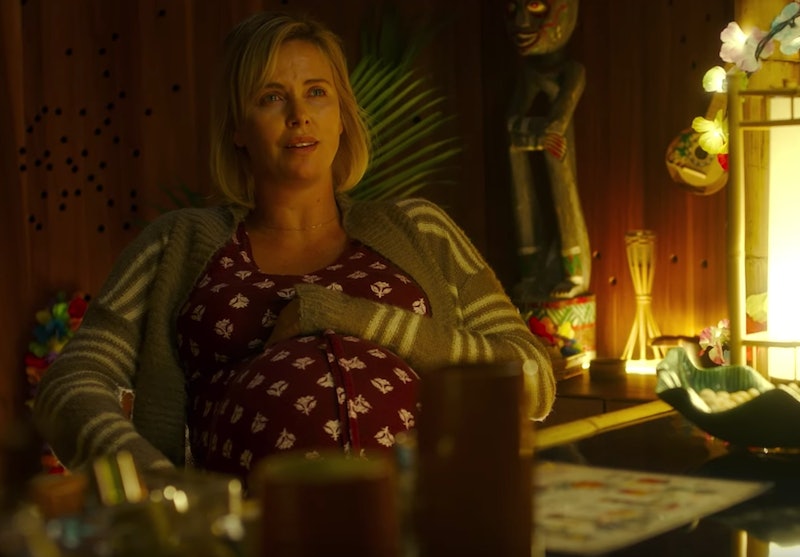 Motherhood is a lot like adulthood in general: it's so much more work than what you were led to believe as a child. And Tully, the new movie from Juno and Young Adult writer Diablo Cody and director Jason Reitman, shows exactly how exhausting being a parent can be. Tully is about Marlo (Charlize Theron), a mother of three who is struggling with a new baby. Reaching the end of her rope, she reluctantly agrees to accept a night nanny, a gift from her brother, into her home. Moms will definitely relate to Marlo's plight, but even if you don't have kids yourself or don't plan on that happening in the future, Tully will feel all too real. After all, we all know what it's like to be convinced you're failing when everyone else seems to be thriving around you.

In this exclusive clip, night nurse Tully (Mackenzie Davis) sits next to Marlo as the third-time new mom breastfeeds her youngest. "You seem like a great mom," Tully says. It's a sweet, encouraging observation, but for Marlo, it's a reminder of everything she's not. "Great moms organize class parties and casino night, they bake cupcakes that look like Minions. All the things I am just too tired to do," Marlo says. "See, even getting dressed just feels exhausting." For Marlo, making perfect, Despicable Me-themed cupcakes is the dream, and being too tired to get dressed in the morning is the unfortunate reality.

The clip from Tully gives fans a glimpse as to how Tully and Marlo's relationship will play out in the film, but more than that, it gets at the heart of one of the hardships of motherhood dealing with all the expectations placed on you, both by yourself and by those around you. It's a pressure that Theron, as a mother of two adopted children Jackson and August, could relate to. "In the beginning, I wanted to do it all and didn't reach out for as much help as I actually needed. I felt, if I don't do all of this, then maybe I am a bad parent," she said in an interview for Elle. It wasn't until later that she embraced asking people for help. "The second time, I realized I am happier and my kids are happier if I ask for more help."

Theron is also no stranger to the mommy shaming so engrained in Marlo. For the actor, her character being on the receiving end of criticism from other mothers was all too relatable "I've had a lot of moms come up to me and tell me I'm screwing everything up," said the Oscar winner in an interview for Elle. "Both my kids grew up on formula, and I remember a mom saying to me, 'You should really buy breast milk.' And I was like, What?! That's a line you don't cross."

Theron first read the script for Tully when her youngest child was around six months old. "It was when you think you'll never come out of this dark tunnel, when you don't sleep. 'This I know!'" she said at an SFFILM tribute in April, as reported by Indiewire. The movie, Theron was quick to add, is not just about the sleepless nights with a new baby, or the pressures of what it means to be a perfect mom and an adult overall. "Tully is about so much more than motherhood. It's about post-partum depression, but it's really about a woman having to find herself and make peace with ending one chapter of her life to make room for the next chapter," she said.

Tully hits theaters May 4, just in time to remind us all that great moms are people too. (Also to remind you that you better get your mom something good for Mother's Day.)