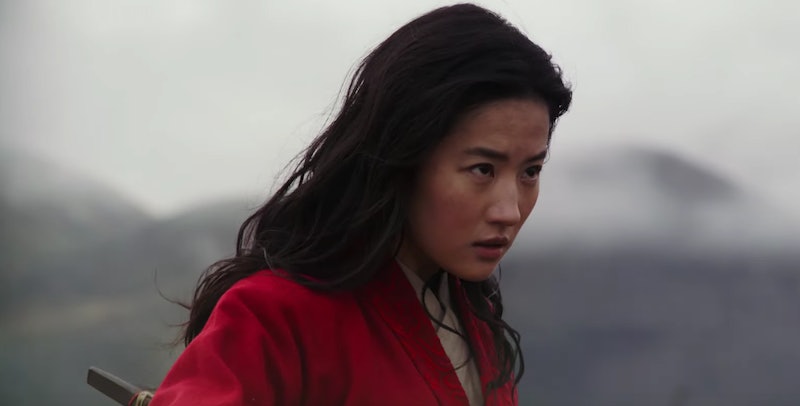 Let's get down to business, because another new trailer for Disney's live-action Mulan dropped on Thursday, Dec. 5. It's just as powerful as the first footage that was released in July, and reveals a lot of new information about the adaptation, including the introduction to a new villain, and references to a few beloved songs from the animated film.

Unlike the 1998 animated movie's villain Shan Yu (voiced by the late Miguel Ferrer), this Mulan features a new villain played by Memoir of a Geisha's Gong Li. As showcased in the trailer, Gong portrays a witch named Xian Lang, who many appear to be terrified of — and rightfully so. After all, she can turn into an eagle at the drop of a hat. And she's made an alliance with another villain named Bori Khan (played by Jason Scott Lee), who has an entire army at his disposal.

In a September interview with The Hollywood Reporter, Gong opened up about her Mulan character. "In this film, I act as a wizard who can become a hundred thousand eagles," she said, noting that the change reflected an effort by Disney to reflect the original Chinese myth of Mulan. "So Disney making this film from this foreign point of view of this ancient Chinese female hero — I think it's a really good thing," she added.

The villains aren't the only new elements to the film, which comes out on March 27, 2020. To many fans' dismay, Mulan won't be a musical like its predecessor. However, music will still be a big part of the film as proven by the trailer, which featured an instrumental rendition of "Reflection." Director Niki Caro told THR in March 2017, "We're still exploring the role that music's going to play in it, but for sure there will be music."

In addition to "Reflection," which Lea Salonga sang in the animated movie and was made even more popular by Christian Aguilera, the trailer featured references to other songs from the film. Mulan's father, Hua Zhou (played by Tzi Ma), says to his daughter, "Your job is to bring honor to your family." This quote refers to the song "Honor to Us All." Then, while in training, Commander Tung declares, "We're gonna make men out of every single one of you." Of course, this is in reference to the song "I'll Make a Man Out of You."

Even though certain elements are different compared to the original Mulan, the live-action appears to be just as powerful in its storytelling, especially with the film finally showcasing the importance of representation with an all-Asian cast and highlighting Chinese culture.

More like this
Netflix Reveals First Look At Wednesday In The 'Addams Family' Spinoff Series
By Bustle Editors
Jennifer Coolidge Just Said The Most Controversial Thing About Legally Blonde’s “Bend & Snap”
By Maxine Harrison
Before 'Bullet Train,' Revisit These Brad Pitt 'Fight Club' Premiere Photos From 1999
By Grace Wehniainen
Jennifer Coolidge Needs 'Legally Blonde 3' To Happen So She Stops Getting Hot Dog Jokes
By Jake Viswanath
Get Even More From Bustle — Sign Up For The Newsletter