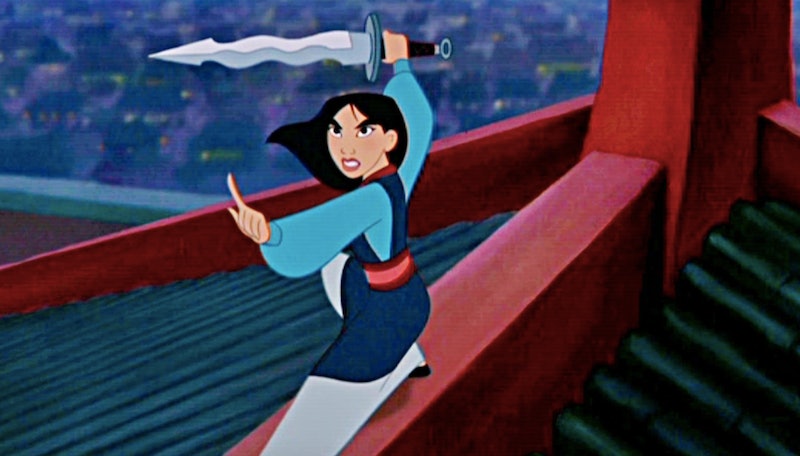 Breaking away from most films with female leads in the Disney canon, Mulan's retelling of a Chinese folktale about a brave woman warrior was a trailblazing success for Asian American representation and narratives that defy gender conventions when it debuted across U.S. cinemas 20 years ago on June 19, 1998. Two decades later, the film's timeless empowerment is in the spotlight once again with the announcement of a live-action Mulan remake to be helmed by Niki Caro and a cameo from the warrior in the upcoming sequel Ralph Breaks the Internet: Wreck-It Ralph 2. As the voice of Mulan since its original release (and in every appearance throughout video games and sequels), actress Ming-Na Wen might be one of the best sources to measure how the new remake will represent the iconic character.

“I think Disney is going to do a great job with the live action Mulan. I love what I’ve seen: little bits of Liu Yifei" — the actor who plays the titular character in the remake — "She’s a great choice to be Mulan,” notes Wen when asked about the story’s new iteration during a phone interview with Bustle days before the landmark anniversary.

Wen is uncertain on the specifics about the reimagining, but she assumes some of the decisions probably aim “to make it a little more serious like the original folklore.” But she hopes the live-action rekindles the same magic the original provided for millions of people, even if it's apparently missing some unforgettable original tunes. “I don’t have the script or anything, but at first when they said they weren’t going to even have music and songs in it, that was kind of like, ‘Oh I don’t know about that. ‘I mean it is Disney!” she says emphatically.

In addition to casting Chinese-American actress and model Yifei in the title role, the studio, as Variety reports, has also gone in a different direction than the animated feature when it comes to Mulan’s love interest: Sheng is out of the picture, and instead a new character named Chen Honghui (played by New Zealand actor Yoson An) will take his place. Another major change is the replacement of Shan Yu as the villain with a powerful witch to be portrayed by Chinese actress Gong Li. Chinese action star Jet Li has also been cast to play the emperor of China, while Hong Kong star Donnie Yen will give life to Commander Tung, who will serve as Mulan’s mentor. Considering the shift in direction, it’s still unclear weather more whimsical characters like Mushu or Cri-kee will be part of it. The project is still in the early stages of production and it’s scheduled for release on March 27, 2020.

Despite her high hopes for this effort, Wen is understandingly biased in favor of the version she was a part of. “Nothing will ever match the animation. That’s the original,” she says candidly.

Thanks to social media and how much easier it is to hear from fans now, the actress’ endearment to the character has grown exponentially in recent years. As parts of the promotion for her show Marvel’s Agents of S.H.I.E.L.D. on which she plays Agent Melinda May, Wen is constantly part of comic book conventions that bring her closer to those who also remember her as part of their childhood memories.

“I meet a lot of fans, and I see it online all the time, so I feel like Mulan is with me now more prevalent on a daily basis more than it ever was before," she says. It's an experience she says she could have never imagined when she was first thrown into the Disney machine.

“I am always really surprised and amazed at how much impact Mulan has had for millions of people, boys and girls, and now young adults, even Moms, who are now in their late 20s or early 30s who still have stories about how the character left such an impact on them,” she says.

But before she jumped into the role, Wen, like many Americans of Chinese descent, knew about Fa Mulan as a Joan of Arc of the Chinese people. “I knew it as a more serious and dark story of a girl who really sacrificed herself, wanted to join the army, and did things that weren’t the norm at the time," she offers. The actress was impressed with how the studio was able to “Disney-fy” the legend by adding wonderful sidekicks while preserving the story's essence.

“I believe the Asian-American community completely embraced it,” she said regarding the reception amongst the underrepresented community that found a heroine in Mulan.

Long before the need for inclusion and diversity became a prevalent part of every discussion across all aspects of the entertainment industry (from who is on screen, to who is behind the camera, to who is writing the reviews), Disney's decision to produce the movie was a progressive move. Before Mulan, Disney's animated films had offered no representation for Asian people, let alone Asian women. According to the Ithaca College Library archives on portrayals of Asian in American film and television, the '90s offered very limited roles for Asian American actors, and those that existed were stereotypical bit parts. Mulan, even with its Americanized vision of China, was one of the few movies that had Asian characters in the lead roles and in a positive light.

Asian American writer Nicole Clark recently wrote a piece on VICE in which she cited some of the problematic elements of Mulan, including the blatant Westernization of Asian culture; however, she also noted how important having a character like Mulan — who was not a princess — was for her growing up. “Mulan is still my first memory of anyone on screen whose experience approximated mine, as it is for many others. The lack of representation on screen meant the best we could do was love her despite these flaws,” writes Clark. The positive effect of having a character like Mulan was something Wen also longed for as a kid.

“Like so many young girls, I grew up not having a lot of representation, not just in animation but in film and television in general, so to be able to have a story where an Asian character isn’t a token Asian within the storyline but the actual lead, along with the rest of the cast making it an all-Asian film, I think says a lot about Disney’s forward thinking 20 years ago,” says Wen.

According to her, Mulan (who is a warrior and not a damsel in distress) only became an honorary princess because she is such a beloved character and Disney wanted to incorporate her in the fold of other beloved female characters. “I’m thankful for that because I think she belongs with all the popular characters like Belle and Ariel,” she says.

And on a personal level, Wen’s always felt connected to Mulan because, as she puts it, "The last thing Chinese parents or Asian parents want is their kids going into the arts for a living." By attending Carnegie Mellon University for Drama, she was defying he parents wish of her pursuing a more traditional career. However, her performances have allowed her to try her hand at many more professions her parents would approve of. “I definitely had to fight to pursue acting, but I always joke now that I’ve played a doctor, I’ve been a lawyer, I’ve been a Senator, and now I’m an agent for the government saving lives, so it’s all good,” she adds.

Speaking to Wen is basically chatting with Mulan; though she originally thought she'd need to make her tone younger to play the 16-year-old heroine, Wen says the director explicitly requested she use her natural tone. It’s the same excited and sincere voice that rises when she gets talking about the time she showed Mulan to her parents for the first time.

“My parents had no concept of what this movie would be about. They’d never watched any Disney animation. When it came out and I took them to the theatre, I remember my mom was so surprised," she says.

The surprise happened when her mother saw the scene in which Mulan sits on a bench playing with her hair while feeling defeated. She is upset because her meeting wit the town matchmaker went very, very poorly and her father, Fa Zhou, tells her that sometimes flowers that blossom later are the most beautiful of all. In that moment, says Wen, her mother said, “I saw you Ming-Na. I saw you.”

Of course there’s an explanation for that, “I guess I play with my hair a lot, and when we were doing the voice recording, they also recorded me with a video camera so that they could capture incorporate the actor’s personality or idiosyncrasies into the character as well," she says adding, "My mom was just amazed that she actually saw me in the animated character, and that was kind of cool.”

A shared voice and parallel fights to challenge the status quo have connected Mulan and Wen on a long journey. The actress has learned plenty of lessons from her animated alter ego, and believes that her wisdom is what has kept her as a fan favorite all these years.

“Its legacy is that you always have to be true to your heart and believing in yourself no matter what others try to impose on you, what society tries to impose on you as to what is right and wrong, if you have a strong conviction, but it has to be an honorable conviction, it can’t be some crazy thing where it has a negative impact on the world or on others, as long as it’s a very positive thing that you should pursue and go after in your dreams," she says.

And as long as the remake stays true to that authentic message, it can't go wrong.