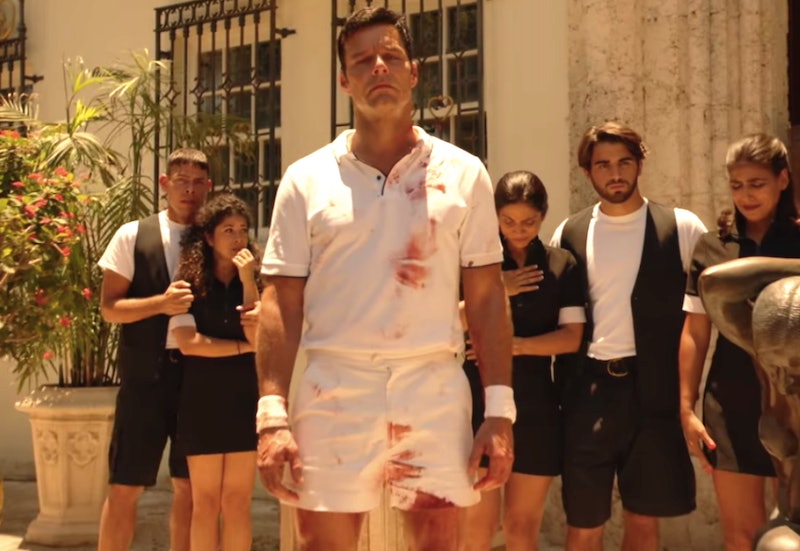 As the FX network gears up for its second season of the critically acclaimed American Crime Story, a new teaser from the Versace American Crime Story looks every bit as haunting as previous footage would lead you to believe it would be. Season 2 of award-winning franchise, which debuts on Jan. 17, 2018, will detail the harrowing events surrounding fashion icon Gianni Versace's murder in 1997, while offering fans insight into how such a tragedy was able to occur right under the nose of the FBI.

The latest footage from The Assassination of Gianni Versace: American Crime Story reveals that the series will delve into the authority's manhunt for serial killer Andrew Cunanan, who is portrayed by Darren Criss in the series. The series will also seemingly focus on the FBI's failure to hone in on important clues that could have possibly prevented the beloved 50-year-old fashion phenomenon's murder. Criss describes the investigation as the "largest failed FBI manhunt in history" during the FX interview.

In addition to those heavy issues, the season will also reportedly deal with 90s-era homophobia, according to details from Harper's Bazaar. During the TCA press tour in July 2017, show runner Ryan Murphy elaborated:

"With American Crime Story, we’re always trying to talk about a crime within a social idea. One of the reasons Cunanan was able to make his way across the country and pick off these victims, many of whom were gay, was because of homophobia at the time.“

And the teaser also depicts the fateful day in which Versace was gunned down in broad daylight while on the steps of his expansive Miami Beach home on July 15, 1997 — or, rather, FX's adaptation of it.

Considering the actual Versace mansion serves as the backdrop for the assassination, it's clear that American Crime Story intends to bring the essence of the story to life in the 10-episode anthology — just the show did with American Crime Story: The People v. O.J. Simpson in 2016. The painstaking attention to detail, and the sheer talent involved in bringing these roles to life, are sure to leave people as captivated and haunted by this crime as they were with the case of O.J. Simpson.

Deadline reports that the narrative of the second season is based on the book, Vulgar Favors: Andrew Cunanan, Gianni Versace and the Largest Failed Manhunt in U.S. History by Maureen Orth, so there may be some clues there should you find yourself unable to wait for the show's January premiere.

In addition to Criss, the miniseries also stars Edgar Ramirez, who transforms so seamlessly into the role of the esteemed designer that it immediately draws you into the storyline. Ramirez gave a personal synopsis of the series in the footage shared by the network, saying, "It is about the events leading up to the murder of Gianni Versace... but also we're going to understand how that could have been avoided." Meanwhile Academy Award-winner Penélope Cruz, who plays Versace's business parter and sister, Donatella Versace, explained the scope of Gianni Versace's impact on the world: "Versace was very loved... Everybody who met him, they were fascinated by him. And nobody expected this."

Despite the fact that his three-month killing spree had landed him on the FBI's 10 Most Wanted list, 27-year-old Cunanan somehow managed to continue to evade authorities following Versace's death, according to the Washington Post. He would eventually take his own life eight days after assassinating the Italian designer, according to the Chicago Tribune, leaving so many unanswered questions behind. While many still struggle to understand the confounding details surrounding Gianni Versace’s murder, the new series will hopefully lend a bit of clarity to the horrific situation.

More like this
Yinka Bokinni Recalls Terrifying Truth At Heart Of 'How To Hire A Hitman'
By Frances Stewart
Where Is Oscar Torres In 'Only Murders In The Building' Season 2?
By El Hunt
'Sherwood’s Filming Locations Hold Deeper Meaning
By Rachel Mantock
The “Beatrice Six” Were Awarded $28 Million After Their Wrongful Convictions
By Brad Witter
Get Even More From Bustle — Sign Up For The Newsletter