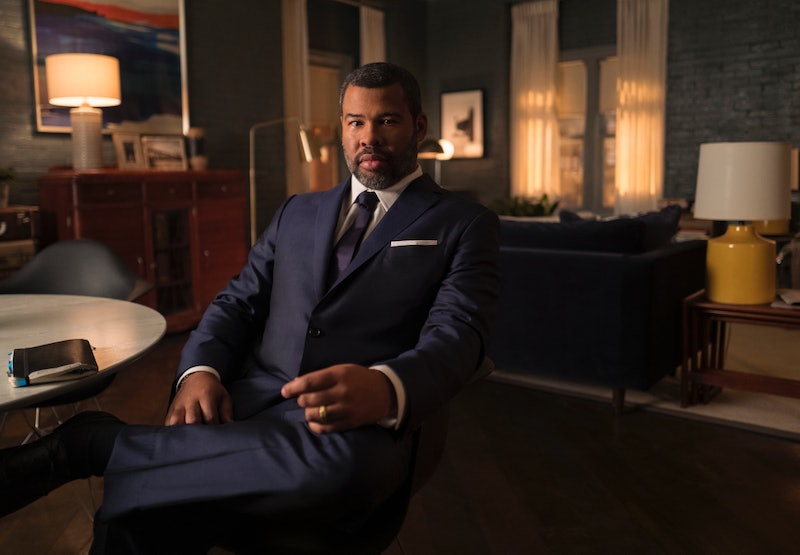 You can once again travel through another dimension thanks to CBS' new Twilight Zone reboot. And even though fans might want to compare it to another modern dystopian show, Jordan Peele's Twilight Zone isn't another Black Mirror. In fact, the creator and host has heard all the comparisons between the two shows, but he's here to tell you that they are actually extremely different. And it's for one very specific and important reason. Hint, it has something to do with technology.

In a new interview with Entertainment Weekly, Peele talked about how Black Mirror has reinvigorated the sci-fi anthology landscape that the original Twilight Zone started back in 1958. It's why the Us director focused on making sure his reboot, premiering on CBS All Access April 1, wouldn't just be Black Mirror-lite. “Black Mirror is an absolute masterpiece," Peele told EW, "and we wouldn’t have moved forward with our show if we didn’t identify what is unique to Black Mirror and what is unique to Twilight Zone."

Specifically, he didn't want Twilight Zone to delve too deep into technology, a topic that Black Mirror has seemingly mastered since its BBC debut in 2011 and its more recent seasons on Netflix, which includes the choose-your-own-adventure film, Bandersnatch. “One of the easy rules that we made for ourselves is that we don’t have to explore technology," Peele explained. "Twilight Zone covers everything else the imagination can think of.”

With his reimagining, Peele is putting a new spin on a few Twilight Zone classics. For example, the 1963 3 episode “Nightmare at 20,000 Feet" starring William Shatner as a freaked out plane passenger worried about a creature on the wing has been re-imagined as “Nightmare at 30,000 Feet" starring Parks and Recreation's Adam Scott. And, in addition to harkening back to fan favorite episodes, the new show will also add in social commentary to update these sci-fi and horror tales, like in the new episode “Replay,” in which a mother (Sanaa Lathan) and her son can't break the cycle of a racist cop's bullying.

Last year, Peele told Variety that he was nervous to bring back the Rod Serling classic, but he felt it was necessary "because it's a show that has always helped us look at ourselves, hold a mirror up to society." Speaking with EW, Peele noted, for example, that this season's episode about a young boy, played by Jacob Tremblay, who gets elected president is a commentary on our current POTUS Donald Trump.

But The Twilight Zone's commentary on society (versus technology) isn't the only way in which it differs from Black Mirror, according to Kumail Nanjiani, who stars in an episode about a comedian who makes people laugh, but at a steep price. “At its core, Black Mirror is cynical about humanity — that’s not a dig, I love the show," he told EW. "To me, Twilight Zone, no matter how dark the episode, is ultimately optimistic about humanity.”

It shouldn't be too hard to be optimistic considering the fact that this first batch of 10 episodes includes some very good actors like Tremblay, Nanjiani, and John Cho, Atlanta's Zazie Beetz, Seth Rogen, and Steven Yeun. These familiar faces might make it a little easier traveling through another dimension that promises to be very creepy and perhaps, enlightening.