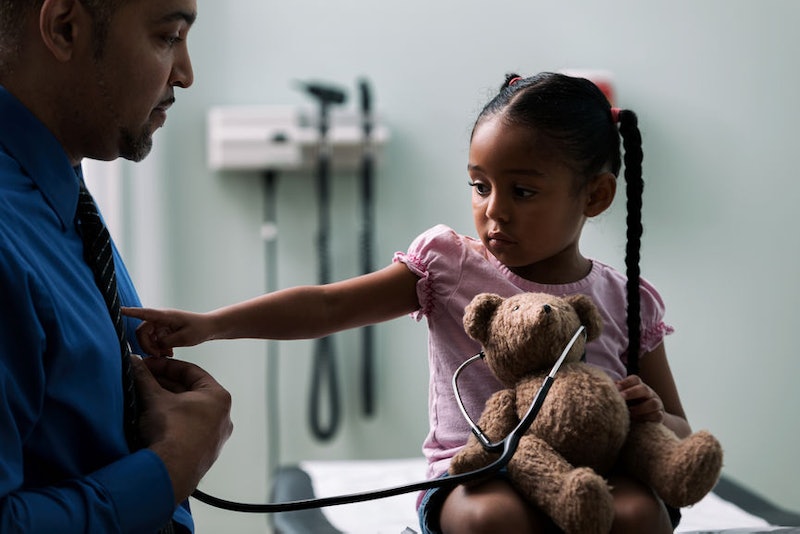 It's no secret that men disproportionately fill seats on Capitol Hill and will continue to even after a record-breaking number of women take office in January. But while men have largely been making the decisions, the number of uninsured children increased last year. This unprecedented change points to a broader trend of White House and GOP policies hurting women and children the most — especially when it comes to health care.

A report released Thursday by Georgetown University's Center for Children and Families revealed that the number of uninsured children in America actually increased in 2017 for the first time in years. About 276,000 more children were uninsured in 2017 than 2016, with nine states experiencing "statistically significant" increases, per the report.

While the study doesn't examine what led to the rise, the center's executive director, Joan Alker, told CNN the shift could be attributed to the GOP's recent attempts to dismantle the Affordable Care Act and minimize Medicaid coverage. Congress was also slow to renew the Children's Health Insurance Program (CHIP) earlier this year, leaving coverage for 9 million children in jeopardy for months.

Republicans' efforts to repeal and replace the Affordable Care Act proved unsuccessful last year, largely because two female senators refused to vote for the plan. Yet Republicans in Congress and the Trump administration have continuously tried to dismantle parts of Obamacare and make it harder for Americans to get Medicaid coverage. Like many government decisions, the most harm has fallen on women and children.

A key part of the Affordable Care Act the GOP has moved to roll back requires employers' health insurance plans to cover birth control. The Trump administration finalized a plan earlier this month that would allow more employers to opt out of covering contraception, even though the interim rules saying the same thing were temporarily blocked by two federal courts last year.

Back in January, Congress targeted another aspect of women's reproductive health care by bringing a proposed 20-week abortion ban to a vote. The measure failed in the Senate after a similar version breezed through the House.

In terms of Medicaid, House Republican's 2018 budget proposal called for slashing the program designed to provide the poor with health insurance in order to help balance the government's budget. Nearly 73.2 million people were enrolled in Medicaid and CHIP in August, half of whom were children. The program also covers low-income pregnant women who might not have qualified for Medicaid before becoming pregnant. They're covered for any health care related to the pregnancy and delivery, as well as up to 60 days of postpartum care.

Obamacare and the expansion of Medicaid had huge impacts for women and children. The uninsured rate for children dropped drastically from 7.5 percent in 2013 to 4.7 percent in 2016, per the Center for Children and Families' report. For women, Obamacare's birth control mandate helped save an estimated $1.4 billion on the pill in the legislation's first year alone, according to Planned Parenthood.

The GOP's attacks on health care seek to roll back that progress — and already have when it comes to the number of uninsured children.