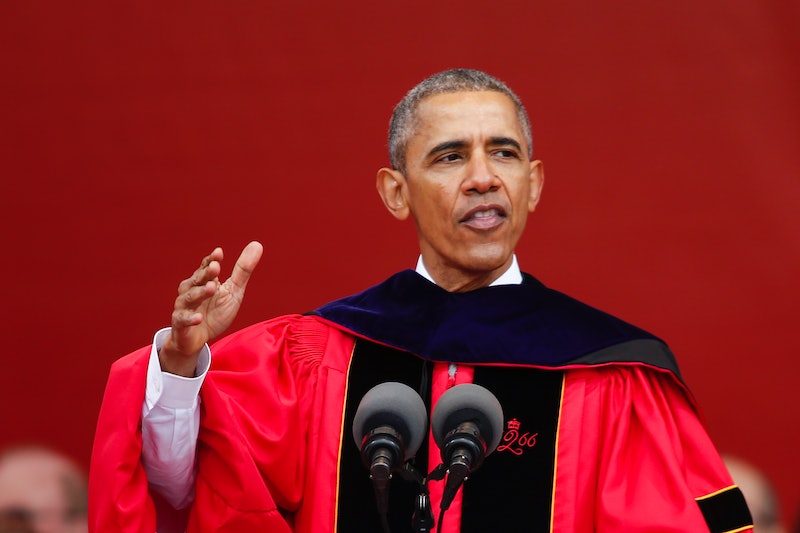 The class of 2020 may not be getting the graduation ceremony they were expecting due to the COVID-19 outbreak, but one former First Family is doing everything in their power to make sure it'll still be a day none of them will forget. Barack and Michelle Obama will give virtual 2020 commencement speeches via YouTube on Saturday, June 6, as a way to pay tribute to the 2020 college graduates all over the country who are unable to celebrate together during these trying times.

The online special is titled "Dear Class of 2020" and will feature other well-known celebs and notable figures, such as Lady Gaga, BTS, and former Secretary of State Condoleezza Rice. Each person will speak on traditional graduation themes while also providing some musical entertainment along the way. Along with the various commencement speakers and performances, there will also be special appearances made by Kerry Washington, Alicia Keys, Kelly Rowland, Chloe x Halle, Zendaya, and YouTube creators Jackie Aina, AsapSCIENCE, Dude Perfect, Mr. Kate, and The Try Guys. The multi-hour event can be streamed on the YouTube Originals channel as well as YouTube’s Learn@Home site.

In addition to the "Dear Class Of 2020" special, President Obama will also honor high school seniors a few weeks prior. He's scheduled to appear on the primetime special "Graduate Together: America Honors the High School Class of 2020," which will air on all major networks and online on Saturday, May 16.

This news comes on the heels of a petition that began circulating back in April after a high school student requested President Obama give a virtual commencement speech to graduating seniors. And like the true selfless leader that he is, the former Commander in Chief was happy to oblige. "I’ve always loved joining commencements — the culmination of years of hard work and sacrifice," Obama stated in a tweet announcing the graduation specials. "Even if we can’t get together in person this year, Michelle and I are excited to celebrate the nationwide Class of 2020 and recognize this milestone with you and your loved ones."

Lincoln Debenham, the student who originally tweeted the former President and got this whole commencement speech idea started, told CNN last month that he considered the former president to be an icon for his generation. "They got to vote for Barack Obama in mock elections when they were little kids and they got to watch Barack Obama become the first black president and get sworn in while they were in school," Debenham stated. "I remember watching that in the classroom and feeling kind of amazed at such a young age and feel like I was a part of history."

It won't be the traditional graduation ceremony many students had originally envisioned, but it will definitely make history.