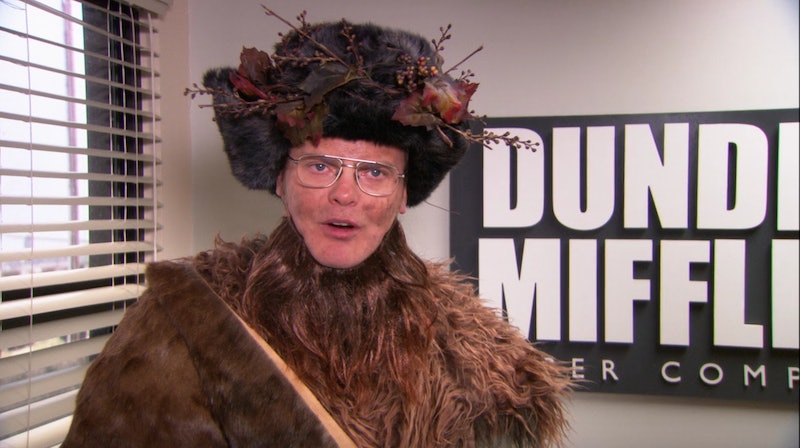 The Office is the latest classic sitcom to have a controversial scene edited out on streaming services. According to The Wrap, the show's creator Greg Daniels edited a blackface scene out of an episode The Office in response to the ongoing Black Lives Matter movement. The re-edited episode is already available to stream on Netflix — and will move with the sitcom to NBC's streaming service Peacock in 2021 — and will replace the original cut for its "syndication airings on Comedy Central and other Viacom-owned channels," the outlet reports.

The Office's Season 9 Christmas episode, which originally aired in 2012, centers around Dwight (Rainn Wilson) and his attempts to convince Dunder-Mifflin to celebrate a traditional Schrute Family Pennsylvania Dutch Christmas in the office. As part of the celebrations, he dresses up as Belsnickel, who is a "St. Nicolas-like figure in South German folklore," per The Wrap. In response, Oscar (Oscar Nunez) looks up Belsnickel online, and discovers that his partner, Zwarte Piet, is "a slave boy often portrayed in colorful pantaloons and blackface."

After Stanley (Leslie David Baker) confronts Dwight about it, the latter brushes it off and explains that he won't include that. "We don’t blindly stick to every outmoded aspect of our traditions," he says. "Come on, get with the spirit of it, you guys!" However, the scene then cuts to Nate (Mark Proksch) on his way into the party, in blackface as Zwarte Piet. (He is spotted later in the episode with most of his makeup wiped off.) Now, the scene ends with a shot of Dwight looking at the camera while texting Nate not to come in character.

While explaining his decision to re-edit the episode, Daniels acknowledged that while the scene is intended to make fun of people who uphold offensive traditions, it should never have been included in the first place. "The Office is about a group of people trying to work together with mutual respect despite the inappropriate actions of their boss and assistant manager," he wrote in a statement to The Wrap.

He continued, "The show employed satire to expose unacceptable behavior and deliver a message of inclusion. Today we cut a shot of an actor wearing blackface that was used to criticize a specific racist European practice. Blackface is unacceptable and making the point so graphically is hurtful and wrong. I am sorry for the pain that caused."

The Office is the fourth sitcom to announce that they are removing or re-editing episodes that feature characters in blackface over the past week. On June 23, Tina Fey and NBC requested that four episodes of 30 Rock featuring blackface be pulled from streaming and syndication; two days later, Scrubs creator Bill Lawrence announced on Twitter that he had asked Hulu to remove several episodes of the show which featured the white characters in blackface. Then, on June 26, The Wrap reported that Netflix had quietly pulled an episode of Community in which Ben Chang (Ken Jeong) wears black makeup and a white wig to play a game of Dungeons & Dragons.

More like this
Don't Expect To See Your Fave Modern Royals Depicted On 'The Crown' Season 6
By Jack Irvin
Jesse Tyler Ferguson Had A Funny Run-In With A Fellow ‘Modern Family’ Alum
By Grace Wehniainen
Who Is 'Stranger Things 4' Fan-Favorite Joseph Quinn Dating IRL?
By Grace Wehniainen
Regé-Jean Page Spoke Out On His Rumoured 'Bridgerton' Return
By El Hunt and Maxine Harrison
Get Even More From Bustle — Sign Up For The Newsletter