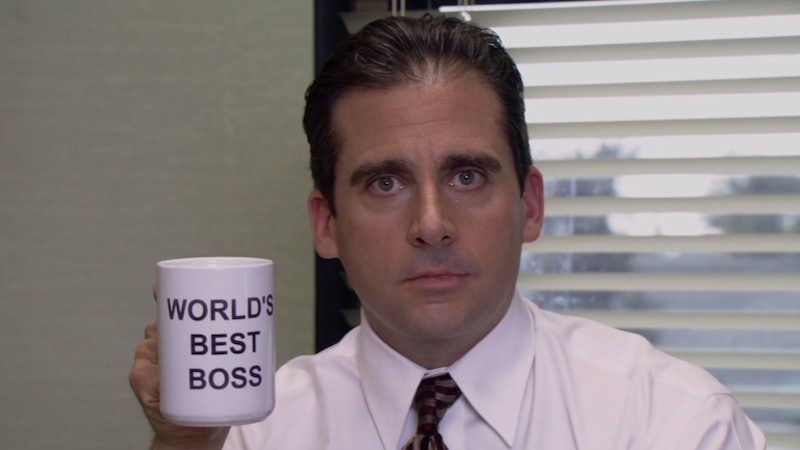 The Office has been off the air for over six years now, and yet it still remains one of the most beloved sitcoms. That's why avid watchers will be pleased to know that the odds of an Office reboot actually happening just increased exponentially, thanks to NBCUniversal's new streaming service, Peacock, which is set to launch in April 2020. Rumors of getting the Dunder Mifflin crew back together again have been circulating for quite some time — Steve Carell even poked fun at the idea during his opening monologue for Saturday Night Live last year — however, there's a solid chance now that this dream could very well come to fruition.

NBCU's Chairman of Direct-to-Consumer and Digital Enterprises, Bonnie Hammer, recently told Deadline that the network's new streaming platform would be the perfect place for these characters to pop up again. “It is my hope and goal that we do an Office reboot,” Hammer told the outlet on Tuesday, Sept. 17. It was announced back in June that The Office would be leaving Netflix in 2021 and find a new home on the NBCUniversal streaming service. That alone is a huge incentive for fans to sign up for Peacock, and it turns out that might not be the only Office content coming to the site.

“The Office comes back to us in January 2021. It is my hope that we can figure what that great reboot would be,” Hammer added in the same interview. “We are having conversations.”

Several mini-Office cast reunions have taken place throughout the last few years, and the actors still keep in touch and remain close even to this day. With that in mind, it hopefully wouldn't take too much convincing to get most (if not all) of them to return for a continuation of the series. Angela Kinsey and Jenna Fischer just launched a new Office podcast together, so you know they'd be down to get the gang back together again. And they aren't alone.

In fact, during Mindy Kaling's recent appearance on Monday's episode of A Little Late With Lilly Singh, the comedian went so far as to imagine what the Office characters would be up to in 2019. The writer imagined that a modern-day Michael Scott would be trying his hand at dabbing and making "thirsty comments" to celebrities on Instagram. "The thing that I always think about is things that Michael Scott, who just loved trends and was far too old to do any of them, what would he be into?" she said to Singh. "And to me, seeing Michael Scott dab would be — cause I feel like he would do it all the time."

But not everyone shares their enthusiasm over the prospect of revisiting The Office. During an interview with Esquire last year, Carell revealed he doesn't think an Office reboot is a good idea, believing it would come across as too offensive in the #TimesUp era. "The climate’s different," he explained. "I mean, the whole idea of that character, Michael Scott, so much of it was predicated on inappropriate behavior. I mean, he’s certainly not a model boss. A lot of what is depicted on that show is completely wrong-minded. That’s the point, you know? But I just don’t know how that would fly now."

It's sad to think of a revival happening without Carell's Michael Scott at the front, but perhaps he'll have a change of heart by the time any official plans come to light. It may end up being too hard to resist. (That's what she said.)