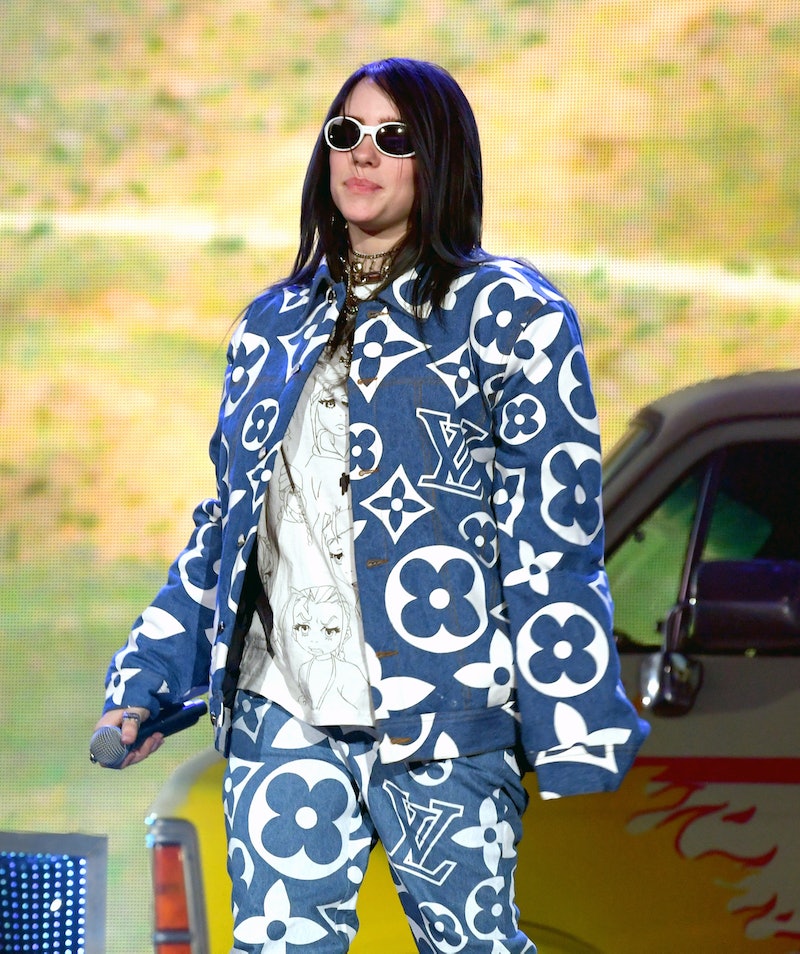 Billie Eilish is having a moment. On the heels of her buzzy Coachella performance, complete with Justin Bieber fangirl moment, Billie Eilish met The Office's Rainn Wilson, another one of her pop culture faves. Eilish's love for The Office is well documented. She sampled audio from the show for her song, "My Strange Addiction" and while headlining her debut tour used the show's theme song to open her performance.

On Friday, Wilson posted the pic of him and Eilish and made some hilarious nods to his character Dwight in the process. "I met one of the most intense OFFICE fans of all time, William Eyelash aka @WhereAreTheAvocados," Wilson captioned the snap. "She won a yoghurt lid medal for her preposterous knowledge of the show. What an honor. This is a remarkable young human being that touches hearts, blows minds and F*%#nROCKS!" (And of course, the yogurt lid medal is a reference to the episode "Office Olympics," where the lids were given out as medals.)

So, it seems the old adage that you should never meet your heroes doesn't apply to Eilish whose debut album,When We All Fall Asleep, Where Do We Go? topped the Billboard chart earlier this month. Oh, and she's only 17, meaning this is only the beginning of her cool celebrity hangouts. While most teens are busy binge watching the hit NBC series, Eilish is meeting the cast, one Dunder Mifflin employee at a time.

Yes, this isn't Eilish's first Office star spotting. Back in March 2018, Eilish met Angela Kinsey before her meteoric rise to fame. Kinsey posted the photo nearly a year later to congratulate Eilish on her first album. She wrote in her caption, "We met at the San Francisco airport awhile back and I’m a dinosaur so I had no idea how talented you are!! I have loved catching up with you on Instagram. And the song My Strange Addiction has a nice lil’ snippet from Threat Level Midnight! Your #theoffice Mom is over here rooting for you! Way to go!"

Eilish's devotion to all things The Office first came to prominence when she had to get permission from cast members involved to use audio from the episode in her song including Steve Carell, Mindy Kaling, and John Krasinski. Star BJ Novak told Rolling Stone that the approval was a no-brainer. "They had to get approval of all the cast that was on it," Novak said. "I was fine with it regardless," he added, "but I was like 'Wow, bonus: This is a banger.'" Kaling seconded that notion, tweeting, "Billie, I like your style."

Eilish's Office obsession is very on-brand for the Gen Zer, who told ELLE Magazine that her commitment to the series runs deep. "When I wake up, I put on The Office," Eilish said. "If I'm making a burrito, I turn on The Office. I need the distraction so I don't think. It's like therapy for me. I have way too much to think about and people [I don't want] to disappoint."

Well, it seems that Eilish's hours spent watching the series have certainly paid off. First Angela, then Dwight? One gets the feeling that an audience with Michael Scott himself could be in the singer's future.