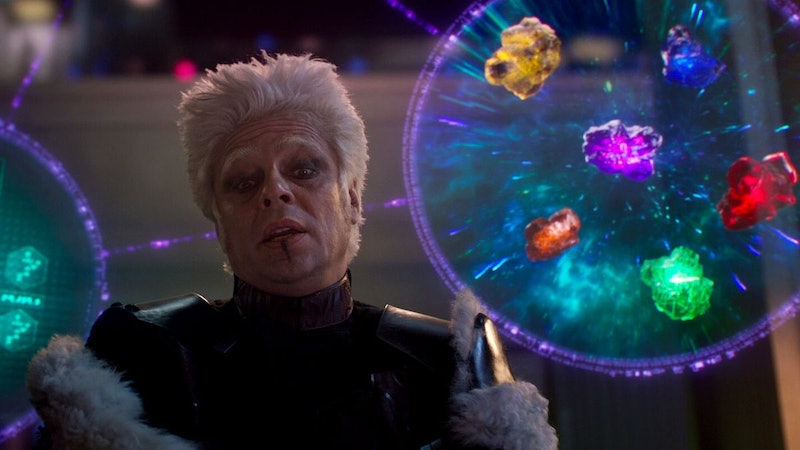 With Avengers: Endgame hitting theaters on April 26, fans of the MCU are scrambling to dig up any hints from previous movies as to what might happen in the movie. Being that it's the climactic finale to a 10-year, 22-movie series, Endgame will no doubt reference things we know from other MCU films, and may even feature characters we haven't seen in a while. But there are definitely some important moments we should look back on to refresh our memories, particularly when it comes to those all powerful Infinity Stones. Fortunately, there's one MCU scene to watch to understand how Infinity Stones work, so that's an easy bit of catch up.

The scene is from the 2014 Marvel movie Guardians of the Galaxy and features some pretty important information about the Infinity Stones, their origins, and their power. At that point in the movie, Star Lord (Chris Pratt), Gamora (Zoe Saldana), and the rest of the Guardians are in possession of a mysterious orb and take it to the mining colony Knowhere to sell it to Gamora's contact, the "Collector," Taneleer Tivan (Benicio del Toro). But the Guardians are a little ignorant as to what the orb actually is, and why it's so important. When the Collector opens the orb to unveil a shining, purple stone, the truth about the orb, as well as the other mysterious stones, boxes, and trinkets featured in other MCU movies, is finally revealed.

During the scene, the Collector explains to a confused gang of Guardians what exactly the stones are. "Before creation itself, there were six singularities," he says. "Then the universe exploded into existence, and the remnants of these systems were forged into concentrated ingots. Infinity Stones." The six stones represented all the elements of the universe: Space, Time, Reality, Power, Mind, and Soul. "These stones it seems can only be brandished by beings of extraordinary strength," he continues. "These carriers can use the stone to mow down entire civilizations like wheat in a field. Once, for a moment, a group was able to share the energy amongst themselves, but even they were quickly destroyed by it."

At the end of Guardians, the Power Stone was placed under the protection of Nova Corp. on the planet Xandar, but as we know from the first few scenes of Avengers: Infinity War, Thanos destroyed Xandar off screen and took hold of the stone for his eventual gauntlet. Infinity War then goes on to show Thanos' procurement of the other five stones. He takes the Space Stone, a.k.a. the Tesseract, from Loki, steals the Time Stone from Doctor Strange, pulls the Mind Stone from Vision's forehead, and kills his adopted daughter, Gamora, for the Soul Stone.

And Thanos' capture of the Reality Stone brought audiences back to Knowhere, back to the Collectors Museum, where Lady Sif had stored it for safekeeping after Thor: The Dark World. Possessing all six Infinity Stones gives the holder incredible power over all of the universe. As one Marvel editor pointed out on Twitter, they are all connected, and the expertise in one fuels the next stone in line.

So considering that Thanos is still hanging on to all six Infinity Stones, just how are the remaining Avengers going to defeat him? Well, according to Infinity War co-director, Joe Russo, Thanos's Infinity Gauntlet was permanently damaged after his snap that dusted half of the population of the universe. But the Gauntlet was a significant creation that allowed a single user to harness the power of all six stones, created by the dwarf Eitri. It's not clear if the mining facility used to create the Gauntlet, and Thor's new hammer/axe Stormbreaker, is still functional, but something tells me the Avengers don't have the time or the means to make it out there for a new one, and even if they did that might not be a great idea.

That means that remaining individual Avengers might have to wield the Infinity Stones themselves, and work together to combine their power. We know from Guardians that handling an Infinity Stone isn't exactly easy, although Captain Marvel seems powerful enough, considering her power comes from the Tesseract/Space Stone itself. So be it through their special new suits, new abilities, or some other way, undoing the snap caused by the Infinity Stones might only be able to be undone by the Infinity Stones.