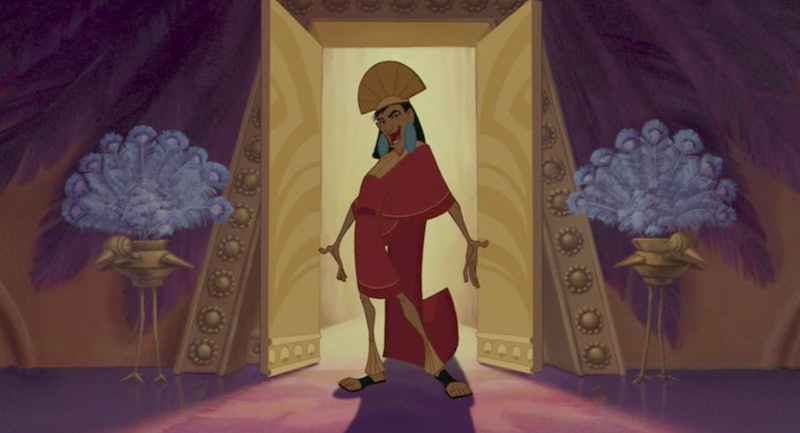 In 2000, Walt Disney Pictures blessed us with a brilliant, spinach puff-averse animated film about a self-involved Inca emperor named Kuzco and his journey toward becoming a better ruler and a better person. It is a masterpiece that should be revisited as often as possible. Alas, on Sept. 5, the Disney classic that is The Emperor’s New Groove will leave Netflix. There really is only one thing to do with this information: Fire up the library of streamable content and pull the lever that’ll send you on the nostalgic roller-coaster ride that is this movie before it’s too late.

And what a roller-coaster ride it is. When we first meet the titular emperor, he is not what you'd call a great guy: Kuzco (David Spade) is openly rude to a group of female suitors, he literally tosses an elderly man out a window for “throwing off his groove,” and he casually plans to uproot a villager named Pacha (John Goodman) so he can build a vacation manse on top of a hill. Kuzco gets his, however, when he sacks his longtime advisor, Yzma (Eartha Kitt). Incensed by Kuzco’s decision, the spindly, chemistry-savvy villain heads to her lair and plots her revenge. She tasks her bumbling sidekick, Kronk (Patrick Warburton), with poisoning the emperor, and, as is wont to happen when a bumbling sidekick is tasked with poisoning an emperor, he accidentally gives the emperor the wrong serum. After the botched assassination attempt, Kuzco morphs into a talking llama, embarks on an adventure with Pacha, and learns how to not be a monster of a leader.

As dark as this synopsis is (a terrible monarch is in charge! a character tries to murder her former boss! an elderly man is literally tossed out of a window!), this movie happens to be one of the funniest Disney movies of all time. Sure, there are important messages about friendship, being a good human, and the dangers of installing superfluous levers, but The Emperor's New Groove never once forgets that it is, above all else, a comedy. And who among us doesn't love a quotable, highly re-watchable, and hilarious comedy?

Thanks to the ridiculously clever (and cleverly ridiculous) dialogue, the slapstick jokes, that mini grammar lesson, and, of course, the inimitable cast, this movie is pure magic. It's impossible to pick a best moment: Yzma’s “I’ll turn him into a flea…” monologue, Kronk’s spinach puffs, the Double Dutch scheming session, and the scene where Kuzco and Pacha brace themselves as they float toward a rocky waterfall — the list is just getting warmed up. Let's save some ink and say, "The whole thing is perfect."

Don't be a steak cut in the shape of a trout. Re-watch The Emperor's New Groove before Kronk tosses it onto the back of a cart (i.e., it leaves the Netflix library for good).