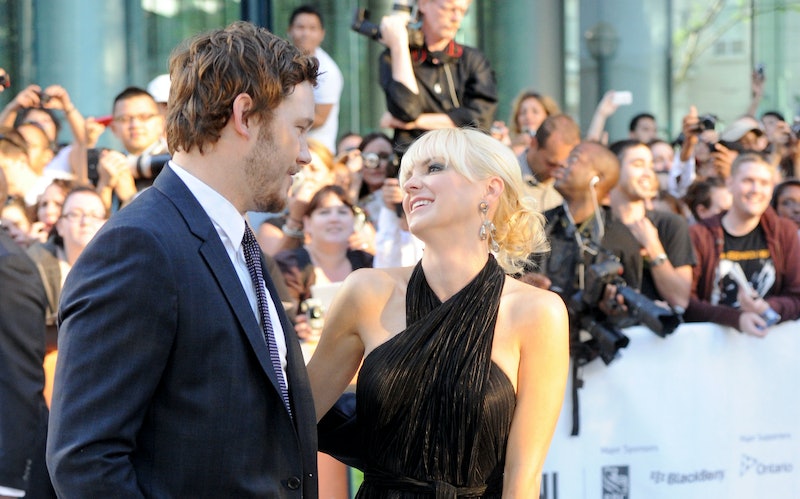 If you're like most of the people on the internet, you're probably still reeling from the news that one of everyone's favorite celebrity couples is calling it quits after eight years married. However, if you look a little closer, there's one part of Chris Pratt and Anna Faris' divorce announcement that should still give you hope and warm your heart a little bit. In Pratt and Faris' joint statement about their split, originally posted on Pratt's Facebook page, they end things on what can actually be taken as an uplifting note, if you look at it the right way.

"We still have love for each other, will always cherish our time together and continue to have the deepest respect for one another," Pratt and Faris wrote, softening the tough news. While this does really solidify the finality of their message by emphasizing that their time together really is over, it also shows that their relationship — despite the fact that it has ended — was in no way a failure. Instead, it ended with a lasting feeling of mutual love and respect and eight years of happy memories that they can both draw from in the future. Look at it this way — love isn't dead, Faris and Pratt just realized that in order for their mutual love to continue, their marriage had to end.

If you listen to the experts on the matter, then you'll learn to be even more appreciative of a civil and mutual decision to end a marriage. Just ask sex columnist and all-around relationship expert Dan Savage for his thoughts on marriages or relationships that end with both partners thinking it's the right thing to do, and you'll find that he would actually call Faris and Pratt's marriage a success. Yes, the most well-known marriage vows include the line "till death do us part," but why should the only successful marriage be one that ends in someone's death? If two people love each other, commit to a relationship, start to raise a child, and then realize — before any irrevocable emotional damage has occurred either to them or to that child — that the relationship needs to end, then that's a case in which the relationship has simply run its course. A vow has been broken, sure, but what's more important — a vow made when the two people were all hopped up on love hormones, or the emotional health of the people involved?

Don't believe all the Twitter posts about Pratt and Faris' split, how love is dead, and how there's no reason to believe in love anymore. Love is very much alive, as the two of them wrote in their announcement. Obviously none of us can know the inner workings of what went on to cause the split, but from the outside looking in, this looks like it was a mature, well-considered decision that will end up being the best, most fulfilling choice for both members of the partnership — and their son. And while it may not be the sort of Disney princess, fireworks, and rose petals sort of an ending that you want for your favorite celebrity couples, it's definitely love.